European Journal of Neuroscience, Vol. 21, pp. 591–595, 2005 ª Federation of European Neuroscience Societies SHORT COMMUNICATIONCaffeine, but not nicotine, enhances visual feature binding Lorenza S. Colzato,1 Sabrina Fagioli,2 Vicki Erasmus1 and Bernhard Hommel11Leiden University, Department of Psychology, Cognitive Psychology Unit, Postbus 9555, 2300 RB Leiden, the Netherlands2University of Rome ‘La Sapienza’, Department of Psychology, Rome, Italy Keywords: binding problem, caffeine, cholinergic system, neuronal synchronization, nicotine, visual perception The distributed organization of the human visual cortex calls for a mechanism that integrates and binds the features of a perceivedevent, and neural synchronization is a prime candidate to serve that purpose. Animal studies suggest that synchronization in thevisual cortex is enhanced by the muscarinic cholinergic system. Here we show that in healthy humans the binding of shape andcolour, and of shape and location, of visual objects is increased by stimulating the muscarinic cholinergic system (caffeineconsumption) but not by stimulating the nicotinic cholinergic system (nicotine consumption). Binding across perception and action isunaffected by either manipulation, suggesting a specific link between the visual system and the muscarinic cholinergic system.
When we are facing multiple objects, a red apple and a yellow banana, cognitive processes such as the planning of multifeatured actions say, the features of these objects are coded and processed in different cortical areas, yet what we perceive are well integrated objects and not Although the available evidence points to a link between neural mere bundles of attributes. The human brain thus seems to employ synchronization and feature binding, it remains unclear how and under some kind of feature-binding mechanism which integrates the neural which circumstances synchronization emerges, which makes it patterns coding the features belonging to a given event and makes us difﬁcult to appreciate its true functional role. A potentially important validly perceive that bananas are yellow but not red (Treisman, 1996).
observation in this context is the ﬁnding that, in the cat, neocortical One candidate for such a mechanism are conjunction detectors, that is, synchrony in the gamma band ( 30–70 Hz) is enhanced by neural units that are selective for the presence of particular feature muscarinic cholinergic agonists and disrupted by antagonists combinations (Mozer, 1991; Riesenhuber & Poggio, 1999). Coding by (Rodriguez et al., 2000, 2001, 2004). Empirical evidence for this means of conjunction detector makes sense for processing highly link is consistent with Colzato et al. (2004), who observed in humans probable, evolutionarily important feature conjunctions. However, that alcohol, which is known to cause hypoactivity of the cholinergic excessive numbers of conjunction detectors would be necessary to system (Sanna et al., 1994; Minami et al., 1997), impairs feature code any arbitrary feature combination, suggesting that frequently binding in visual perception but not binding across perception and changing feature relations are processed in a different way (Singer, action. This ﬁts with the hypothesis that the binding of visual features 1994; Colzato et al., 2004; Hommel, 2004). Better suited for this case is driven by the muscarinic cholinergic system (Metherate et al., 1992; seems to be the neural coupling of cell populations (Abeles, 1991; Rodriguez et al., 2000, 2001, 2004).
Engel & Singer, 2001), which is assumed to be achieved by The aim of the present study was to set up a speciﬁc test of this coordinating and synchronizing the ﬁring rates of cells referring to hypothesis in healthy human subjects: can it be demonstrated that, the same event, i.e. feature conjunctions may be coded spontaneously ﬁrst, cholinergic agonists increase the binding of visual features but through the temporal coherence of their neural codes.
not of other features and that, second, this increase is speciﬁcally The possible role of neural synchronization in binding features driven by agonists of the muscarinic but not the nicotinic cholinergic within the visual and the motor system has been implicated in many system? The two agonists we compared were caffeine and nicotine.
studies. Apart from numerous animal studies (Abeles, 1991; Engel & The behavioural effects of caffeine have been attributed to several Singer, 2001; Roelfsema et al., 1997), transient increases in neuromodulatory systems, including dopaminergic, GABA, serotin- synchronization in the gamma frequency range have been observed ergic, cholinergic and noradrenergic pathways (Nehlig et al., 1992).
in healthy humans in visual tasks such as ﬁgure–ground discrimination However, there is evidence for a direct muscarinic cholinergic link (Engel & Singer, 2001), switching between bistable visual ﬁgures between caffeine and the processing and short-term memory of visual (Keil et al., 1999), and the retention of visual patterns in short-term memory (Tallon-Baudry et al., 1999) Motor tasks have revealed First, caffeine impacts the muscarinic cholinergic but not the nicotinic cholinergic system (Sorimachi et al., 1992). Cholinergicsystems are under tonic inhibitory control by endogeneous adenosine,as suggested by observations of an increase of adenosine extracellular Correspondence: Dr Bernhard Hommel, as above.
concentrations in the basal forebrain cholinergic areas of the behaving cat during prolonged wakefulness (Porkka-Heiskanen et al., 1997), Received 17 July 2004, revised 5 November 2004, accepted 9 November 2004 and of dramatic decreases in waking induced by the perfusion of

adenosine into the same regions (Portas et al., 1997). Also, the state of deﬁned); (ii) the nonspatial stimulus features (e.g. shape and ⁄ or prolonged sustained wakefulness can be mimicked by increasing colour); and (iii) the response (for an overview, see Hommel, 2004).
adenosine levels in basal forebrain cholinergic regions but not by These interactions all follow the same pattern: performance is increasing those levels in noncholinergic areas (Porkka-Heiskanen impaired in partial-repetition trials, that is, if one stimulus feature et al., 1997). Given that caffeine (and other xanthines) are adenosine (or the response) is repeated (e.g. S1 shape ¼ S2 shape), while the antagonists, it thus makes sense to assume that they unfold their other is not (e.g. S1 colour „ S2 colour or R1 „ R2). This arousing impact by reducing the amount of inhibition adenosine exerts demonstrates that the mere co-occurrence of a feature–feature or on cholinergic pathways. Moreover, evidence that the cholinergic feature–response conjunction is sufﬁcient to create a temporary impact on cortical states is mainly muscarinic (Lamour et al., 1982) binding of the respective feature codes, a kind of ‘event ﬁle’ suggests a central role of muscarinic cholinergic pathways in linking (Hommel, 1998, 2004; Hommel & Colzato, 2004). Reactivating one member of this binding (as with feature repetition) spreads activation Second, a number of studies suggest that the impact caffeine exerts to other members, which calls for a time-consuming rebinding process on the muscarinic cholinergic system eventually targets visual in partial-repetition trials. Most important for our purposes, these processes. Monkey studies have shown that systemic injections of partial-repetition costs can be taken to indicate feature–feature and scopolamine, a muscarinic cholinergic antagonist, impair the encoding feature–response binding, which is why we chose them as behavioural of new visual objects but have little effect during recognition (Aigner markers. Along the lines described above we thus expected caffeine & Mishkin, 1986; Aigner et al., 1991). In humans, the intake of and nicotine consumption to decrease partial-repetition costs for caffeine attenuates the scopolamine-induced impairment of, among shape–colour conjunctions and for shape–location conjunctions (i.e.
other things, perceptual sensitivity in visual search, visual short-term visual–visual bindings), but not for shape–response or location– memory, and reading (Riedel et al., 1995). At the same time, caffeine does not modulate the impact of scopolamine on simple and choicereaction time, suggesting that caffeine has a speciﬁc effect on visualprocessing via muscarinic cholinergic pathways (cf. Smith et al., 2003). Consistent with this interpretation, a recent PET study in Eighteen volunteers took part in each study and served in two humans using a visual task provides evidence that muscarinic experimental sessions separated by 3–7 days. Informed consent was cholinergic effects modulate visual attribute processing (Mentis obtained from all participants after the nature and possible conse- et al., 2001). In particular, muscarinic action was found to predom- quences of the study were explained to them; the protocol was inate in striate cortex (Brodmann Area 17) and lateral visual approved by the local ethical committee (Leiden University, Faculty of association areas (18 and 19), whereas nicotinic action predominated Social and Behavioural Sciences). Subjects in the caffeine group in the thalamus and inferior parietal regions (areas 39 and 40). In (habitual coffee consumers: 3–5 units per day on average) and in the contrast to caffeine, nicotine is well known to induce cholinergic nicotine group were in the age range of 20–30, healthy nonsmokers, facilitation via nicotinic but not muscarinic receptors.
not on medication or drugs, and without neurological or psychiatric In view of this evidence, we assumed that, ﬁrst, caffeine would act history according to self-report. All experimental sessions were held in via muscarinic cholinergic pathways and nicotine via nicotinic the morning to prevent time-of-day effects and the possible occurrence cholinergic pathways and that, second, enhancing muscarinic but not of withdrawal symptoms. Participants were asked to refrain from all nicotinic action would affect visual feature binding. Accordingly, we caffeine-containing foods and beverages for 12 h prior to the expected caffeine but not nicotine intake to affect the behavioural experimental sessions, not to consume alcohol on the night before measure of feature integration we used, and this effect to be speciﬁc to the experimental session and to have a normal night’s rest. A double- blind, placebo-controlled, randomized cross-over design with coun- We adopted the task from Hommel (1998), which involves the terbalancing of the order of conditions was used to avoid expectancy repetition of task-related and -unrelated visual features and of the effects. Treatments were deceptive: subjects were led to believe that response (see Fig. 1). The standard ﬁndings are interactions involving they were drinking regular coffee or keeping a nicotine patch each (i) the task-related stimulus features (e.g. shape, if and only if it signals experimental session. Subjects’ compliance was encouraged by taking the response; location, if and only if the responses are spatially a saliva sample (not further analysed) at the beginning of each Fig. 1. Sequence of events in the present experiments (Hommel, 1998). A response cue signaled a left or right key press (R1) that was to be delayed untilpresentation of S1, a red or green, vertical or horizontal line in a top or bottom box. S2 appeared 1 s later: another red or green, vertical or horizontal line in the top orbottom box. S2 shape signaled R2, also a speeded left or right key press. R2 speed and accuracy were analysed as functions of the repetition vs. alternation ofstimulus shape, colour and location, and of the response.
ª 2005 Federation of European Neuroscience Societies, European Journal of Neuroscience, 21, 591–595 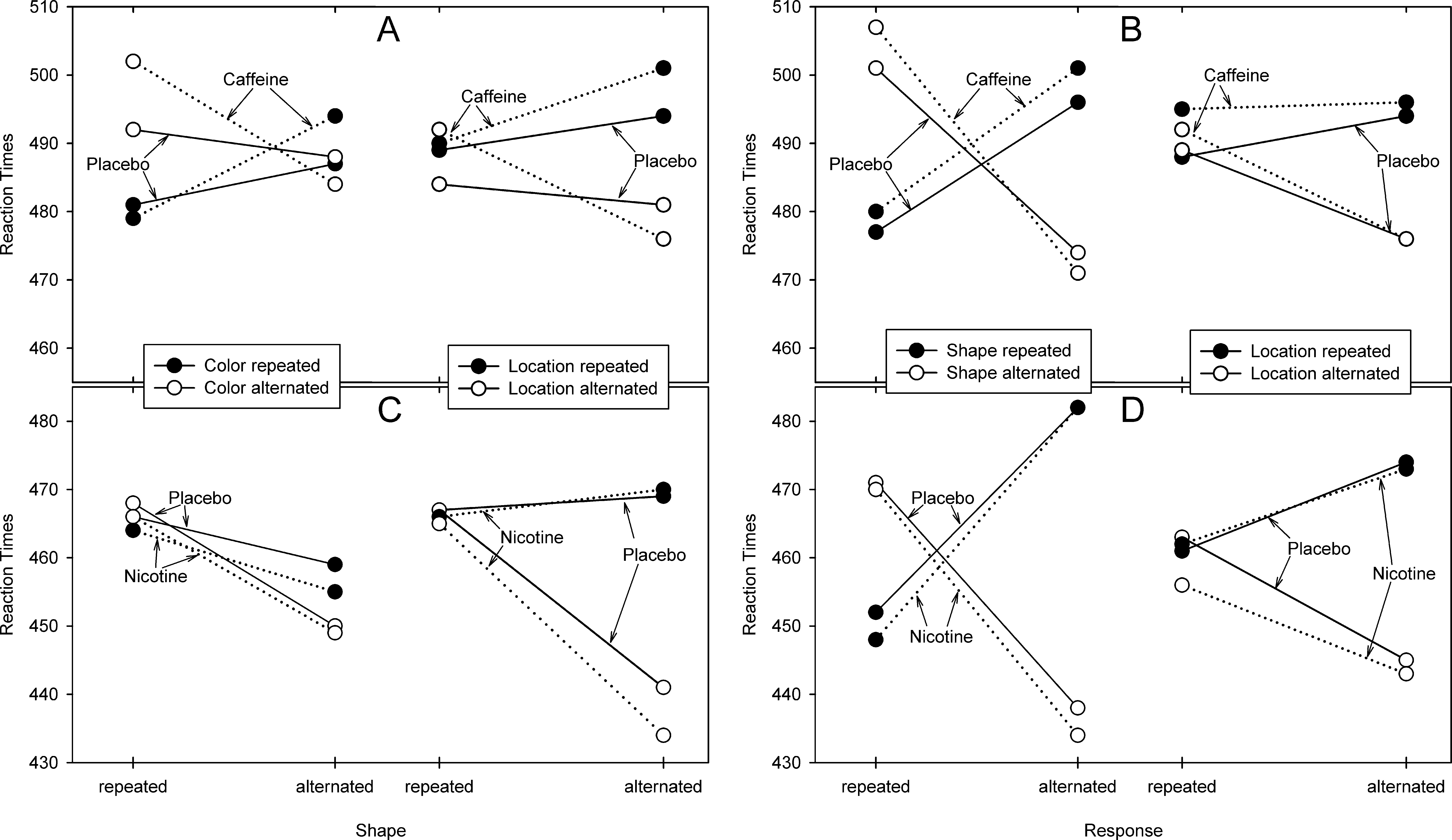