Vol. 300 No. 12, September 24, 2008
This Article
Inhaled Anticholinergics and Risk of Major Adverse
Cardiovascular Events in Patients With Chronic
Obstructive Pulmonary Disease
• Send to a friend• Save in My Folder• Save to citation manager A Systematic Review and Meta-analysis
Citing Articles
Sonal Singh, MD, MPH; Yoon K. Loke, MBBS, MD; Curt D. Furberg, MD, PhD JAMA. 2008;300(12):1439-1450.
Related Content
ABSTRACT
Topic Collections
Context Inhaled anticholinergics (ipratropium bromide or tiotropium bromide) are
widely used in patients with chronic obstructive pulmonary disease (COPD) but their effect on the risk of cardiovascular outcomes is unknown.
Objective To ascertain the cardiovascular risks of inhaled anticholinergics,including
cardiovascular death, myocardial infarction (MI), and stroke.
• Adverse Effects• Alert me on articles by Data Sources Systematic searches were conducted on March 19, 2008, of relevant
articles in MEDLINE, the Cochrane Database of systematic reviews,regulatory authorityWeb sites in the United States and the United Kingdom, and manufacturers' trial registries with no daterestrictions.
Study Selection Randomized controlled trials of any inhaled anticholinergic for treatment of COPD that
had at least 30 days of treatment and reported on cardiovascular events.
Data Extraction The primary outcome was a composite of cardiovascular death,MI, or stroke. The
secondary outcome was all-cause mortality. Relative risks (RRs) were estimated using fixed-effects models
and statistical heterogeneity was estimated with the I2 statistic.
Data Synthesis After a detailed screening of 103 articles, 17 trials enrolling 14 783 patients were
analyzed. Follow-up duration ranged from 6 weeks to 5 years. Cardiovascular death, MI, or stroke occurred
in 135 of 7472 patients (1.8%) receiving inhaled anticholinergics and 86 of 7311 patients (1.2%) receiving
control therapy (RR, 1.58 [95%confidence interval {CI}, 1.21-2.06]; P < .001,I2 = 0%). Among individual
components of the primary end point, inhaled anticholinergics significantly increased the risk of MI (RR,
1.53 [95% CI 1.05-2.23]; P = .03, I2 = 0%) and cardiovascular death (RR, 1.80 [95% CI, 1.17-2.77];
P = .008,I2 = 0%) without a statistically significant increase in the risk of stroke (RR, 1.46 [95% CI, 0.81-
2.62]; P = .20, I2 = 0%).All-cause mortality was reported in 149 of the patients treated with inhaled
anticholinergics (2.0%) and 115 of the control patients (1.6%)(RR, 1.26 [95% CI, 0.99-1.61];
P = .06,I2 = 2%). A sensitivity analysis restricted to 5 long-term trials (>6 months) confirmed the
significantly increased risk of cardiovascular death, MI, or stroke (2.9% of patients treated with
anticholinergics vs 1.8% of the control patients; RR, 1.73 [95%CI, 1.27-2.36]; P < .001, I2 = 0%).
Conclusion Inhaled anticholinergics are associated with a significantly increased risk of cardiovascular

death, MI, or stroke among patients with COPD.
INTRODUCTION
Jump to Section
Chronic obstructive pulmonary disease (COPD) is the fourth leading cause of chronic morbidity and mortality in the United States, and is projected to rank fifth in 2020 in burden of disease worldwide.1-2 Inhaled anticholinergics include the short-acting muscarinic agonist ipratropium bromide, and the M1and M3 selective long-acting muscarinic agonist tiotropium bromide.Inhaled tiotropium is the most widely prescribed agent for COPD.3 More than 8 million patients worldwide have used inhaled tiotropium since its approval in 2002,3 with net sales of 1792 million (approximately US $2.4billion) in 2007.3 According to the recent COPD Global Initiative for Lung Disease guidelines, inhaled tiotropium is indicatedfor the long-term, once daily maintenance treatment of bronchospasm associated with COPD.1 Thequaternary ammonium structure of inhaled anticholinergic agents limits their systemic bioavailability, andthe only commonly recognized adverse effects include the development of anticholinergic effects, such asdry mouth and urinary retention.1 Cardiovascular disease is an important cause of morbidity and mortality in COPD. According to the recentCOPD Global Initiative for Lung Disease guidelines: "an unexpected small increase in cardiovascular adverseevents was noted with inhaled ipratropium bromide which deserves further investigation."1, 4 A pooledanalysis of 19 short-term placebo-controlled trials revealed no significant increase in the risk ofcardiovascular adverse events with inhaled tiotropium bromide in 2006.5 However, in an earlycommunication in 2008, the US Food and Drug Administration reported that patients in the inhaledtiotropium group experienced a "possible increased risk of stroke" based on a pooled analysis of 29 trialsinvolving 13 500 patients with COPD.6 The risk of stroke was 8/1000 per year in the tiotropium groupcompared with 6/1000 per year in the placebo group.
It is important to establish the complete cardiovascular safety profile of inhaled anticholinergics in patientswith COPD due to the widespread use of these agents. Our primary objective was to systematicallyascertain the cardiovascular risks (myocardial infarction [MI], stroke,and cardiovascular death) associatedwith the long-term use of inhaled anticholinergics (ipratropium bromide and tiotropium bromide) comparedwith control therapies in patients with COPD in randomized controlled trials (RCTs).
Jump to Section
Eligibility Criteria
Our specific inclusion criteria for trials were (1) study design consisting of an RCT for any inhaled anticholinergic (ipratropium bromide or tiotropium bromide) with more than 30 days of follow-up;(2) study participants with a diagnosis of COPD of any severity; (3)an inhaled anticholinergic as the intervention drug vs a control,which could be placebo or active control (eg, inhaled β-agonists or inhaledsteroid β-agonist combinations); and (4) the trial had to report data on the incidence of seriouscardiovascular adverse events, including MI, stroke, or cardiovascular death. All RCTs that recruitedpatients with asthma were excluded.
Search Strategy
On March 19, 2008, 2 reviewers (S.S. and Y.K.L.) independently and in duplicate searched MEDLINEthrough PubMed with the clinical trial filter using the search terms ipratropium and tiotropium and chronic and obstructive with no date restrictions. In addition,trials were retrieved from the Cochrane Database ofsystematic reviews,Web sites of the US Food and Drug Administration and European regulatory authorities,clinical trials.gov, and manufacturers' product information sheets. Trial reports also were evaluated of allpublished or unpublished trials with inhaled ipratropium bromide and tiotropium bromide in the clinicaltrials register of the manufacturers.7 We searched the included and excluded trials'lists from systematicreviews and meta-analysis of inhaled anticholinergics in COPD,5, 8-12 checked for relevant data on adverseevents within these systematic reviews, searched the bibliographies of included studies, and used the Webof Science Citation Index to identify relevant cited and citing articles. Our search was limited to English-language articles and included unpublished studies.
Study Selection
Two reviewers (S.S. and Y.K.L.) independently and in duplicate scanned all titles and abstracts thatindicated whether a study was an RCT evaluating inhaled anticholinergics in patients with COPD.Afterobtaining full reports of potentially relevant trials, the same reviewers independently assessed eligibilityfrom full-text articles.Disagreements regarding eligibility were resolved with a third reviewer (C.D.F.)through consensus.
Study Characteristics
A standard protocol was used to record the following properties of each study: the dose and frequency ofthe inhaled anticholinergic and control interventions, location and duration of the study (in weeks), primaryoutcome, mean age and sex of participants, percentage of current smokers enrolled, severity of COPD inthe participants as mean predicted forced expiratory volume in the first second of expiration (FEV ), and proportion of participants with preexisting cardiac disease or cardiovascular risk factors if available.
Validity Assessment
Two reviewers (S.S. and Y.K.L.) independently and in duplicate assessed each included study for thereporting of allocation concealment,the use of blinding, loss to follow-up, and withdrawal rates. Todetermine the strength of adverse event monitoring, the frequency and type of adverse event monitoringduring the follow-up period were evaluated based on the recommendations in the Cochrane Handbook forSystematic Reviews of Interventions on assessing adverse effects.13 Outcome Measures
The primary outcome measure was prespecified as a composite of nonfatal MI, nonfatal stroke (includingtransient ischemic attack),and cardiovascular death (including sudden death). These major adversecardiovascular events represent serious ischemic events and are a widely used end point in cardiovascularoutcome trials.14 Because none of the trials were prospectively designed to assess the cardiovascular risk ofinhaled anticholinergics in patients with COPD, cardiovascular end points may not have been prospectivelydefined in a uniform fashion across the trials but were ascertained through routine serious adverse eventreporting within each trial. The risk of all-cause mortality also was determined in the included trials as asecondary outcome.
Data Extraction
Two reviewers (S.S. and Y.K.L.) independently and separately extracted data (including 0 events) on MI,stroke, cardiovascular death, and all-cause mortality among trial listings of serious adverse events; a thirdreviewer (C.D.F.) adjudicated in the event of discrepancies.Data in the clinical trials register and theregulatory documents were reconciled with that of the published journal article when possible.If there weremultiple reports for a particular study, data from the most recent version were extracted. When specificaspects of the data required clarification, the authors of the original articles were contacted.
Quantitative Data Synthesis and Sensitivity Analysis 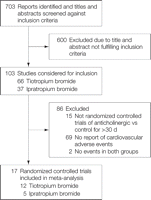 Review Manager (RevMan) version 5.04 (Nordic Cochrane Center,Copenhagen, Denmark) was used tocalculate relative risk (RR) and 95% confidence intervals (CIs) for the primary composite outcome(cardiovascular death, MI, and stroke), the individual end points of the composite,as well as all-causemortality. All reported P values are 2-sided with significance set at less than .05. Statistical heterogeneitywas assessed using the I2 statistic.15 I2 values of 50% or more indicate a substantial level of heterogeneity.
We planned to pool data across studies using the fixed-effects models if substantial statistical heterogeneitywas not present.
A predefined sensitivity analysis was performed to explore the influence on the effect size for statisticalmodels (fixed and random effects), trial duration, and completeness in reporting of individual end points ofthe primary outcome, and the influence of the individual studies. The fail-safe number, using the Rosenbergmethod,16 was calculated to evaluate the potential impact of unpublished studies on the meta-analysis. Thefail-safe number indicates the number of nonsignificant unpublished studies that would need to be added toa meta-analysis to reverse an overall statistically significant result to nonsignificance.16 The number needed to harm (NNH) (and 95% CI) with inhaled anticholinergics was calculated by applyingthe RR estimates to the cardiovascular event rate in a large population-based study using Visual Rx, version2.0.17 The NNH varies when inhaled anticholinergics are used in a general population outside highlyselected trial participants.18 The NNH is the number of patients with COPD who need to be treated withinhaled anticholinergics rather than with placebo or comparators for 1 additional patient to be harmed by acardiovascular adverse event.
Jump to Section
Of the 703 potentially relevant citations identified, 17 trials fulfilled the inclusion criteria after a detailed review of 103 studies.4, 19-34 The flow of the trial is shown in Figure 1. Trial characteristics are shown in Table 1.
• Methods• Results• Comment• Author information• References Figure 1. Study Selection
View larger version (70K):
View this table:
Table 1. Characteristics of Randomized Controlled Trials of Inhaled Anticholinergics
Included in the Analysis of Major Adverse Cardiovascular Events The trials included 14 783 participants, in which 7472received inhaled anticholinergics and 7311 received 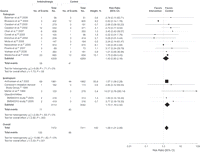 control therapy.Twelve trials evaluated inhaled tiotropium vs control therapy,19-30 and 5 trials evaluatedinhaled ipratropium vs control therapy.4, 31-34 Nine trials evaluated inhaled anticholinergics vs placebo.4, 19,21-23,26-27,29-30 The remaining trials used active comparators, including inhaled salmeterol,24-25,32-34 acombination inhaler containing salmeterol and fluticasone,20, 28 or inhaled albuterol.31 There were 5 long-term trials ranging from 48 weeks to 5 years,4, 19-22 and 12 short-term trials ranging from 6 weeks to 26weeks.23-34 The mean predicted FEV of participants was less than 50% for all trials, except 1 trial4 in which The quality assessment of included trials is shown in Table 2. Trial quality was variable.All trials weredouble-blinded. Allocation concealment was adequate in 4 RCTs,4, 20, 23, 27 and unclear in the remaining 13RCTs.19, 21-22,24-26,28-34 Information on withdrawal rates was available for all RCTs except 1 trial,28 andranged from 6.1%23 to as high as 42%.20 Reporting of loss to follow-up was variable and only available for6 RCTs4, 20, 27, 29, 31, 34 and ranged from 0%34 to 3.4%.29 View this table:
Table 2. Quality Assessment of Included Trials
Data on MI, stroke, cardiovascular death, the major adverse cardiovascular event composite, and all-causemortality are shown in Table 3.
View this table:
Table 3. Cardiovascular Events and All-Cause Mortality in Randomized Controlled
Primary Outcome
Inhaled anticholinergics significantly increased the risk of cardiovascular death, MI, or stroke (1.8% vs1.2% for control; RR,1.58 [95% CI, 1.21-2.06]; P < .001)in a meta-analysis of 17 trials involving 14 783patients (Figure 2).4, 19-34 There was no evidence of statistical heterogeneity among the included trials(I2 = 0%).
Figure 2. Meta-analysis of Randomized Controlled Trials of Inhaled
Anticholinergics vs Control for Major Adverse Cardiovascular
Outcomes Composite
Cardiovascular outcomes composite indicates cardiovasculardeath,myocardial infarction, and stroke. Size of the data markersindicates weight of the study. CI indicates confidence interval.
View larger version (50K):
Among individual components of the primary outcome, inhaled anticholinergics significantly increased the