Global Perspective – n°40
Investors are worried about the possibility of a US economic
slowdown.
The US economy is indeed slowing down, but that is GOOD news !
It is GOOD news for stocks and bonds.
1. The economy and corporate profits
If you look at the broad picture, for the last three years, the world economy has systematically
performed better than generally expected.
Admittedly, three years ago, just before the Iraq war got going, the economic picture was bleak and expectations were low. So, the sceptics would say, from such a low base, beating expectations was not Nevertheless, with the exception of the Eurozone, the world's economic performance over the last Even more important for us, corporate profitablity, the result of growth and spectacular
productivity improvements, has been nothing short of phenomenal.
If you go back and read our Global Perspectives over the last four years, this is exactly what we had been expecting and what we had based our investment strategy on.
As from last year, we have been very vocal about the, until then, disappointing Eurozone, which we The picture which is emerging today is the following: the US economy is bound to slow down, as it is facing higher interest rates, higher energy
prices, overleveraged consumers, some major imbalances (budget & trade) and as main suspect, a
the European economy is picking up nicely, as it is still basking in low interest rates, an
improving and increasingly flexible labour market, eager and underleveraged consumers, a pick-up
in capital expenditures. European companies are still increasing productivity, they are export- Emerging markets like Russia, China, India, Brazil are in much better shape than the recent
volatility might suggest. Strength in commodity prices, including oil, has led to some great
improvements in their public and private finances.
A slowing US economy and a strengthening Euro economy is EXACTLY WHAT THE DOCTOR ORDERED ! In typical contrarian style we think that as soon as signs of a slowdown in the US economy will materialize, interest rates will stabilize (possibly decline) and stockmarkets will react very positively.
www.capitalatwork.com
Den Haag Antwerpen Gent Brussels Luxembourg Geneva Madrid London 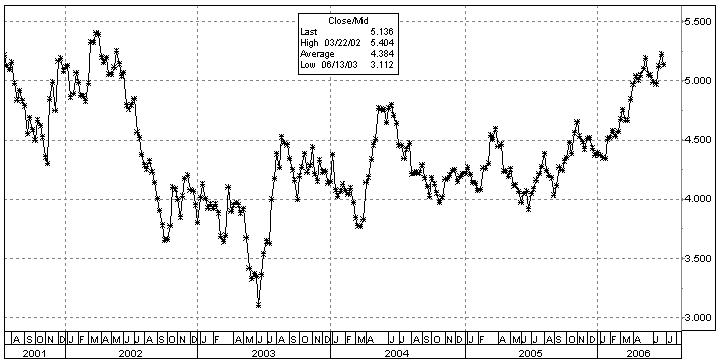 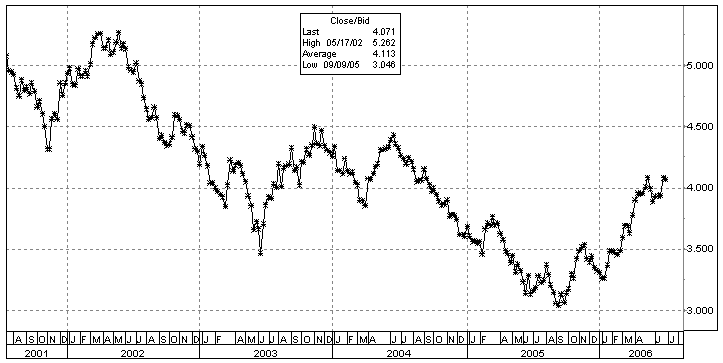 2. Inflation and Interest Rates
Again the broad picture: as you can see from the below graphs, we have been in bear market in bonds (higher rates, lower bonds) for nearly three years in the US and for one year in Europe, which is exactly what we warned against, as interest rates had reached their lowest levels since WWII. We saw not much value in bonds, except very selectively in corporates and, of course, in inflation- linked bonds as a fundamental and structural hedge against our eternal enemy: inflation.
Much has been said about the (possible, probable, certain, hidden, delayed, .) resurgence in inflation and inflation expectations. Combined with the worries about an economic slowdown, investors are said Reality is somewhat different, as you can see from the table below, inflation expectations in Europe are barely above 2,25% and around 2,75% in the US (which is obviously too high for the FED's liking).
These expectations have gone up, but by no more than 0,25% over the last six months, certainly not indicative of a renewed inflation scare.
Europe - Euro
Nominal Bond
Real Infl.-linked
Discounted
Inflation
www.capitalatwork.com
Den Haag Antwerpen Gent Brussels Luxembourg Geneva Madrid London

You will not be surprised to hear that we stick with our long-term low-inflation view of the world.
We are convinced the FED is not happy (nor should they be) with inflation expectations above 2,5%.
A US economic slowdown should bring these expectations back to the 2% levels. This is very clearly what Mr Bernanke is and should be working on ! Nor should the ECB be satisfied with expectations above 2%. They should and will continue to tighten monetary policy till expectations go back below 2%.
As such, we think the creeping bear market in bonds, has slowly but surely reintroduced value in bonds, especially in the US with long government rates at or above the 5,25% level.
Our Bonds at Work fixed-income fund currently yields 5,60% (before management fees and taxes) till an average maturity of 7 years (5,8 yrs duration).
3. Asset Valuations
“Everything we do and don't do at Capital at Work, has to do with VALUATIONS”. That, by the way, is Expected Return European Equities - Available 30yr Govt Bond Yld
= European Equity Risk Premium
Govt Bond Yld
Exp Return Equities
www.capitalatwork.com
Den Haag Antwerpen Gent Brussels Luxembourg Geneva Madrid London

This is obviously a very important illustration as it shows the basic “asset allocation” choices the blue area is the “real” return from inflation-linked bonds, currently at 2% in the Eurozone, the red area is the nominal return on classical government bonds, currently at 4% in Euro, the yellow area is the “expected” return on European equities, based on expectations ofcurrent and future earnings. Our current best estimate stands at 12%.
The above macro-data are completely in line with the valuation work we perform on individual stocks, where we see a lot of stocks which are substantially undervalued.
We see clear and present value in equities !
The continued boom in merger and acquisition activity shows we are not alone in seeing value We see little value in bonds !
We see merit (not much value either) in owning inflation-linked bonds, as a hedge against our 4. We don't invest in the economy, we invest in businesses!
The businesses we invest in for you did quite well (we are talking about their operations, not necessarily about their stockprices) since the beginning of the year.
Here is a summary of our investment cases and most recent corporate news of our biggest holdings: VINCI – 80 Euro: The share price has been supported by speculation and Veolia's attempt to merge
with this leading European construction company. After the integration of ASF, Vinci's value is mostly dependent on concession activities offering strong visibility and stable cash flows. Although predators might be attracted by this cash cow, we consider Vinci as one of the most successful business models.
Construction activities continue to be helped by a solid order book.
SCHNEIDER – 80 Euro: The French engineering group is a worldwide leader in low and medium
voltage products and automation. Thanks to a solid business model, Schneider has been able to absorb the adverse currency and raw material price volatility. Beside its rock-solid balance sheet and strong FCF generation, the group offers attractive exposure to emerging markets and new attractive E.ON – 90 Euro: E.On is a high-quality, focused energy company with leading market positions in
Europe. It is one of the cheapest in its industry, has ample nuclear provisions, relatively young nuclear assets, easy access to emerging European markets, and unmatched financial flexibility, helped by a strong and stable FCF generation. Significant upside remains from nuclear life extensions and a re- www.capitalatwork.com
Den Haag Antwerpen Gent Brussels Luxembourg Geneva Madrid London

SIEMENS – 68 Euro: The German conglomerate has been accelerating its portfolio reshuffle: after
the disposal of its mobile business, Siemens will de-consolidate its COM carrier unit through a 50-05 JV with Nokia, under very appealing terms. We now expect a final solution for the loss-making Enterprise Networks and SBS. The group is focused on core promising businesses: Medical (acquisition of Bayer COMCAST – 32 Usd: Despite increased competition, the largest US cable operator in Q1, reported the
best quarter in the company's history, increasing sales and EBITDA by 10%, and FCF by 30%. With the recent launch of their triple-play offering and their superior product offering, differentiation from competitors by adding content and value added features, Comcast is set to grow by double-digit numbers over the next few years. The strong FCF generation will be used to continue investments in content and to increase shareholder remuneration. UNITED TECHNOLOGIES – 64 Usd: This diversified, industrial company is poised to deliver mid-to-
high single digit top-line growth driven by exposure to strong aerospace markets and increasing demand for infrastructure in emerging markets. There is still room for margin expansion as the company continues to focus on reducing costs. SANOFI AVENTIS – 75 Euro: Despite the recent positive newsflow on Lovenox, Plavix and Acomplia
and the strong Q1 figures, the French pharmaceutical group still has a low valuation. On one hand, following the recent amical agreement signed with the generic drugmaker Apotex on Plavix and the new patent on Lovenox, the generic risk of those two products has been substantially reduced. On the other hand, Acomplia, a potential blockbuster, has been recently approved in Europe. The market's skepticism about the stock seems therefore unwarranted. Moreover, we believe that the FDA green light for Acomplia, which we expect in H2 2006, will provide a strong catalyst for the group. LVMH – 77 Euro: The French luxury goods company reported strong Q1 sales. All divisions performed
well and trends were positive in most regions. Following this strong start to the year, LVMH reiterated its confident message and its objective of a very significant increase in profit for FY06. We believe that the market has not yet fully valued those attractive medium term prospects, attributable to three major drivers: high exposure to Asia, strong innovation and pricing power, and leverage from LAGARDERE – 58 Euro: Over the past few years, the French media and high technology group has
done a great job in restructuring the business and in simplifying the group structure. The recent monetization of 7.5% of their 15% stake in EADS at a price of €32.6, should further lower the company's holding discount. In their core media businesses there is still ample room to improve margins, which will drive FCF growth going forward. www.capitalatwork.com
Den Haag Antwerpen Gent Brussels Luxembourg Geneva Madrid London