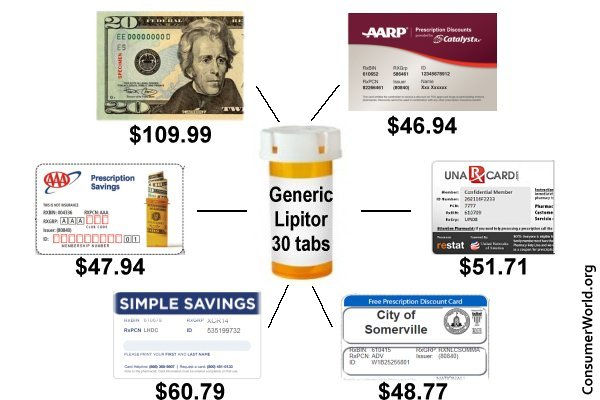 147 Shore Drive • Somerville, Massachusetts 02145 (617) 666-5958 • [email protected] DRUG DISCOUNT CARDS: A PRESCRIPTION FOR SAVINGS
But Comparing Card Discounts is a Bitter Pill
(BOSTON- JULY 23) -- Consumers without prescription drug coverage can save money using little-known drug discount cards, especially free ones, according to a price comparison survey released today by ConsumerWorld.org. Trying to figure out which card saves the most money, however, is nearly impossible. Consumer World checked the prices of four popular drugs, two brand names and two generics, using five different discount cards at CVS, Costco and one independent pharmacy, and found savings ranging from zero to 71 percent off the cash price that an uninsured individual would otherwise pay. The average savings was 16 percent. For example, the cash price for a 30-day supply of simvastatin – a generic version of Zocor, a cholesterol-lowering drug -- was $39.99 at CVS, but was only $19.02 after presenting the Simple Savings card, $33.30 with the National League of Cities card, $35.99 with the AAA card, $38.99 with AARP’s card, but was full price with the Una Rx card. By comparison, Costco’s cash price was a mere $5.90, and only the AARP card and Costco’s own free card offered a further discount of about a dollar. Since the other cards had higher prices than Costco’s, the warehouse club only charges customers the lower cash price in such circumstances. “If you don’t have prescription coverage, you would be foolish not to get one of these cards, particularly the free ones, because it is such an easy way to save money,” commented Consumer World founder Edgar Dworsky. Prescription drug discount cards are a membership benefit of certain organizations like AAA and AARP, and are also available free at various websites. Some chains also sell proprietary cards good only at their own pharmacy. These cards are not considered insurance, and can only be used
for prescriptions not covered by insurance. The sponsoring organization often gets a small fee for
each prescription filled, the money for which comes in part from the 50,000 or so drugstores
nationally that accept the cards. These cards should not be confused with retailers’ own programs
offering $4 and $10 prescriptions for certain generic drugs.
While some cards claim savings of up to 80%, Consumer World found the average savings to be far
less for the test drugs, ranging from 11% on the AAA card to 27% on the Una Rx card. Overall, free
cards offered slightly superior discounts compared to cards that cost money to obtain. No one card
always offered the best savings on all the drugs checked, and savings on individual drugs vary.
While customers can easily obtain these drug discount cards (see attached chart), determining
which card offers the most savings is nearly impossible. Consumer World approached both
individual chain pharmacy locations in person, the corporate headquarters of four major pharmacy
chains, and some card sponsors to obtain prices for the various drugs in the survey. Except for
Costco, the chains’ headquarters declined to disclose the price for each drug using each of the
discount cards. Local pharmacists at the major chains generally claimed that a price comparison
could not be done without actually placing an order.
In part, the brush-offs stem from the time-consuming and costly method by which the pharmacy has
to obtain the prices, and the fact that the discounts come out of the pharmacy’s own pocket. Each
request has to be accompanied by a real prescription and must be keyed into the same computer
system as if the customer had presented an insurance card and was actually placing an order. After
the price is shown to the pharmacist, he or she has to then cancel the order. The pharmacy is also
charged a small fee for each price look-up by its pharmacy benefits manager.
For shoppers who want to compare prices, Consumer World recommends that they obtain several
cards and use the card’s online price checking feature to get a rough idea of what a local pharmacy
would charge using each card. They should keep in mind that the bottom line price they will pay is
key, not the percentage discount.
For the price check, Consumer World obtained discount cards issued by AAA, AARP, Simple
Savings, National League of Cities (City of Somerville), and Una Rx Card, the latter three cards
being available free online. Prices were checked at CVS, Costco, and a local independent
drugstore, Theatre Pharmacy, all in Massachusetts.
Four popular drugs in common dosages were checked – simvastatin, atorvastatin (generic Lipitor),
Avodart (a prostate drug), and Cialis (for treating “ED”). In CVS’ case, the results were obtained
from different stores in different cities between July 7-9 and then merged together. Other stores’
prices were obtained between May 10 - 21. Prices change frequently and those listed here do not
represent prices at which these drugs can be purchased today nor in other cities. No single discount
card provides the biggest savings because discounts vary from drug to drug and store to store.
August update: The discount card at NeedyMeds.org seems to offer better prices than most cards.
Consumer World wishes to thank the few individual pharmacists and the one company (Costco) that
were willing to fully participate in the survey.
Consumer World®, launched in 1995, is a Boston-based, public service consumer resource guide with over
2000 links to everything "consumer" on the Internet. Edgar Dworsky, the founder and editor of
ConsumerWorld.org and MousePrint.org, is a former Assistant Attorney General in the Consumer Protection
and Anti-trust Division of the Massachusetts Attorney General's Office.
Release online at: http://www.consumerworld.org/pubs/prescriptiondrugcardsprs.pdf [See attached charts]
Average Savings** Using Discount Cards
Costco* Independent
* Costco's everyday cash prices were often lower than card prices, so extra savings are minimal. ** Savings based on four drugs, two generic and two brand name. Savings on others will vary. Sample Prices for Avodart (30 tab) Using Discount Cards
Costco Independent
CVS Senior Discount or Costco’s Free Card Note: CVS prices in MA July 7-9; others May 10-21. Prices may vary elsewhere and currently. Prescription Drug Discount Card Finder

Tissue Engineering : Future of Pediatric EndodonticsDr. George Kurian Panampally, MDS*, Dr. Vivek M. Patil, MDS**,Dr. Rehan Khan, MDS***,During the last 10–15 years, there has been a tremendous increase in our clinical “tools” (i.e. materials,instruments and medications) and knowledge from the trauma and tissue engineering fields that can beapplied to regeneration of a functional pulp-de

Position Statement of the National Lymphedema Network TOPIC: The Diagnosis And Treatment Of Lymphedema Introduction Lymphedema is caused by an abnormality of the lymphatic system leading to excessive build up of tissue fluid that forms lymph, known as interstitial fluid. Stagnant lymph fluid contains protein and cell debris that causes swelling of affected tissues. Lymph is responsible for