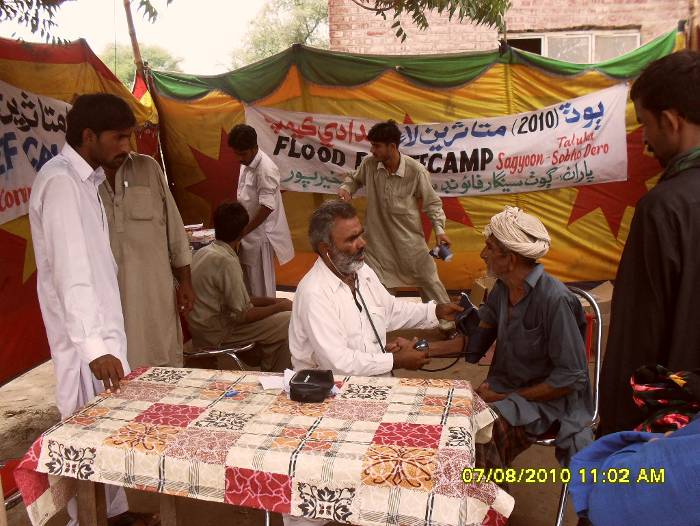 This relief camp has been organized at village Ripri . One ambulance has been provided
by GSF that was in need in the area because there are plenty of cases i.e. Snake biting,
Cholera, Gastro, Intensive high fever, Allergies, Rashes and many more. This ambulance
brings the patients to the hospitals or big camp organized by the government, where the
patients treated well.

1. Nadeem Ujjan 0334-2721164 2. Nasser Ahmed 0300-3124990 3. Muhammad Baksh 4. Lutaf-ulluah 5. Hafizullah 6. Hyat Muhammad Soomro 7. Shoukat Ali 8. Ahsan Sheikh The team has reported that people are migrating from river area the detail of villages is as under 1. Jalal Mangnejo 2. Qadir Bux Sheikh 3. Miran Bux Narejo 4. Kharil Abad 5. Mithal Jagerani 6. Gullo Sial 7. Shafi Muhammad Shahani 8. Muhammad Bux Shabani 9. Bahno 10. Jogi Shabani 11. Umar Panhwar 12. Lal Kumbahr 13. Qazi Panhwar 14. Pyarial Kalhoro 15. Jamaldin Jhangan 16. Allah Warayo Shabani 17. Shafi Muhammad Shabani 18. Khando Narajo 19. Gulan Narejo 20. Jaro Narejo 21. Ismail Kurio
3. Relief Camp Khairpur city.
This camp is organized for collecting donation from the people. GSF is playing the main
role and other civil society organizations are working under the umbrella of GSF for
collecting donation to give relief at the needy place. From here we are collecting
donations, gathering volunteers, medicines and other related stuff. GSF is in contact with
the EDO (CDD) and in the end of the day a meeting held where need assessment is
considered and then decisions made that where this donation could be best utilize. We
had installed 2 hand pumps at Girls High School, Baberlo; where about 2500 people are
getting relief and shelter. There was a need of water and having many people in the
school it was difficult to render safe drinking water on large scale. Therefore, to fulfill the
need of water hand pumps were installed to meet the need. Crockery is also providing at
the relief camps by GSF and other Civil Society Organization from the collected donation
and food is providing by the government in the camps.
List of Volunteers in Khairpur camp.

This cell is organized to get the information from the departments of government, other
sources and from the areas where GSF is working i.e. Kashmore, Jacobabad, Khairpur
and Sukkur. This cell is collecting the most update information from all the areas and
then disseminate in the related departments of government and other stakeholders.
Through this all the information is sharing and it is acting like the grid of communication
and data collection. The team is as below

Remarks by Stephen Lewis, UN Special Envoy for HIV/AIDS in Africa, to the Closing Session of the XVI International AIDS Conference, Toronto, Canada This is the last speech I shall make at any of these international conferences in my role as United Nations Envoy. I’m glad, for obvious Canadian reasons, that it comes in Toronto. But I’m equally pleased because this has been a good conf

Midlife - The Free Theatre "Stefan" has a bit much at home and at work. Manager "Eve" is trying to get him to work even more. The Free Theatre wants, with their performance Midlife, to get people to discuss important issues. In the middle of the murmur a voice is heard:  - Someone forgot a book here: Black belt in everyday effectiveness! She who asks is Susanne Olofsson,