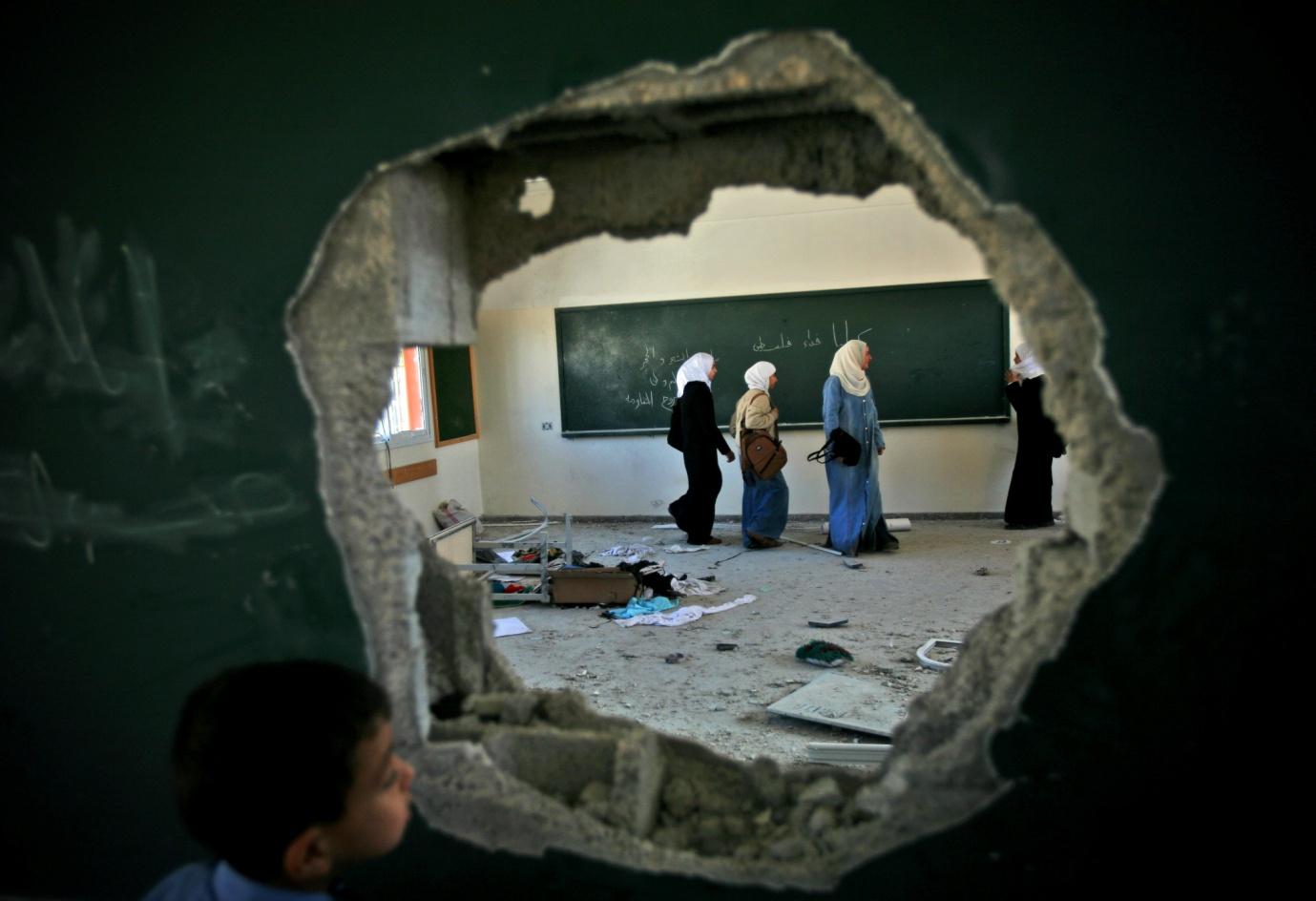 Operation Cast Lead: Two sisters killed during air strike nearby school
On 27 December 2008 Israeli F16 aircrafts bombed the preventive security building in
Tal al-Hawa, Gaza City. The time of the strike corresponded to the mid-day change in
school-shifts and many children from the nearby Balqis al-Yaman school were on the
street at the time. Two sisters, Hanin (15) and Yasmin (16) were coming back from
school after an exam and died in the incident.

The information below is based on information collected by DCI-Palestine from the brother
of the victims, Aziz (19), on 7 February 2009:
At around 11:20am on 27 December 2008, members of the Dhaban family were sitting at
home, in Tel al-Hawa in the western part of Gaza city, when F16 aircraft bombed the
government security building located 250 metres east. Two sisters, Hanin (15) and Yasmin
(16), were taking an exam in Balqis al-Yaman school located behind the government security
building. They were expected home after their exam, between 11:00-11:30am. When the
family heard the explosions, Aziz (19), their brother, went to look for them:

Once I opened the door, I looked east at the street and was shocked to see how thick the
smoke was, and how huge the rubble was. Smoke and rubble were everywhere. I started to
run. Almost everyone was standing in the street. Shouting was heard everywhere. The sound
of ambulances grew bigger and bigger. [.] I saw a large number of schoolchildren in their
school uniforms running hysterically. Blood covered the faces of some children.[.] I walked
for about 15 metres and saw two paramedics carrying a girl. They were about five metres
away from me. I looked at them carefully. The girl was wearing a red blouse on top of her
school uniform, which was torn off. She was wearing a beige cap, black trousers and white
shoes. I rushed towards them because I knew she was my sister. I recognised her by the cap
which I had bought for her as a present. [.] It was Hanin. There many wounds in her nose. Blood was coming out from the back of her head. There were many holes in her red blouse. I carried the stretchers with the two paramedics and we ran towards al-Quds hospital, about 10 metres away. At the hospital gate, a medical team took Hanin. I left her there and went looking for my other sister Yasmin. I left Hanin in the hospital at around 11:30am. I knew she was dead, but I refused to believe it. Aziz left the hospital to look for Yasmin but could not “She shouted and burst into find her on the street or at the school, in al-Quds hospital, or at home. Going back to Al-Quds hospital, he heard from one of the paramedics that some victims had been taken to Shifa hospital. He headed there: At the gate of the morgue, I saw something I would never forget in my entire life. More than 300 bodies were on the paved ground of the yard. The hands of
some of these bodies were cut off. Heads cut off. Some of the bodies were covered in blood
and could barely be recognised. Hundreds of people were checking the bodies and looking
for a relative. I decided to enter the room. I entered the room with difficulty because of the
crowd at the door. There was a piece of paper hanging on the door of one of the cold
chambers. “A dead girl,” the paper said. I felt it was my sister. I tried to open the chamber
but a police officer stopped me. “It’s my sister,” I shouted at him. He stepped aside and I
opened the chamber. And it was Yasmin, wearing a green blouse and beige cap, with her
right jaw deviated to the left. Several holes filled her chest. Blood came out of her body. Her
clothes were torn off. I could not pull myself together. I rushed out of the room.
The sisters’ bodies were then brought home: I did not want to see my mother at this time. She
could not pull herself together. She did not know what to say. She looked at me. She was
traumatized. She shouted and burst into tears like any other mother saying goodbye to her
two dead daughters.[.] I did not know how to inform my father who was in Egypt. [.] It was
difficult for us to tell my father about the death of his two daughters whom he loved very
much. He used to call them every day and laugh with them, but today we had to tell him that
they had died. It was difficult
The sisters were buried the same day at around 2:30pm, without their father who was in
Egypt and not able to cross Rafah until 11:30pm. The next day, the Council of Ministers was
bombed nearby, and the mourning ceremony had to move inside the house.
At least 12 children were killed in the attack; many others were maimed or wounded:

During Operation Cast Lead, many children were killed as a result of Israeli military attacks targeting schools or alleged military objectives located in close proximity to schools. So far, DCI-Palestine has documented the killing of 32 children and maiming of at least six.