Irritable Bowel Syndrome
Irritable bowel syndrome (IBS) is a common gut disorder. The cause is not known. Symptoms can be quite variable and include abdominal pain, bloating, and sometimes bouts of diarrhoea and/or constipation. Symptoms tend to come and go. There is no cure for IBS, but symptoms can often be eased with treatment.
What is irritable bowel syndrome and who gets it?
Irritable bowel syndrome (IBS) is a common functional disorder of the gut. (The gut includes the bowels.) A functional disorder means there is a problem with the function of a part of the body, but there is no abnormality in the structure. So, in IBS, the function of the gut is upset, but all parts of the gut look normal, even when looked at under a microscope. IBS causes various symptoms (listed below). Up to 1 in 5 people in the UK develops IBS at some stage in their life. IBS can affect anyone at any age, but it commonly first develops in young adults and teenagers. IBS is twice as common in women as in men.
What are the symptoms of irritable bowel syndrome?
 Pain and discomfort may occur in different parts of the abdomen. Pain usually
comes and goes. The length of each bout of pain can vary greatly. The pain often eases when you pass stools (motions or faeces) or wind. Many people with IBS describe the pain as a spasm or colic. The severity of the pain can vary from mild to severe, both from person to person, and from time to time in the same person.  Bloating and swelling of your abdomen may develop from time to time. You may
 Stools (sometimes called motions or faeces):
 Some people have bouts of diarrhoea, and some have bouts of constipation.  Some people have bouts of diarrhoea that alternate with bouts of constipation.  Sometimes the stools become small and pellet-like. Sometimes the stools become watery or ribbony. At times, mucus may be mixed with the stools.  You may have a feeling of not emptying your rectum after going to the toilet.  Some people have urgency, which means you have to get to the toilet quickly. A morning rush is common. That is, you feel an urgent need to go to the toilet several times shortly after getting up. This is often during and after breakfast.
 Other symptoms sometimes occur and include: nausea (feeling sick), headache,
belching, poor appetite, tiredness, backache, muscle pains, feeling quickly full after eating, heartburn, and bladder symptoms (an associated irritable bladder).
Some people have occasional mild symptoms. Others have unpleasant symptoms for long periods. Many people fall somewhere in between, with flare-ups of symptoms from time to time. Some doctors group people with IBS into one of three categories:  Those with abdominal pain or discomfort, and the other symptoms are mainly  Those with abdominal pain or discomfort, and the other symptoms are mainly urgency to get to the toilet, and diarrhoea.  Those who alternate between constipation and diarrhoea.
However, in practice, many people will not fall neatly into any one category, and considerable overlap occurs.
Note: passing blood is not a symptom of IBS. You should tell a doctor if you pass blood. 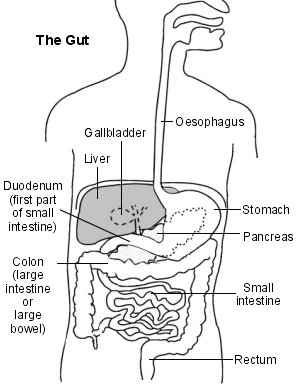