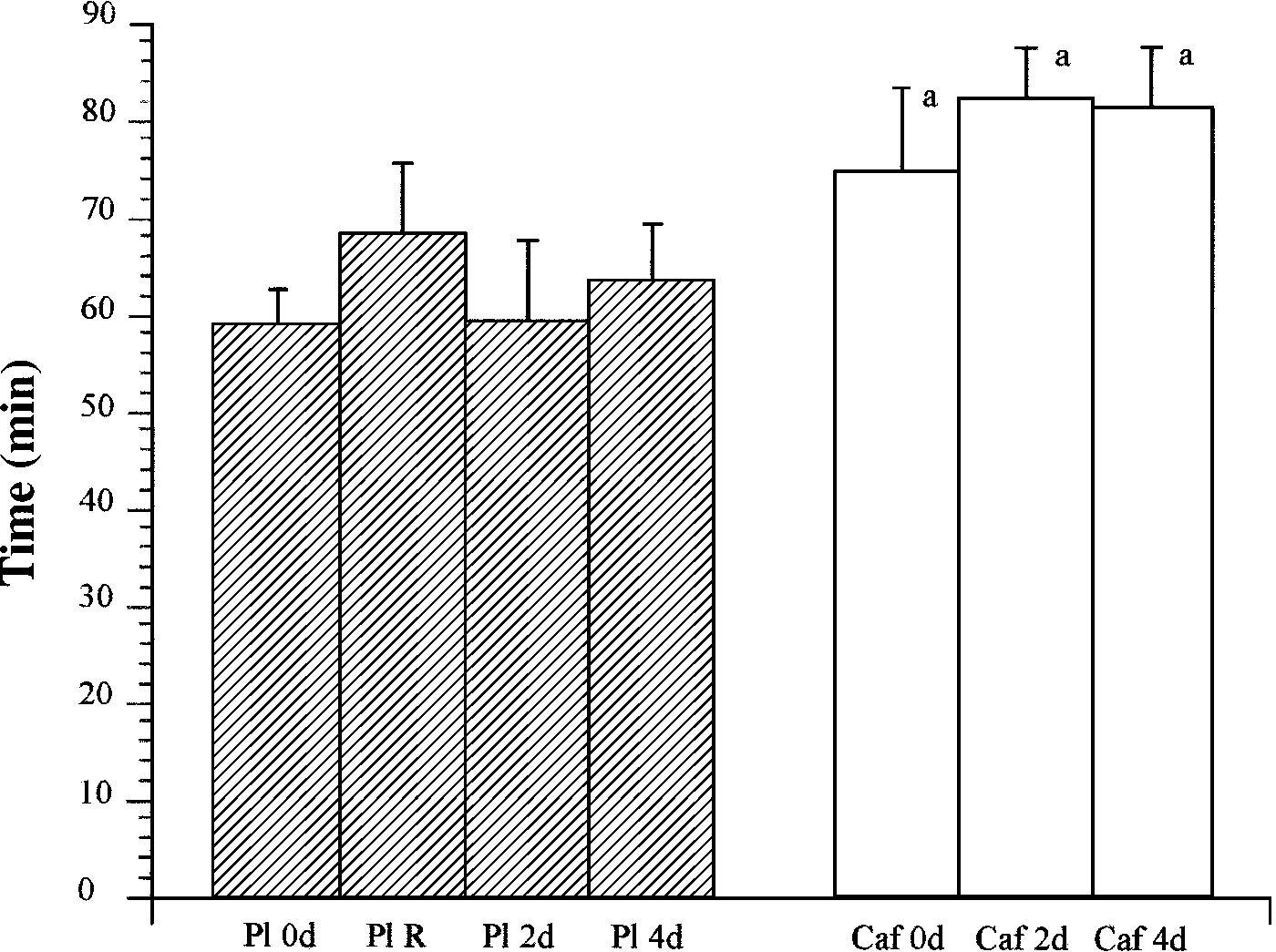 CAFFEINE, WITHDRAWAL, AND EXERCISE METABOLISM FFAs (26) and glycerol (16). Plasma insulin was analyzed by 6.7 vs. 59.5 Ϯ 8.4 min), and the 4-day withdrawal using 125I radioimmunoassay kit (Diagnostic Products Code-a- (81.5 Ϯ 6.4 vs. 63.6 Ϯ 5.6 min). In contrast to the Pl 0d Count Insulin kit). Diet analysis was completed as described trial, the time to exhaustion in the Pl R trial was not significantly different than in the Caf 0d trial. This increase in time for the Pl R trial is heavily influencedby a single subject whose time increased from 70 to 124 Statistical analysis of respiratory, exercise, and blood data min (Pl 0d vs. Pl R, respectively). When this subject’s was conducted by using repeated-measures analysis of vari- data are removed from the analyses, the Pl R and Caf ance for drug and withdrawal. Bonferroni corrected t-tests 0d trials are significantly different, because all other were used to adjust ␣ levels to limit the possibility of a type I subjects performed similarly in both Pl trials.
error. A one-way analysis of variance was used to test thedifference between Pl 0d and Pl R data as well as Caf 0d and Pl R data. Experimental significance is described as P Ͻ 0.05,and all data are reported as means Ϯ SE. Because of the small Ingestion of caffeine resulted in a significant increase number of subjects, observed power calculations were com- in plasma epinephrine concentration in all trials at pleted and were found to be ϳ0.500 for all nonsignificant exhaustion compared with that of placebo regardless of the days of withdrawal (F ϭ 11.090, P ϭ 0.007; Fig. 2).
There was an effect of withdrawal on NE responses tocaffeine. Caffeine ingestion resulted in significantly There was no significant difference between the Pl 0d elevated plasma NE concentrations over the placebo and the Pl R trials in any of the measured parameters.
conditions at exhaustion in the 2- and 4-day with- Although the original purpose of the Pl R trial was for drawal trials, but NE levels were similar to placebo in use as a comparison with the Pl 0d trial, statistical the no-withdrawal trial (F ϭ 8.793, P ϭ 0.006; Fig. 3).
comparison of the Pl R and Caf 0d data was completed.
These data followed a similar pattern of significance as did the Pl 0d vs. Caf 0d data, with the exception of thetime data. Therefore, the Pl R data will be shown only Insulin concentration declined with exercise, and with respect to time to exhaustion (Fig. 1).
there were no significant differences in any of the trialsafter ingestion of caffeine (data not shown). Initial values for the no-withdrawal trials were 9.0 Ϯ 3.0 and10.6 Ϯ 3.6 µU/ml at Ϫ60 min, which decreased to 2.7 Ϯ Time to exhaustion was significantly increased over 0.4 and 5.5 Ϯ 2.4 µU/ml at exhaustion, for placebo and placebo in all caffeine trials regardless of the period of withdrawal (Fig. 1). Ingestion of caffeine significantlyincreased the time to exhaustion in all subjects after no withdrawal (74.8 Ϯ 8.8 vs. 59.0 Ϯ 3.7 min for caffeinevs. placebo, respectively), the 2-day withdrawal (81.1 Ϯ FFAs. There is a significant effect of caffeine inges- tion on FFA concentrations (F ϭ 25.100, P ϭ 0.004).
This significant increase occurred in the 4-day trialafter caffeine ingestion when FFA concentration in-creased at rest from 0.22 Ϯ 0.04 mM (Ϫ60 min) beforecaffeine ingestion to 0.45 Ϯ 0.12 mM (0 min) comparedwith the Pl 4d data. At no other time or treatment wereFFA concentrations significantly altered by caffeine orwithdrawal (Table 1).
Glycerol. Regardless of whether the treatment was placebo or caffeine, serum glycerol concentration in-creased gradually during the initial exercise period andwas elevated at exhaustion in all trials (F ϭ 46.219, P ϭ0.0001) (Table 1). After the 4-day withdrawal fromcaffeine ingestion, there was an increase in glycerolconcentration compared with that in the placebo trial,but this was not significant.
Glucose. Blood glucose concentration was not altered by either days of withdrawal or caffeine ingestion(Table 2). A low initial glucose concentration at Ϫ60min in the Caf 0d trial was demonstrated in four of the Fig. 1. Time to exhaustion in all exercise trials. Trials are groupedaccording to drug treatment [placebo (Pl) vs. caffeine (Caf; 6 mg/kg six subjects despite their reported similar diet and body wt)] and days of withdrawal [no withdrawal (0 days; 0d) or 2-day activity pattern before experimentation.
(2d) or 4-day withdrawal (4d)]. Pl 0d, initial-placebo, no-withdrawal Lactate. Blood lactate increased in response to exer- exercise trial; Pl R, placebo-repeat, no-withdrawal exercise trial, cise in all trials (Fig. 4). After the 2 days of withdrawal, which was performed on completion of all other withdrawal periods.
acute ingestion of caffeine resulted in a tendency Bars are mean data, and vertical lines indicate SE. a Significantdifference from Pl 0d, P Ͻ 0.05.
toward an increase in lactate concentration at exhaus-

CAFFEINE, WITHDRAWAL, AND EXERCISE METABOLISM amounts of residual caffeine may be detected in plasma.
When there was no withdrawal, the initial mean plasmacaffeine concentration was 7.11 Ϯ 2.26 (caffeine) and10.99 Ϯ 3.09 (placebo) µM. In the Pl 0d trial, thecaffeine concentration was significantly higher than inother placebo trials. Despite the higher initial value inthe Caf 0d trial, there was no significant difference inmaximal concentrations measured in the caffeine tri-als.
Expired gases. There was no significant difference found in any of the measured parameters of oxygen Plasma epinephrine concentration during exercise under conditions of no withdrawal (A) and 2-day (B) and 4-day withdrawal(C) from dietary caffeine. Lines are mean data, and vertical bars areSE; n ϭ 6 subjects. Time indicates sampling time: Ϫ60, preingestion;0, 1 h of rest postingestion at start of exercise; 5 and 20, timefrom start of exercise; exhaustion (exh), end of exercise when subjectcould no longer maintain a power output of 85% maximum oxygenuptake. j, Placebo; s, caffeine. * Significant difference from placebo,P Ͻ 0.05.
tion compared with that at Pl 2d, and after the 4-daywithdrawal this trend increased to include increases atboth 20 min and exhaustion. However, this was notstatistically significant.
Fig. 3. Plasma norepinephrine concentrations during exercise under Plasma caffeine. Mean plasma caffeine data are conditions of no withdrawal (A) and 2-day (B) and 4-day withdrawalfrom dietary caffeine (C). Lines are mean data, and vertical bars are presented in Table 3. These data indicate that, after a SE; n ϭ 6 subjects. j, Placebo; s, caffeine. Organization is as in period of even up to 4 days of withdrawal, trace Fig. 2. * Significant difference from placebo, P Ͻ 0.05. 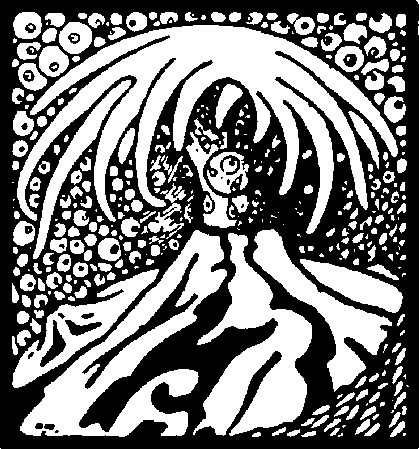