Name: _______________________________________________ Chapters 18, 20, 21 -- Microbiology / Biotech / Development (20 pts.)
MULTIPLE CHOICE. Choose the one alternative that best completes the statement or answers the question.
1) Cells become specialized in structure and function during the process of 2) HIV is particularly difficult to treat because the virus: C) injects complex proteins into host cells E) forms prophages, which mutate frequently 3) The function of reverse transcriptase in retroviruses is to A) use viral RNA as a template for making complementary RNA strands.
B) use viral RNA as a template for DNA synthesis.
C) convert host cell DNA into viral DNA.
D) translate viral RNA into proteins.
4) A cell that remains flexible in its developmental possibilities is said to be 5) What is the most common source of genetic diversity in a bacterial colony? 6) RNA viruses appear to have higher rates of mutation because A) RNA viruses respond more to mutagens.
C) RNA viruses can incorporate a variety of nonstandard bases.
D) the enzyme that makes DNA from RNA does not proofread the way DNA polymerase does.
E) RNA nucleotides are more unstable than DNA nucleotides.
7) Which technique chops large segments of DNA into smaller ones through the use of enzymes? 8) It is theoretically possible for a gene from any organism to function in any other organism. Why is A) All organisms are made up of cells.
D) All organisms have similar nuclei.
E) All organisms have the same genetic code.
9) The polymerase chain reaction is important because it allows us to B) insert eukaryotic genes into prokaryotic plasmids.
C) insert regulatory sequences into eukaryotic genes.
A bacterial plasmid carries two genes which make it resistant to ampicillin and tetracycline, both antibiotics. The plasmid is added tobacteria growing in a nutrient broth. The bacteria grow overnight. Samples of these colonies are then grown in four different media:nutrient broth plus ampicillin, nutrient broth plus tetracycline, nutrient broth plus both antibiotics, and plain nutrient broth. 10) The bacteria containing the engineered plasmid would grow in B) the ampicillin and the nutrient broth.
C) the nutrient broth, the ampicillin broth, and the tetracycline broth.
D) the ampicillin and tetracycline broth only. 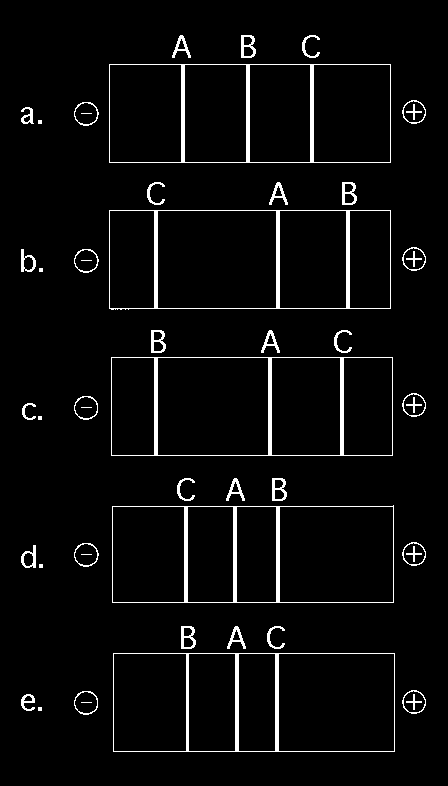 11) Bacteria that did not take up any plasmids would grow on which media? A) the nutrient broth and the ampicillin broth only B) the nutrient broth and the tetracycline broth only D) the tetracycline and ampicillin broth only 12) The segment of DNA shown in Figure 20.1 has restriction sites I and II, which create restriction fragments A, B, and C. Which of the gels produced by electrophoresis andshown in Figure 20.2 below would represent the separation and identity of thesefragments? VOCABULARY. Define each term or phrase in the space provided or on a separate sheet of paper.
17) What are the following biotechnology techniques used for: PCR, gel electrophoresis, Southern blotting, and 18) Name and briefly describe four processes by which genetic variation may arise in bacteria. (2 pts.)