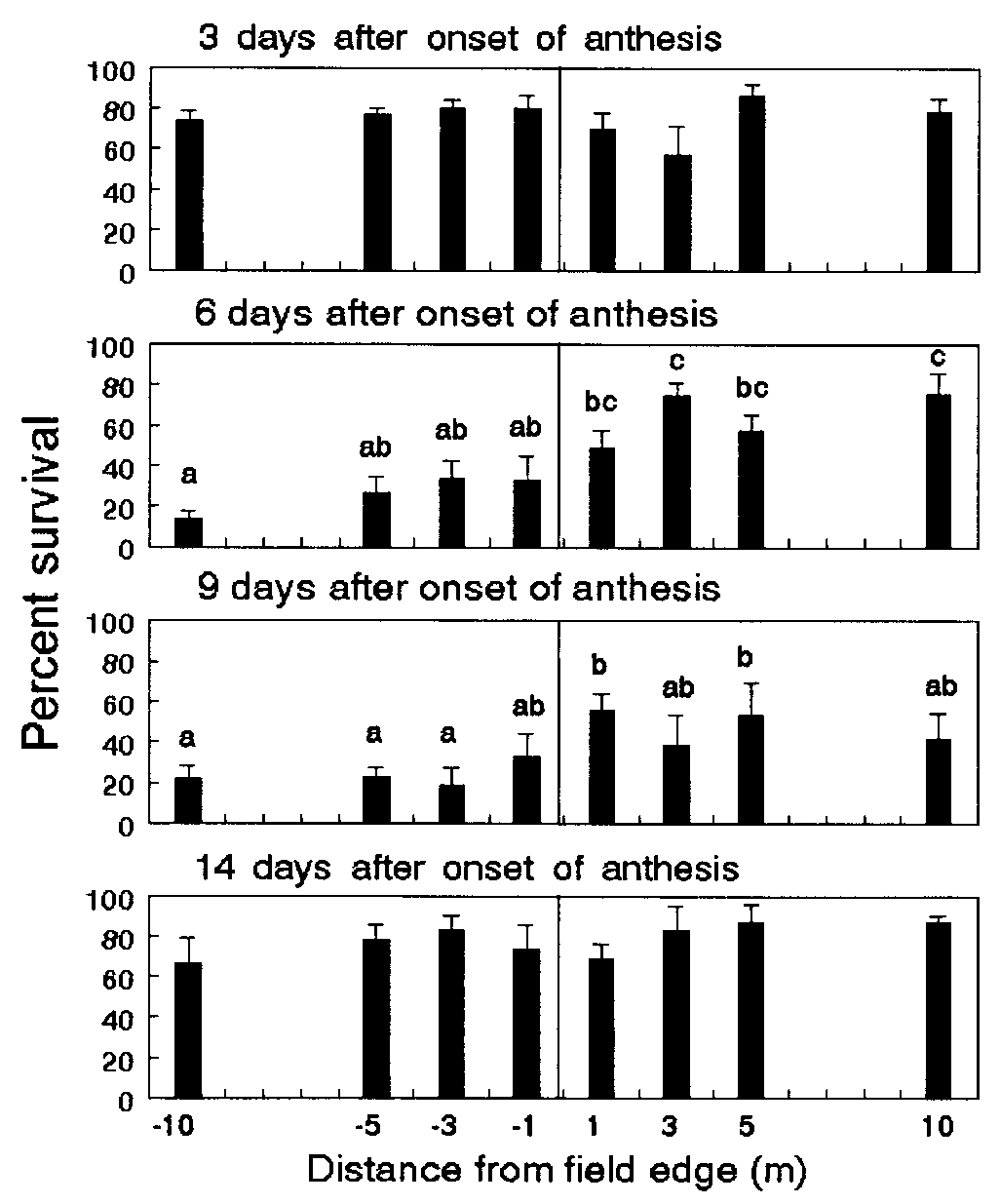 Table 1. Comparison of survivorship and growth for Monarch larvae exposed as first or third instars to Bt11 and non-Bt pollen on
caged milkweed (A. syriaca) plants in Ontario
*Day 5 avg instar͞day 0 avg instar.
†Day 6 avg wt͞day 0 avg wt.
‡Days to pupation from the beginning of the exposure period.
per cm2) compared with the plot edge (18 grains per cm2). For anthesis were 8.2, 63.7, 161.2, and 27.8 grains per cm2, respec- caged tests, average weights ranged from 2.8 to 3.3 mg per larva, tively. Average levels outside the field peaked at 18.5 grains per and all main and interaction effects were nonsignificant. For the cm2 on day 9 and significantly dropped off along positions uncaged tests, no significant effects also were indicated by using extending away from the field edge. The relative differences in the general linear model; however, the contrast test showed that pollen deposition across transect positions on each date were the average weights of larvae (1.7 mg) that fed on leaves with not the same (P ϭ 0.0015). During anthesis, seven rain events event-176 pollen were significantly less than weights of larvae (11–25 mm per day) occurred that may have washed pollen off (2.0 mg) on the other Bt hybrids combined (P ϭ 0.037). For percent survival, the hybrid treatment and all interaction effects Survival of monarch larvae ranged from 57.5 to 86.3% on day with hybrid were not statistically significant. However, both the 3 of anthesis (Fig. 1). Survivors, which initially weighed an plant location (P ϭ 0.002) and bioassay-type (caged or uncaged; P Ͻ 0.001) effects were significant. Survival was significantly higher at the plot edge (53.6%) and in caged cohorts (61.2%), compared with the middle of the plot (38.1%) and uncaged cohorts (30.5%), respectively. Predatory insects may have used the plots as a refuge to escape the prevailing hot-dry conditions in Iowa, resulting in higher predation in the middle of the field compared with the soy buffers surrounding the field. Also, lower predation seemed to occur in caged cohorts.
Ontario Study. Pollen densities on leaves did not differ between hybrid types (Bt or non-Bt) but decreased significantly with increasing distance from the field on day 6 (P Ͻ 0.0001) and day 11 (P Ͻ 0.0001) of anthesis. On day 6, the ranges of pollen densities at each distance were 2–309, 0–176, and 0–75 grains per cm2 for plants found at Ϫ1 m within the field, Ͻ1 m outside the field, and 5 m outside the field, respectively. On day 11, the range of densities calculated on leaf samples taken from Ϫ1, Ͻ1, and 5 m were 3–429, Ͻ1–320, and Ͻ1–50, respectively. Control plants contained Ϸ1 grain per cm2 on both days, probably resulting from contamination during leaf sampling. Average accumulated rainfall during the first 6 and 11 days of pollen shed (before placing cages on plants) was Ϸ10 and 13 mm, respectively, and may have washed pollen off of the plants (12).
The comparison of responses to Bt and non-Bt pollen is presented in Table 1. Neither hybrid type nor plant position affected survivorship, developmental rate, or weight gain of first- or third-instar monarchs during the exposure period in the field or in later developmental stages (but see % emergence for first instars in Table 1). No significant differences in survivorship, weight gain, or development to adulthood were observed be- tween larvae in cages within the fields and those in control cagesϾ150 m from any cornfield in either bioassay (P Ն 0.15 for all Survival of first-instar monarch larvae feeding on milkweeds placed at 1, 3, 5, and 10 m inside (negative values) and outside the field edge ofevent-176 field corn in Maryland. Means Ϯ SE are based on separate bioassays Maryland Study. Field-corn experiment. The average pollen den- conducted on days 3, 6, 9, and 14 of anthesis. Within each graph, columns with sities on milkweed leaves in the field on days 3, 6, 9, and 14 of the same letters are not significantly different (P Ͻ 0.05; Tukey’s test).
PNAS ͉ October 9, 2001 ͉ vol. 98 ͉ no. 21 ͉ 11933 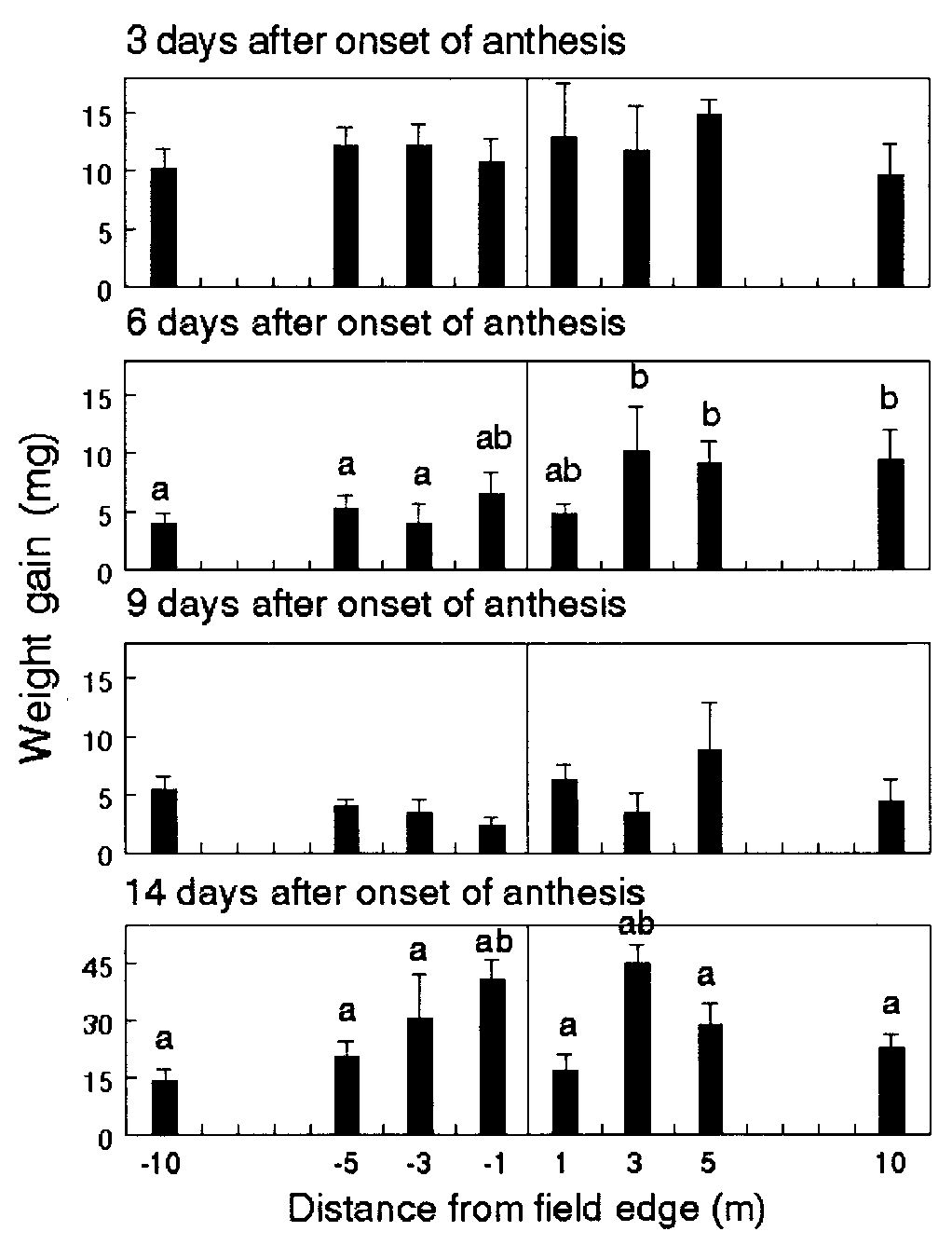 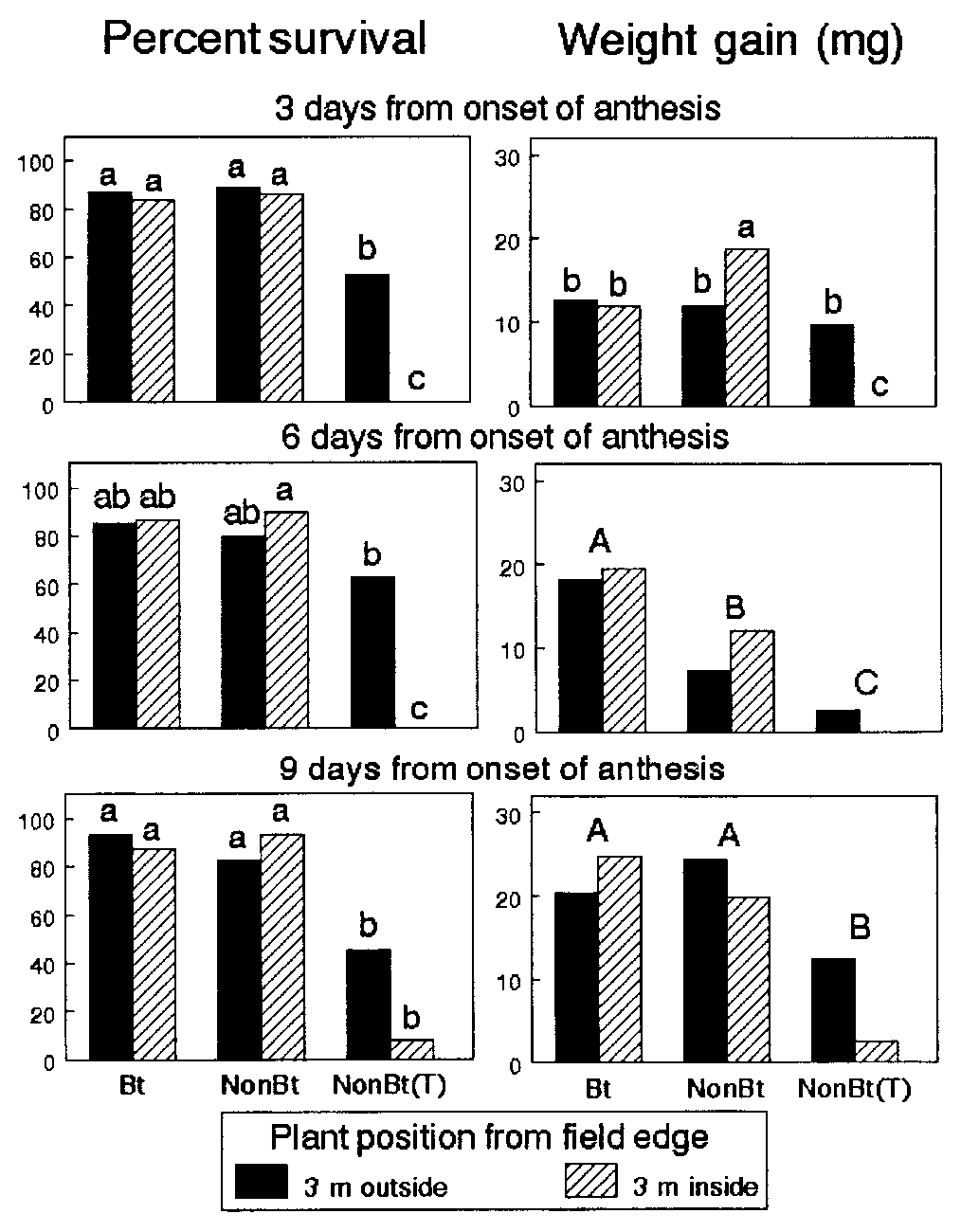 Survival and weight gain of first-instar monarch larvae feeding on Weight gain of first-instar monarch larvae feeding on milkweeds milkweeds placed at 3 m inside and outside the edge of plots consisting of placed at 1, 3, 5, and 10 m inside (negative value) and outside the field edge Bt11, non-Bt (untreated), and non-Bt (␭-cyhalothrin-treated) sweet corn in of event-176 field corn in Maryland. Means Ϯ SE are based on separate Maryland. Data are based on separate bioassays conducted at 3, 6, and 9 days bioassays conducted on days 3, 6, 9, and 14 of anthesis. Within each graph, of anthesis. Within each graph, columns with the same lowercase letters are columns with the same letters are not significantly different (P Ͻ 0.05; Tukey’s not significantly different for the interaction effect; pairs of columns with the same uppercase letters are not significantly different for the treatment effect(P Ͻ 0.05; Tukey’s test).
average of 0.9 mg, gained 9.9 to 12.8 mg after 4 days (Fig. 2). On day 6, the plant position had a significant effect on larval survival rately for each bioassay date and are summarized in Fig. 3. On (P Ͻ 0.0001) and weight gain (P ϭ 0.0081). Sixty-three percent all dates, the treatment by position-interaction effect on per- of the larvae survived and gained 8.3 mg each after feeding on centage of survival was significant (day 3, P Ͻ 0.0001; day 6, P Ͻ leaves outside the field, compared with 25.1% survival and 0.0001; day 9, P ϭ 0.0027). Survival of monarch larvae feeding weight gains of 4.8 mg inside. On day 9, larval survival inside the on milkweed leaves either inside or outside Bt and non-Bt field was reduced by 51% compared with survival of milkweeds (unsprayed) plots ranged from 79.9 to 93.2% and were not located outside (P ϭ 0.0215). Larvae also gained less weight statistically different at any date. Survival of larvae feeding on inside the field, but differences across plant positions were not leaves collected inside and outside non-Bt (sprayed) plots was significant. On day 14, weight gain, but not survival, was signif- significantly reduced by 91–100% and 21–45%, respectively.
icantly affected by plant position (P ϭ 0.0418); however, differ- Most larvae died within 1 h of exposure to sprayed leaves. Initial ences across plant positions were not consistent with levels of weights during days 3, 6, and 9 averaged 2.2, 2.2, and 3.5 mg per pollen. This last bioassay used a combination of late-first and larva, respectively. On day 3, the weight gain of surviving larvae early-second instars with an initial weight of 5.6 mg per larva and was significantly influenced by the treatment by position inter- leaves from only four transects of plants. Thus, weight gains were action (P ϭ 0.0003). Larvae fed milkweed leaves collected from significantly higher compared with previous bioassays and ex- inside unsprayed non-Bt plots exhibited the greatest weight gain, whereas those larvae exposed to ␭-cyhalothrin on leaves inside Sweet-corn experiment. Maximum levels of pollen from both Bt sprayed plots did not survive and, thus, showed no weight gain.
and non-Bt hybrids were deposited on milkweeds at 6 to 9 days For bioassays conducted on days 6 and 9 of anthesis, the after the onset of anthesis. Peak levels of pollen on milkweeds treatment by position interaction and main effect for position situated 3 m inside plots averaged 504–586 grains per cm2 and were not significant. On day 6, only the treatment effect was were significantly higher than levels on plants outside plots that significant (P ϭ 0.0045); average weight gains of larvae feeding peaked at 18–22 grains per cm2 (P Ͻ 0.0001). The overall level on milkweeds from Bt plots were significantly higher than those of pollen produced by both hybrids over time was statistically the of larvae feeding on plants from non-Bt plots. The insecticide same. Rain events, recorded on day 5 (2 mm) and day 9 (36 mm) significantly reduced the weight gains of surviving larvae feeding of anthesis, may have removed some pollen.
on plants from both inside and outside the sprayed non-Bt plots.
Data on larval survival and weight gain were analyzed sepa- On day 9, overall weight gains of larvae after 4 days of feeding 11934 ͉ www.pnas.org͞cgi͞doi͞10.1073͞pnas.211277798 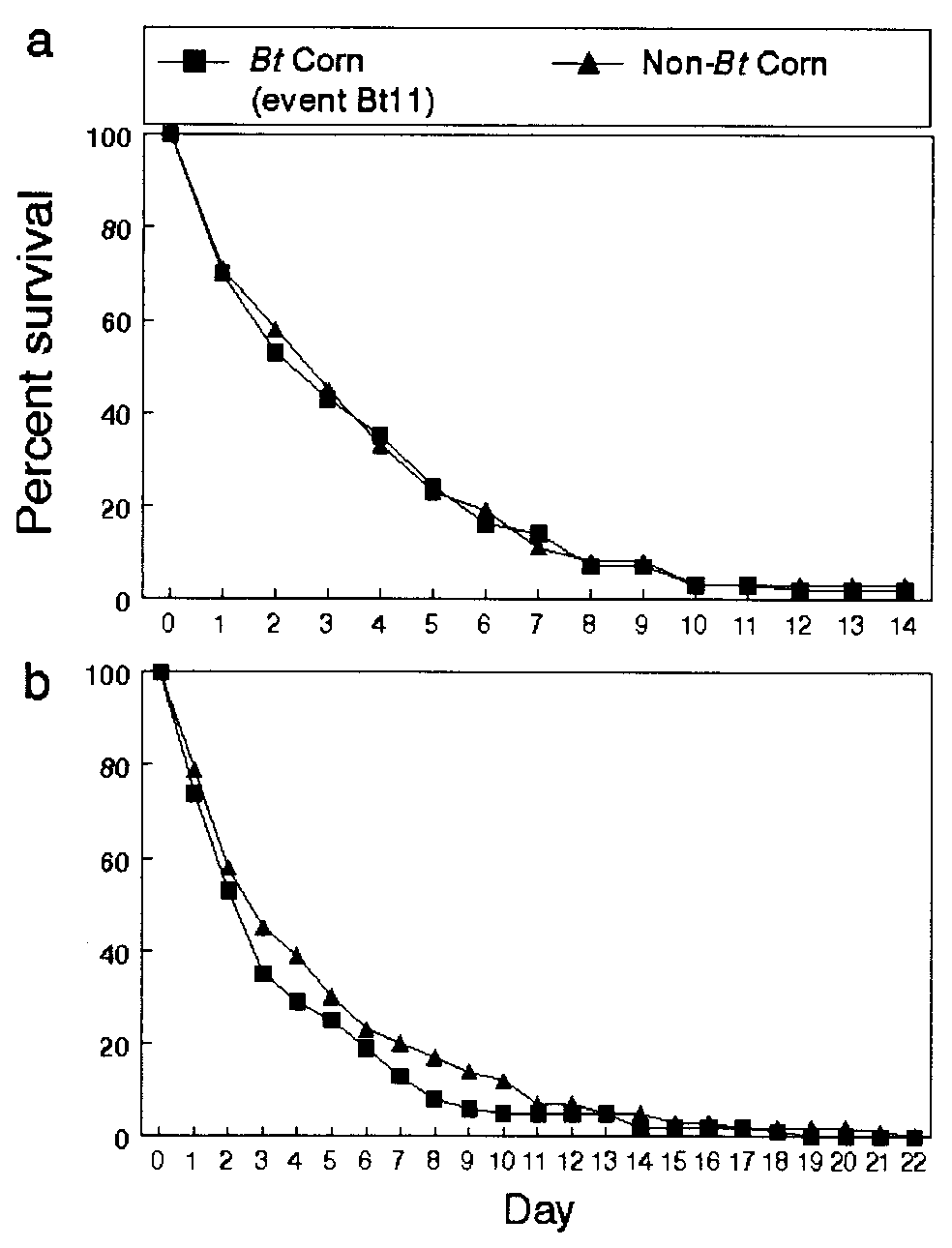