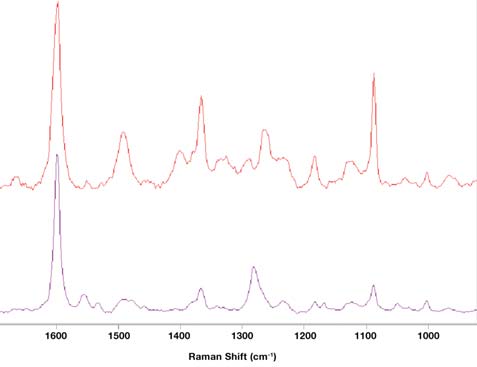 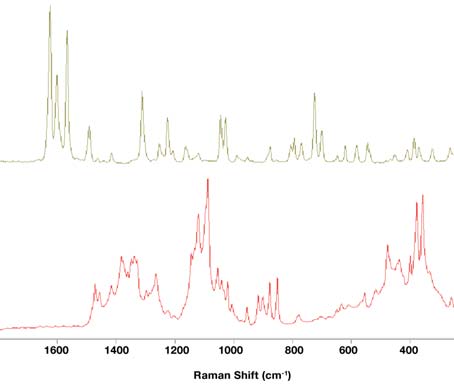 Raman analysis of tablets and packaging
However, analysis of the tablets themselves is the mostdiscriminatory. In order to maximize profit, forgers will Raman spectroscopy is particularly suited to the analysis either forego the use of API in the product or use a cheap of counterfeit materials as it is non-destructive and can API such as aspirin or acetaminophen. More expert be used to assess both the authenticity of the packaging forgers might use the correct API, but have the incorrect blend of fillers (e.g. lactose) and lubricating agents (e.g.
It is often the case that the packaging is printed to look authentic but the inks used are seldom the same as on As can be seen in Figure 2, the genuine pharmaceutical the genuine product. Raman analysis of ink used in the tablet gives a spectrum of a complex blend of API and packaging can be a simple discriminator when identifying excipients while the counterfeit material shows a Raman counterfeit products. In Figure 1 the differences can spectrum consisting entirely of lactose and cellulose.
clearly be seen between the red ink from the authenticpackaging and the ink from an identical-looking counter-feit package. This technique is particularly useful if References
analyzing repackaged, out-of-date product. Analysis of 1. Katie Merx, “Can you tell which pills are fake?”, the polymers in blister packs can also be used to identify Detroit Free Press, July 26, 2006, and Judy Alta, “Counterfeit Drugs Seen as Growing Problem,” The United States Mission to the European Union,November 16, 2006.
Figure 1. Comparison of Raman spectra of ink on outer cardboard pack- Figure 2. Raman spectra of authentic (upper spectrum) and counterfeit aging of authentic (upper spectrm) and counterfeit (lower spectrum) (lower spectrum) tablets, analyzed on RamanStation 400.
pharmaceuticals, analyzed on RamanStation 400.
PerkinElmer, Inc.
940 Winter Street
Waltham, MA 02451 USA
Phone: (800) 762-4000 or
(+1) 203-925-4602
www.perkinelmer.com
For a complete listing of our global offices, visit www.perkinelmer.com/lasoffices
2007 PerkinElmer, Inc. All rights reserved. The PerkinElmer logo and design are registered trademarks of PerkinElmer, Inc. Tylenol is a trademark of McNeil-PPC, Inc. Viagra is a registeredtrademark of Pfizer Inc. All other trademarks not owned by PerkinElmer, Inc. or its subsidiaries that are depicted herein are the property of their respective owners. PerkinElmer reserves theright to change this document at any time without notice and disclaims liability for editorial, pictorial or typographical errors.

BUILDING A NEW MALAYSIAN NATIONAL CINEMA Gregory Wee Lik Hoo Swinburne University of Technology (Sarawak Campus) Abstract The emergence of a new independent group of filmmakers led by Amir Muhammad, James Lee, Ho Yuhang and Yasmin Ahmad has brought a new cinema to Malaysia. Their films have won much accolades in the international arena but at home, they face difficulties in getti