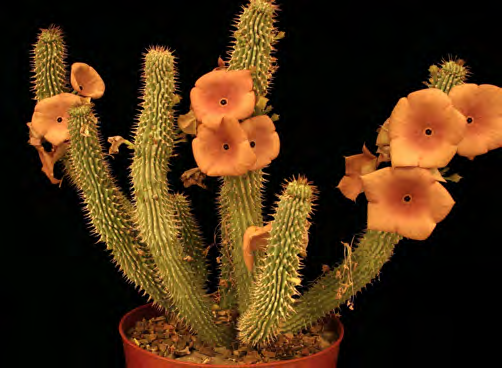 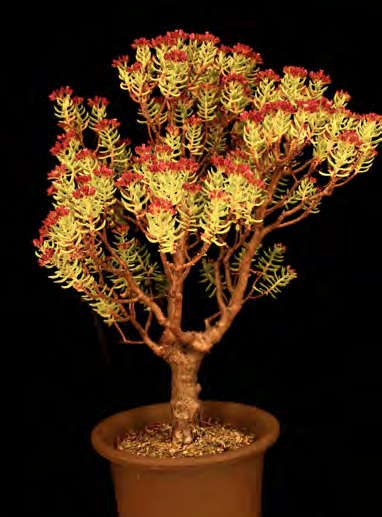 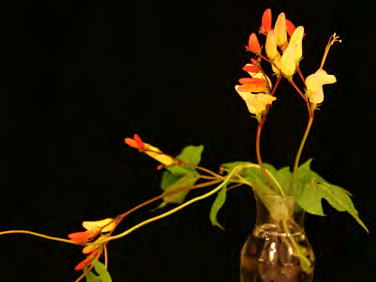 Green Sheet July 2009
Plant Forum Notes
Thank you to all who brought plants to the July 2009 meeting! differences Everyone is encouraged to bring in plants to share with the group. (Angiosperm Remember that you do get one free “exhibitor’s ticket” for the plant raffle if you bring in one or more plants for discussion at In addition to the plants discussed below the following plants, MOBOT/research/ described or listed in the Society’s Selected Plants for Southern APWeb/). It is native to the Americas and has a fairly wide California Gardens (2000) or previously written up for a Green range. This vine may twine up to 20 ft in height given the right Sheet were shown in June [taxon (common name) Family]: conditions, and the impressive inflorescence spikes have flowers Platycodon mariesii (balloon flower) Campanulaceae that start out bright crimson, later fading to yellow. Seeds need Crassula sarcocaulis (bonsai crassula) Crassulaceae (photo soaking in cold water overnight and scarification of the seed coat prior to germination, as do many species in the Convolvulaceae. Dianella tasmanica Anna cultivates this one in Los Feliz.
Hoodia gordonii (hoodia) Apocynaceae. Exhibited by Sula and
Hemerocallidaceae Jorge Ochoa. (photo below) This unusual succulent is characteristic of the African continent, (farewell to spring) with large flattened pink flowers that don’t smell so good (attracting flies as pollinators). Namibia is home to many species Lathyrus latifolius of Hoodia that can be seen along the roadsides while driving. Information in this compilation was gleaned and condensed from Despite its relative abundance in certain areas, its well known the Plant Forum exhibit cards, numerous sources at the Rancho appetite-suppressing properties have led to extensive collecting Santa Ana Botanic Garden Library and a suite of various internet and poaching in Namibia and South Africa, placing this plant on the CITES list as an endangered species with heavy restrictions on its cultivation and trade. Previously classified in the Rosa ‘Lady Hillingdon’ and ‘Isabella Sprunt’. Rosaceae.
Asclepiadaceae, that family is now nested within the Apocynaceae (APG Web). This plant is currently available from These two tea roses share cultivation needs with the other tea Plants for the Southwest in Tucson, Arizona. roses. ‘Isabella Sprunt’ is an attractive yellow rose that fades to white and is a yellow form of the popular fringed rose ‘Safrano’. Strobilanthes gossypinus. Mexican petunia. Acanthaceae.
‘Lady Hillingdon is an orange tea rose. Cathy grows both in This beautiful frost-tender shrub has unique foliage with dense golden hairs that turn silver with age and give the leaves a felted Rosa ‘Moondance’. Rosaceae. Exhibited by Laura Bauer.
appearance while adding a real splash of color to the garden. It This beautiful cream rose was given away in January of 2007 likes a sustained slow-release fertilizer, can be pruned and shaped during the rose forum, and Laura has been cultivating it in a large fairly readily, and reaches around 4 ft tall in Neta’s garden in San pot in Pasadena. Originating from Jackson Perkins Roses, here in Marino. It was first featured in Curtis’s Botanical Magazine in the USA, this is a moderate floribunda flowering in summer. 1901 where it was illustrated with its attractive blue-purple
Ipomaea [syn. Mina] lobata. exotic love vine. Convolvulaceae. flowers. It will prefer a sunny spot in your garden.
Exhibited by Anna Cardella (photograph top right). This herbaceous twining vine was once in the monotypic genus