The Effects of Acid Perfusion of the Esophagus on
Ventilation and Respiratory Sensation
STEPHEN K. FIELD, JOHN A. EVANS, and LORNE M. PRICE
Department of Medicine, Foothills Hospital and University of Calgary, Calgary, Alberta, Canada The relationship between gastroesophageal reflux (GER) and asthma remains controversial. Asthma
symptoms worsen with GER, but are not consistently related to changes in lung function. The pur-
pose of this study was to determine whether acid perfusion (AP) of the esophagus alters ventilation
and causes respiratory symptoms. Nonasthmatic patients with normal lung function and esophageal
disease (16 females and nine males, FEV
1 %predicted
9.6), underwent a Bernstein test after
motility testing. Airflow, rib cage (Vrc), and abdominal (Vab) tidal volumes, esophageal (Pes) and
gastric (Pga) pressure, and surface (Es) and esophageal (Edi) diaphragm electromyographic (EMG)
signals were measured. Throat, swallowing, chest, and stomach discomfort and respiratory sensation
were estimated with the Borg scale. Minute ventilation (VE) increased during AP and declined during
recovery with saline perfusion of the esophagus (7.1 Ϯ 1.5 to 8.5 Ϯ 2.4 to 7.3 Ϯ 2.1 L/min; n ϭ 25; p ϭ
0.0002). Respiratory rate (RR) went from 13.6 Ϯ 2.6 to 15.8 Ϯ 3.4 to 15.3 Ϯ 3.1 breaths/min (n ϭ 25;
p ϭ 0.0002) during AP. VE was greater in the Bernstein-positive patients during AP. Tidal volume
(VT), Vrc, Vab, Pes, Pga, Es, and Edi did not change during AP. Chest discomfort (D) correlated with
ventilation (VE ϭ 0.7 ϩ 0.8 D; r ϭ 0.67; p Ͻ 0.001) and respiratory effort sensation (B) (B ϭ 0.2 ϩ 0.4
VE; r ϭ 0.70; p Ͻ 0.001) during AP. AP did not inhibit diaphragm activity. Increased VE may explain
the paradox of GER worsening respiratory symptoms without changing lung function. Field SK,
Evans JA, Price LM. The effects of acid perfusion of the esophagus on ventilation and respi-
ratory sensation.
AM J RESPIR CRIT CARE MED 1998;157:1058–1062.
The prevalence of symptomatic gastroesophageal reflux chial reactivity in asthmatic individuals (8). The importance of (GER) is greater in asthmatic individuals than in other patient GER in asthma severity has been questioned (9).
populations (1). Abnormal GER as reflected by ambulatory The problem, then, is how best to explain the paradox of pH monitoring criteria has been reported in over 80% of asth- GER worsening asthma symptoms without a clinically impor- matic individuals (2). Some asthma patients experience reflux- tant change in lung function. Studies of respiratory sensation associated respiratory symptoms (RARS), including dyspnea, in other clinical conditions suggest that respiratory effort is its wheezing, and cough (1, 3). These are often severe enough to most important determinant (10). In some conditions, increased warrant additional ␤-agonist use (1, 3). Moreover, Irwin and ventilation causes breathlessness in the absence of changes in coworkers found that treating GER was the most important lung function (11). The purpose of the present study was to intervention for improving patients with difficult-to-control determine whether AP could alter ventilation and respiratory asthma who were referred to their clinic (4).
The strong association between GER and asthma suggests a causal relationship between the two conditions. Most inves- tigators have assumed that the relationship is due to GER The subjects were nonasthmatic patients with normal lung function, triggering bronchospasm. Proposed mechanisms include mi- who were referred for motility testing as part of an investigation for croaspiration or a vagally mediated esophagobronchial reflex esophageal disease. They were willing to give informed written con- (5). However, despite causing respiratory symptoms, both spon- sent for their participation after the experimental protocol was ex- taneous GER and acid perfusion (AP) of the esophagus have plained to them. Instructions to the participants were as complete as only minimal (6, 7) or no effect on either lung function or bron- possible, but specific details about the Bernstein test were withheld toavoid biasing their responses. Because anxiety can contribute tobreathlessness, the patients were reassured and made as comfortableas possible prior to beginning the study. The study was approved bythe Conjoint Ethics Committee of the University of Calgary and Foot- (Received in original form July 21, 1997 and in revised form October 27, 1997) Presented in abstract form at the American Thoracic Society meeting, May 19, Ventilation was measured with a No. 2 Fleisch pneumotachometer (Gould Systems, Cleveland, OH) and a CD15 demodulator Ϯ 2 cm H2O Supported by the Alberta Lung Association and Foothills Hospital Foundation.
pressure transducer (Validyne, Northridge, CA). Flow was integrated Correspondence and requests for reprints should be addressed to Stephen K.
with a model 8815A Hewlett Packard integrator (Waltham, MA). The Field, M.D., F.R.C.P.C., Clinical Professor of Medicine, University of Calgary Med- patients breathed through a mouthpiece attached to the pneumot- ical School, 1403 29th St. NW, Calgary, AB, T2N 2T9 Canada.
achometer, and wore a noseclip. Rib cage and abdominal anteroposte- Am J Respir Crit Care Med
Vol 157. pp 1058–1062, 1998
rior diameters were measured with pairs of magnetometers (GMG Sci- 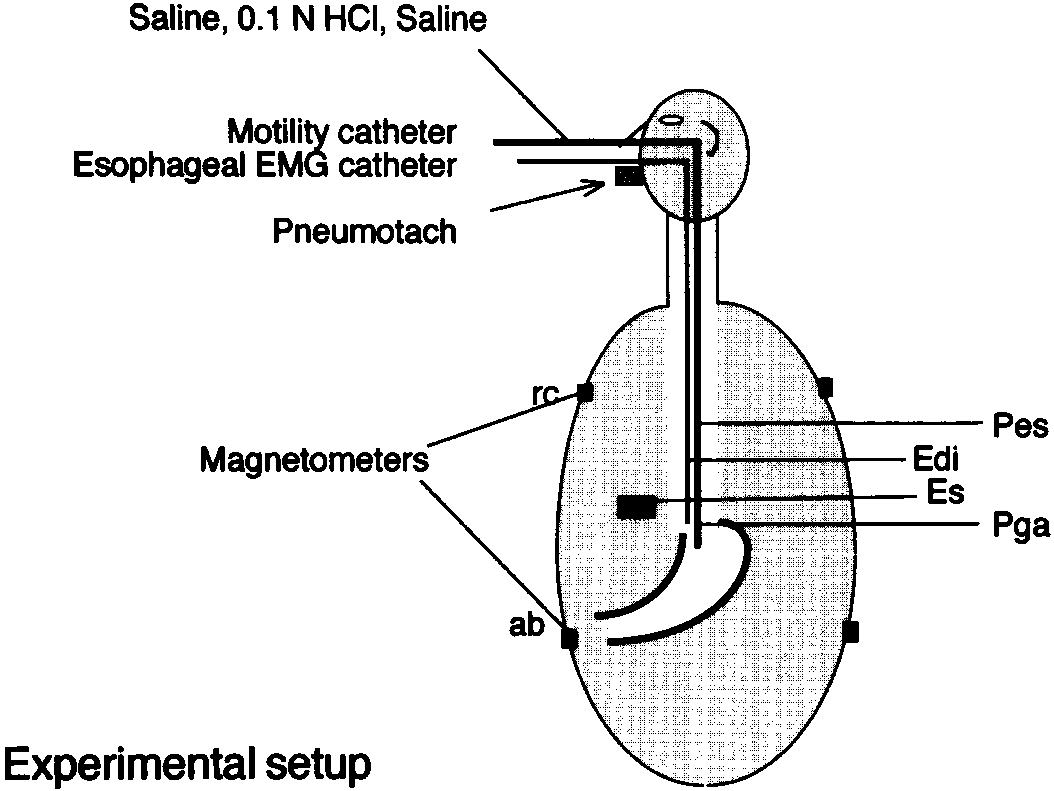 Field, Evans, and Price: Effects of Acid Perfusion of the Esophagus entific, Burlington, MA) placed at the levels of the middle of the body ofthe sternum and just above the umbilicus, respectively. The magnetome-ters were calibrated for volume by the isovolume method (12).
Gastric (Pga) and esophageal (Pes) pressures were measured with a four-channel, water-filled catheter (Mui Scientific, Mississauga, On-tario, Canada). The most distal port was 1 cm from the end of thecatheter. The other three ports were 5 cm from each other, and 6, 11,and 16 cm from the distal end of the catheter, respectively. The proxi-mal ends of three of the channels were attached to pressure transduc-ers (Pressure/perfusion motility system TDS-4000; Sandhill, Littleston,CO). The most proximal channel was used to perfuse the esophaguswith either normal saline or 0.1 N HCl.
Diaphragm electromyographic (EMG) signals were measured both with an esophageal catheter (13) and with surface electrodes.
The surface electrodes were attached on the right side in the seventh,eighth, or ninth intercostal interspaces between the mid- and posterioraxillary lines. The signals were contaminated with expiratory muscleactivity with more anterior placement of the surface electrodes. Thesignals were amplified, bandpass-filtered between 100 and 2,000 Hz,rectified, and integrated, with a 100-ms time constant (1500 systemwith 15C01 EMG amplifiers; DISA, Denmark). All signals were re-corded on an eight-channel paper recorder (7758B recording system; Figure 1. Experimental setup. Diagram shows leads and catheters
Hewlett-Packard Inc., Waltham, MA). The Borg scale was used as the in place. Saline and 0.1 N HCl were infused into the lower esopha- psychophysical measure of breathlessness (14). Patients also used it to gus through the motility catheter. Two of the other ports in the describe the severity of their throat, swallowing, chest, and stomach motility catheter were used to measure esophageal and gastric discomfort during each perfusion period.
pressure. Abbreviations: rc ϭ rib cage magnetometer coil; ab ϭabdominal magnetometer coil; Pes, Pga ϭ locations of ports in ExperimentaI ProtocoI
motility catheter used for measurement of esophageal and gastric The motility studies were done early in the morning, after an over- pressures, respectively; Es ϭ surface EMG electrode; Edi ϭ esoph- night fast. Patients receiving prokinetic agents, omeprazole, or H receptor blockers were asked to discontinue these medications at leastone 1 wk before the study began. Antacids were withheld on the day of the study. Gastrointestinal and respiratory functional inquires were relationship between changes in symptoms and V E was explored with conducted prior to the study. Patients were weighed, measured, and linear regression analysis. Two-sample t tests were used to compare changes from baseline in the BP versus the BN patients. Data were The magnetometry discs and surface EMG electrodes were then expressed as mean SD. The minimum level of statistical significance attached. The four-channel pressure catheter was then inserted, fol- lowed by the esophageal EMG catheter. These catheters were in-serted transnasally, with the aid of lubricant but without topical anes- thetic. The patients were then placed in the supine position and All but one of the 25 patients in the study were referred for remained in that position through the motility and Bernstein tests evaluation of suspected esophageal disease. Presenting symp- (15). The experimental setup is shown in Figure 1.
The motility study took 30 to 45 min. Once it was completed, the toms included dysphagia, atypical chest pain, poorly con- pressure catheter was placed across the lower esophageal sphincter trolled pyrosis despite intensive medical antireflux therapy, or (LES), so that the distal port recorded gastric pressure and the third motility testing was ordered as part of the preoperative evalu- port (11 cm from the catheter tip) recorded Pes. The most proximal ation for esophageal surgery. One patient was referred for port of the pressure catheter was used to perfuse the esophagus with evaluation of intractable chronic cough. This patient had nor- normal saline or 0.1 N HCl at a rate of 5 ml/min. The esophageal mal pulmonary function and methacholine challenge tests.
EMG catheter was then positioned to optimize the inspiratory dia- The characteristics of the study patients are given in Table 1.
phragm EMG signal. This position was usually within 5 cm of the mid- The BP and BN groups were similar with regard to age, gen- point of the LES. The motility study allowed accurate determination der ratio, and body mass index (BMI). Spirometry gave nor- of the location of the LES. The signals were then recalibrated and the To provide a stable baseline, the patients breathed through the Respiratory Symptom and Discomfort Scores
mouthpiece attached to the pneumotachometer, with the noseclip inplace, for a minimum of 5 min before the beginning of the motility Eleven of the Bernstein tests were negative and 14 were posi- study. In sequence, saline, acid, and saline were perfused for 5-min pe- tive. The numeric scores of throat, swallowing, chest, and riods each. The patients were neither told when the infusions were be-gun nor which solution they were receiving. The signals were recordedcontinuously. At the end of each infusion period, the patients were asked to rate their throat, swallowing, chest, and stomach discomfort, ANTHROPOMETRIC DATA FOR THE 25 STUDY SUBJECTS
as well as respiratory sensation with the Borg scale. The motility nursequestioned the patients separately about their symptoms during acid perfusion of the esophagus, and determined whether the Bernstein test was positive (BP) or negative (BN) according to whether acid re- produced their typical heartburn pain.
Statistics
Two-way analysis of variance (ANOVA) was used to compare the re- sults of different continuous variables in the three infusion periods. As Definition of abbreviation: BMI ϭ body mass index.
a follow-up to the two-way ANOVA, Tukey’s studentized range test was used to compare the different parameters between periods. The No significant difference was seen between the groups for any variable. 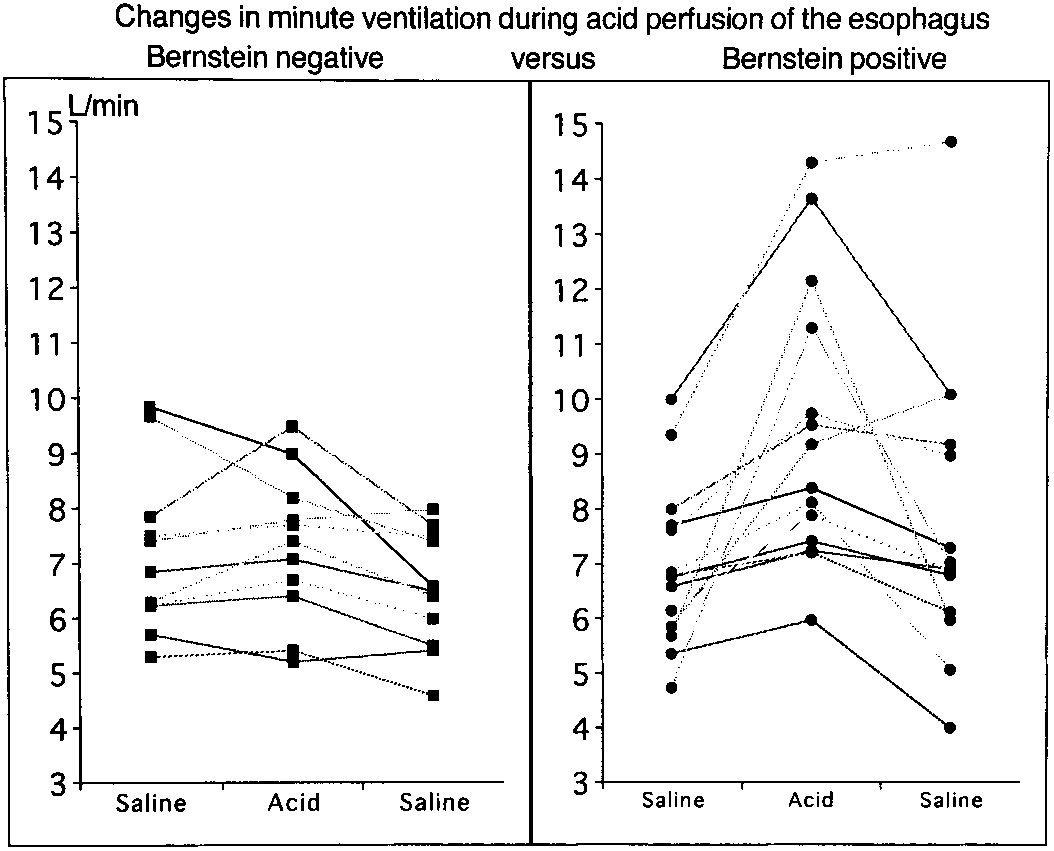 Monday, February 22, 1999 Bob Beck is a physicist, holding a Ph.D in physics from the University of Southern California. He also was previously a Professor at the University of California. He began his professional life as a photo-journalist and owned a photography studio in Hol ywood. He is a researcher and inventor who likes to improve upon other people's inventions. His version of the Brain