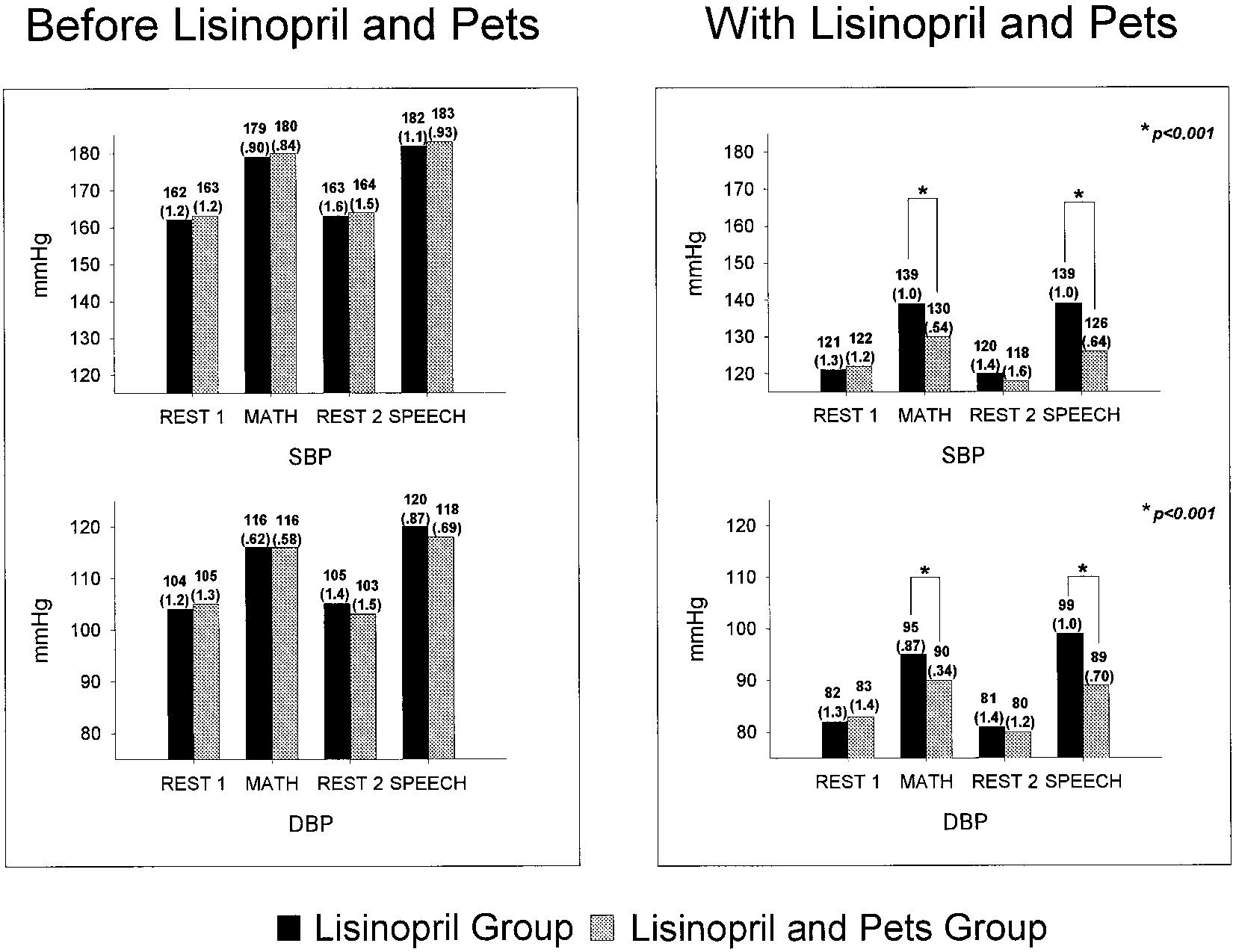 Allen et al
Pets Blunt Reactivity
817
Figure 1. SBP and DBP reactivity (mean [SEM]) in response to MAT and speech both before and during lisinopil therapy and the pres-
ence of a pet.
pet condition, social support, and tasks for all dependent ratios after participants received lisinopril and acquired pets.
Results revealed a main effect for ratio (Fϭ166.90, PϽ0.001) Figure 1 provides SBP and DBP reactivity for each task, and an interaction effect for lisinopril and pet ownership and Figure 2 provides HR and PRA (both before and during (Fϭ140, PϽ0.001.) That is, at the second data collection drug therapy). At the beginning of the study, all participants point (after the acquisition of pets), pet owners had signifi- had stage II hypertension (Ͼ160/100 mm Hg), and after 6 cantly greater improvements in their task performances than months, average blood pressures in both the lisinopril-only and the lisinopril-and-pet groups were within the normalrange. At month 1, MAT and speech elicited significant Discussion
increases in physiological responses of both groups. After 6 In the present study, we examined the effect of pet ownership months, however, relative to those without pets, individuals on cardiovascular responses to psychological stress among a with pets had significantly lower reactivity scores; their group of hypertensive individuals in high-stress professions.
On the basis of these results, we conclude that reactivity andbasal blood pressure are influenced by independent mecha- Comparisons of Office With Home Blood Pressure
nisms; that is, ACE inhibitor therapy lowers only resting Before participants received the medication and acquired blood pressure, whereas the addition of a social support pets, there was a significant difference between office and intervention lowers responses to stress. These results extend home mean SBP (Fϭ2089.36, PϽ0.001) and DBP earlier findings that ACE inhibition fails to diminish BP or (Fϭ4499.23, PϽ0.001) values. When individuals were ad- HR responses to stressful tasks1 to demonstrate a beneficial ministered medication and acquired pets, blood pressure was influence of social factors that may buffer stress responses for again higher in the office than in the home (SBP [Fϭ344.94, persons with hypertension who are treated with ACE PϽ0.001] and DBP [Fϭ1657.37, PϽ0.001]). There were no other main effects associated with these differences.
Interestingly, we found that an individual’s assessment of his or her general social environment was predictive of that Performance Data
person’s BP and HR responses to stress. Even though we did MAT performance was computed for each participant as a not investigate the effect of the presence of friends on ratio between the number of correct answers and the number reactivity, participants who perceived that they belonged to a of attempted answers. We were interested in a comparison of group and had friends to confide in had a lower reactivity to ratios before participants had received lisinopril and pets with stress than did their counterparts who reported few social 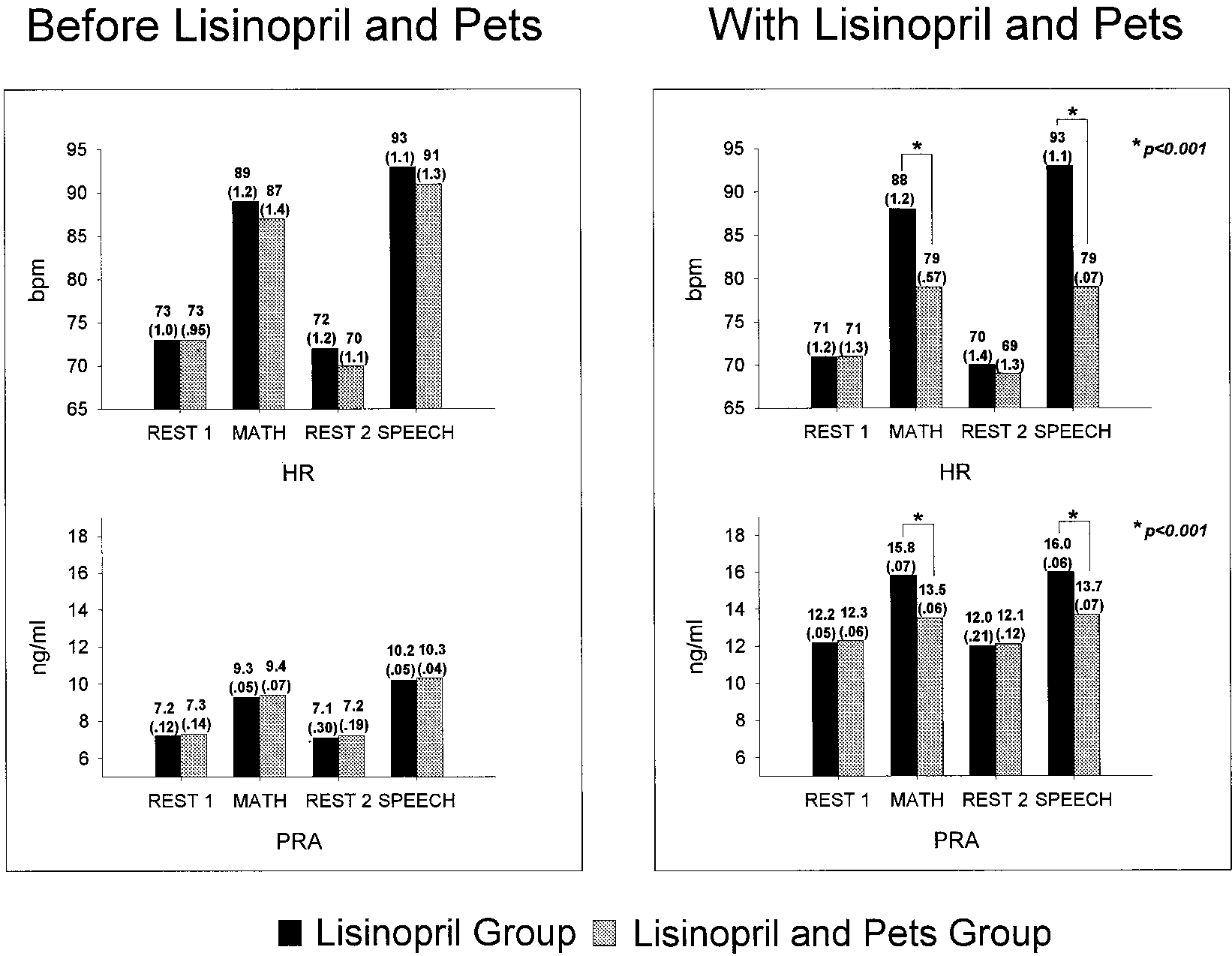