Cadmium inhibits epoxidation of diatoxanthin to diadinoxanthin in the xanthophyll cycle of the marine diatom Phaeodactylum tricornutum Martine BertrandaYbY*, Beno|ªt SchoefsbY1, Pavel Si¡elc, Karel Rohacekc, Istvan Molnarc aInstitut National des Sciences et Techniques de la Mer, Conservatoire National des Arts et Me¨tiers, BP 324, F-50103 Cherbourg Cedex, France bLaboratory of Biomembranes, University of South Bohemia, Branisovska 31, CZ-370 05 Ceske Budejovice, Czech Republic cLaboratory of Photosynthesis, Institute of Plant Molecular Biology, Academy of Sciences of the Czech Republic, Branisovska 31, CZ-370 05 Ceske Budejovice, Czech Republic Received 6 August 2001; accepted 4 October 2001 Abstract Cd has pleiotropic effects on plant physiology and in higher plants and green algae, the xanthophyll cycle consists particular on photosynthesis. It has not been established yet if Cd in the reversible conversion of violaxanthin to zeaxanthin via alters the functioning of the xanthophyll cycle. To answer this antheraxanthin, whereas in chromophytes, it consists in the question, an exponentially growing culture of the marine diatom interconversion of diadinoxanthin (DD) and diatoxanthin Phaeodactylum tricornutum was incubated with Cd (20 mg/l) for (DT) ([9], reviewed in [8]). The activity of this cycle has 24 h and irradiated with a light activating the xanthophyll cycle, been correlated with the thermal dissipation of the excess en- which in diatoms, consists of the reversible deepoxidation of ergy at the antenna side of the photosynthetic apparatus diadinoxanthin to diatoxanthin. The measurements show that the deepoxidation step is not influenced by Cd. In contrast, the Cd In this contribution we report evidence, based on absor- concentration used sharply inhibits the epoxidation of diatox- bance and £uorescence measurements and pigment quanti¢- anthin to diadinoxanthin. ß 2001 Federation of European Bio- chemical Societies. Published by Elsevier Science B.V. All cations, for the partial inhibition by Cd of the epoxidation step of the xanthophyll cycle in the marine diatom Phaeodac- Key words: Algae; Microalgae; Cd; Heavy metal stress; The experiments were performed with the marine diatom P. tricor- nutum BOHLIN COUGHLAN/-632 axenic strain from the collection at the Institute of Botany at Trebon, Czech Republic. The cells were There is considerable concern about the increasing levels of grown in a medium (pH 8.3) containing ¢ltered reconstituted sea heavy metals in the environment and the potential harmful water (33 g/l of commercial salts from the Red Sea), Na2HPO4 (140 WM), NaNO3 (1560 WM), Na2SiO3 (130 WM), CuSO4 (1.4 WM), Co- e¡ects of these elements on living organisms. This is especially (NO3)2W6H2O (1.6 WM), MnCl2 (3.2 WM), Mo (0.7 WM), ZnCl2 (0.3 important in the case of heavy metals like Cd, which have no WM), Fe^EDTA (100 WM), vitamin B1 (54 WM), vitamin B12 (0.7 WM) and vitamin H (700 WM). The chemicals (P.A. quality) were purchased The photosynthetic process is very sensitive to Cd: it re- by Fluka, and the water was of Milli-Q quality (Millipore).
Erlenmeyer £asks containing 100 ml of culture medium were inoc- duces growth, inhibits chlorophyll (Chl) biosynthesis, de- ulated with 25 ml of a mother diatom culture. The microalgae were presses the photosynthetic carbon assimilation, etc. ([2^5], re- grown under a light^dark cycle (16 h/8 h, illumination: £uorescent viewed in [6]). To our knowledge, only scant information is tubes, 40 Wmol photons/m2/s PAR) in a phytotron thermostated at available about the in£uence of Cd on the xanthophyll cycle, an important photoprotection process of photosynthesis trig- Di¡erent concentrations of CdCl2 (0^25 mg/l of Cd) were applied the 4th day after inoculation (exponential phase). Measurements were gered under high-light conditions ([7], reviewed in [8]). In 2.2. Induction of the xanthophyll cycle and £uorescence measurements *Corresponding author. Fax: (33)-2-33 88 73 39.
Chl £uorescence induction kinetics were measured using a PAM E-mail address: [email protected] (M. Bertrand).
101-103 £uorimeter (Walz, Germany). The weak modulated measur- ing light (ML; 1.6 kHz) was delivered by a weak blue LED (V = 450 1 Present address: Plasticite¨ et Expression des Ge¨nomes Microbiens, nm, Nichia, Japan). The light was ¢ltrated through a Corning 4-96 Universite¨ Joseph Fourier, CNRS-FRE 2383, BP 53, F-38041 ¢lter (380 nm 6 V 6 600 nm). The detector was protected by a red Before irradiation of a cell suspension by actinic light (AL), each Abbreviations: AL, actinic light; Chl, chlorophyll; DD, diadinoxan- sample was dark-adapted for 15 min and irradiated by a weak far-red thin; DT, diatoxanthin; DTT, dithiothreitol; F0, minimum chloro- (FR) light (V = 735 nm, V10 Wmol/m2/s) for 5 s to re-oxidize the phyll £uorescence level; F0P, minimum chlorophyll £uorescence level electron transport carriers. Then, the minimum Chl £uorescence level of the light-adapted state; FM, maximum chlorophyll £uorescence (F0 ) corresponding to open photosystem II (PSII) reaction centers level; FMP, maximum chlorophyll £uorescence level of the light- was recorded using ML. Next, one polychromatic saturation pulse adapted state; Fv, variable £uorescence; FR, far-red; ML, modulated (SP; 1000 Wmol/m2/s, 1 s, light source: KL 1500 lamp, Walz, Ger- measuring light; NPQ, non-photochemical quenching; PSII, photo- many) was applied to determine the maximum £uorescence level (FM).
After three min of relaxation in the dark, the suspension was illumi- 0014-5793 / 01 / $20.00 ß 2001 Federation of European Biochemical Societies. Published by Elsevier Science B.V. All rights reserved.
PII: S 0 0 1 4 - 5 7 9 3 ( 0 1 ) 0 3 0 5 0 - 2 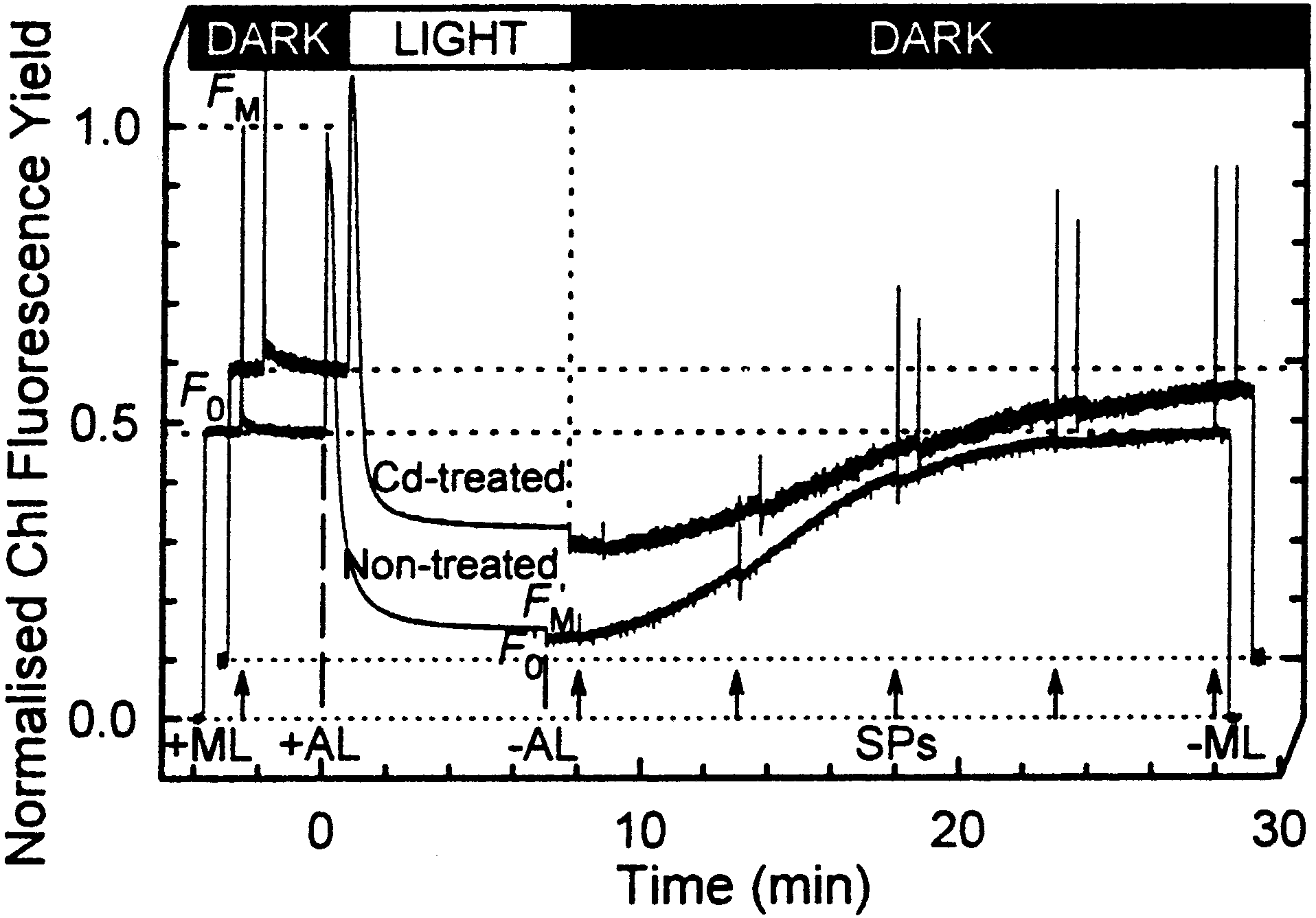 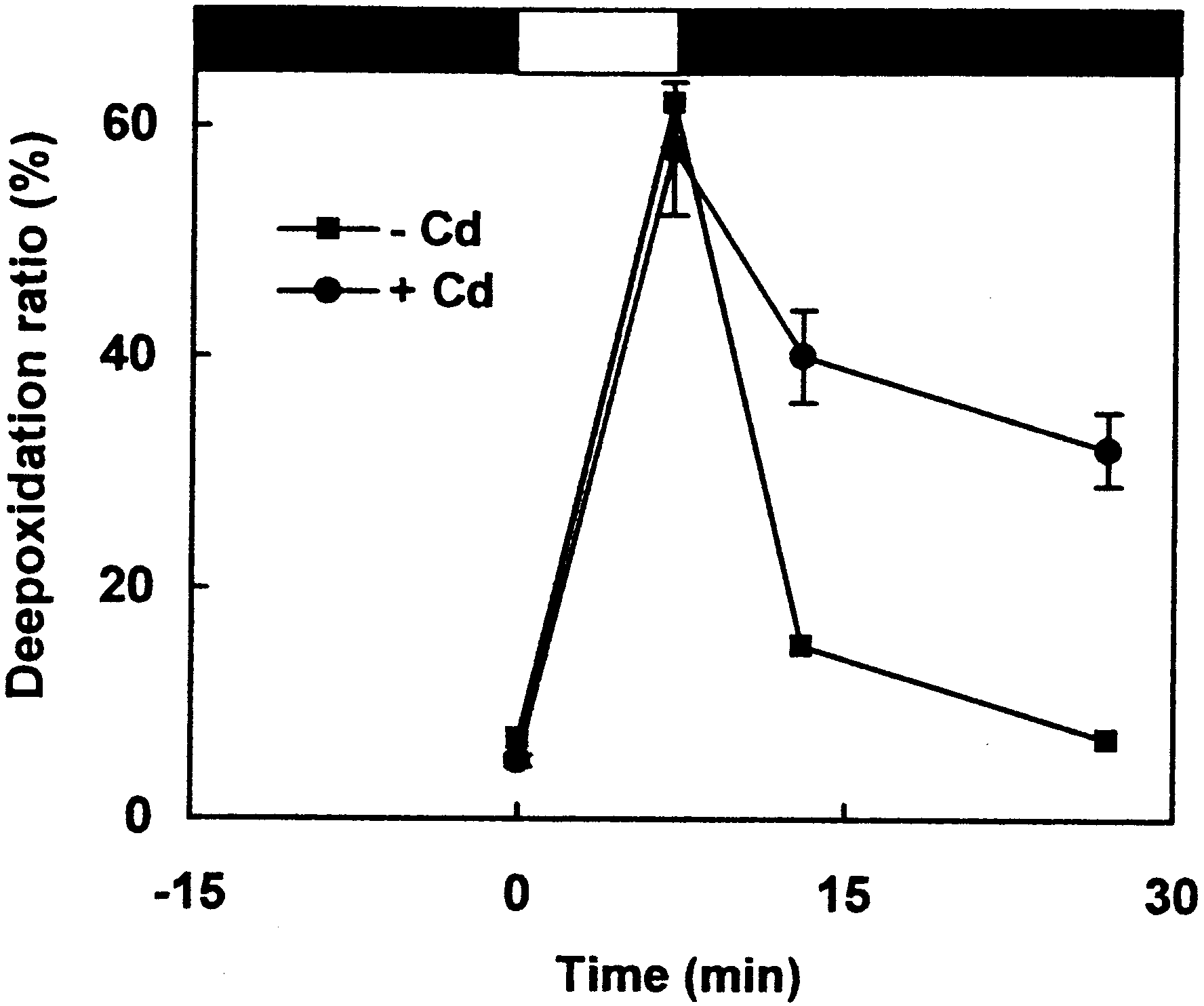 M. Bertrand et al./FEBS Letters 508 (2001) 153^156 nated with AL (1000 Wmol/m2/s, light source: KL 1500 lamp, Walz, Germany) for 7 min to induce £uorescence quenching. The intensity of AL was high enough to keep the PSII closed throughout the ex- posure and thus the observed £uorescence decline only represents When AL was switched o¡ and FR was applied, the minimum Chl £uorescence level corresponding to the light adapted state (F0P) was determined. Then, dark relaxation of both F0P and maximum Chl £uorescence level of the light-adapted state (FMP) were measured.
During this period, light pulses were given at a regular interval of 5 min. The ¢rst one was triggered 1 min after switching o¡ the AL (see Fig. 1). Variable £uorescence (Fv) was calculated as (FM3F0).
2.3. Pigment extraction and separation by HPLC One milliliter of cells was taken at selected moments of the light^ dark treatment described above (see Fig. 2). The cells suspension was spun down at 4000Ug. The supernatant was discarded and the pig- ments were extracted with 800 Wl tetrahydrofuran. The extract was centrifuged at 15 000Ug and the pellet was extracted again with 400 Wl acetone. The operation was repeated once, but using 800 Wl methanol.
After the last centrifugation, the pellet was colorless. The colored supernatants were pooled, ¢ltered on a PTFE ¢lter membrane (pore Fig. 2. Variations of the relative amount of DT during the light^ diameter: 0.45 Wm), and dried under a nitrogen stream. The dried dark sequence applied on P. tricornutum grown in the absence or pigments were either directly used for HPLC analysis or stored at 380³C. All the operations were performed in a cold room and under a dim green light to avoid pigment alterations [12].
The dried samples were dissolved in 250 Wl of methanol and ana- periments using dithiothreitol (DTT), the algae were incubated in the lyzed according to [13]. The diode-array detector, the pump system presence of the compound (1 mM) in the dark for 20 min.
and the column were described elsewhere [14]. All solvents were of HPLC quality. DD and DT were detected on the basis of the chro- matograms recorded at 445 and 451 nm, respectively.
3.1. In£uence of Cd concentration on the cell growth Light-induced absorbance di¡erence spectra were measured on cell The increase of Cd concentration in the culture medium suspensions with the laboratory-built £ash spectrophotometer com- reduced the growth rate: the higher the concentration in posed of a microsecond Xe £ash lamp (FX-1160, EG4G, USA, £ash duration of 1 Ws), an imaging monochromator (MS257, Oriel, USA) Cd, the lower the rate (data not shown). The growth rate and an acquisition and triggering unit FL100 (Photon System Instru- was reduced by 50% using a concentration of 20 mg Cd/l. A ments, Czech Republic). The detector was composed of two large area similar value was reported in [15]. Therefore, this concentra- photodiode arrays (S4111, Hamamatsu) for sample and reference.
tion was used for all the experiments.
Measuring light pulse was ¢ltered using a combination of GG475 ¢lter (Schott, V s 480 nm) and a Corning 4-96 ¢lter (380 nm 6 V 6 600 nm), divided to sample and reference channels by a 3.2. Cd slows down the £uorescence yield relaxation broadband beam splitter and focused to sample and reference cells.
In photosynthetic organisms, the relative decrease of the After passage of light through a sample and a reference, both light £uorescence yield is correlated with the activity of the xantho- beams were focused to two bundles of optical ¢bers and directed to phyll cycle (higher plants: [16], diatoms: [17,18]) although it the monochromator input. This experimental setup gave a noise as low as 2U1034 per one £ash with a spectral resolution of 2.1 nm per cannot be fully explained by the xanthophyll conversion one spectral point. Each absorbance measurement represents an ac- [10,17,18]. Fig. 1 presents typical Chl £uorescence induction cumulation of 10 spectra measured within 1 s. The Chl concentration kinetics of non-treated and Cd-treated cells. The comparison was approximately 20 mg/l. To reach this concentration, the cells were of the ¢gures presented in Table 1 clearly indicated that Cd sedimented without centrifugation (15 min in darkness). For the ex- has no e¡ect on the maximum yield of PSII photochemistry (Fv/FM) or the NPQ mechanism ((FM3FMP)/FMP), which did not di¡er signi¢cantly in Cd-treated algae. However, the rate of the F0P relaxation in the dark is reduced by 58% in the Cd- It has been shown that the F0 quenching is of non-photo- chemical nature. It could be induced by the formation of high- energy state of thylakoid membranes [19,20], photoinhibition of PSII reaction centers and/or by the xanthophyll cycle ac- tivity [21,22]. Depression of £uorescence intensity by photo- inhibition is accompanied by a pronounced decrease of the Fv/FM ratio, which is not observed in the presence of Cd (Table 1). High-energy state of thylakoid membranes of high- E¡ects of the Cd addition on the Chl £uorescence induction param- Fig. 1. Typical Chl £uorescence induction kinetics recorded with liv- ing cells of P. tricornutum in the absence or presence of Cd (20 mg/ 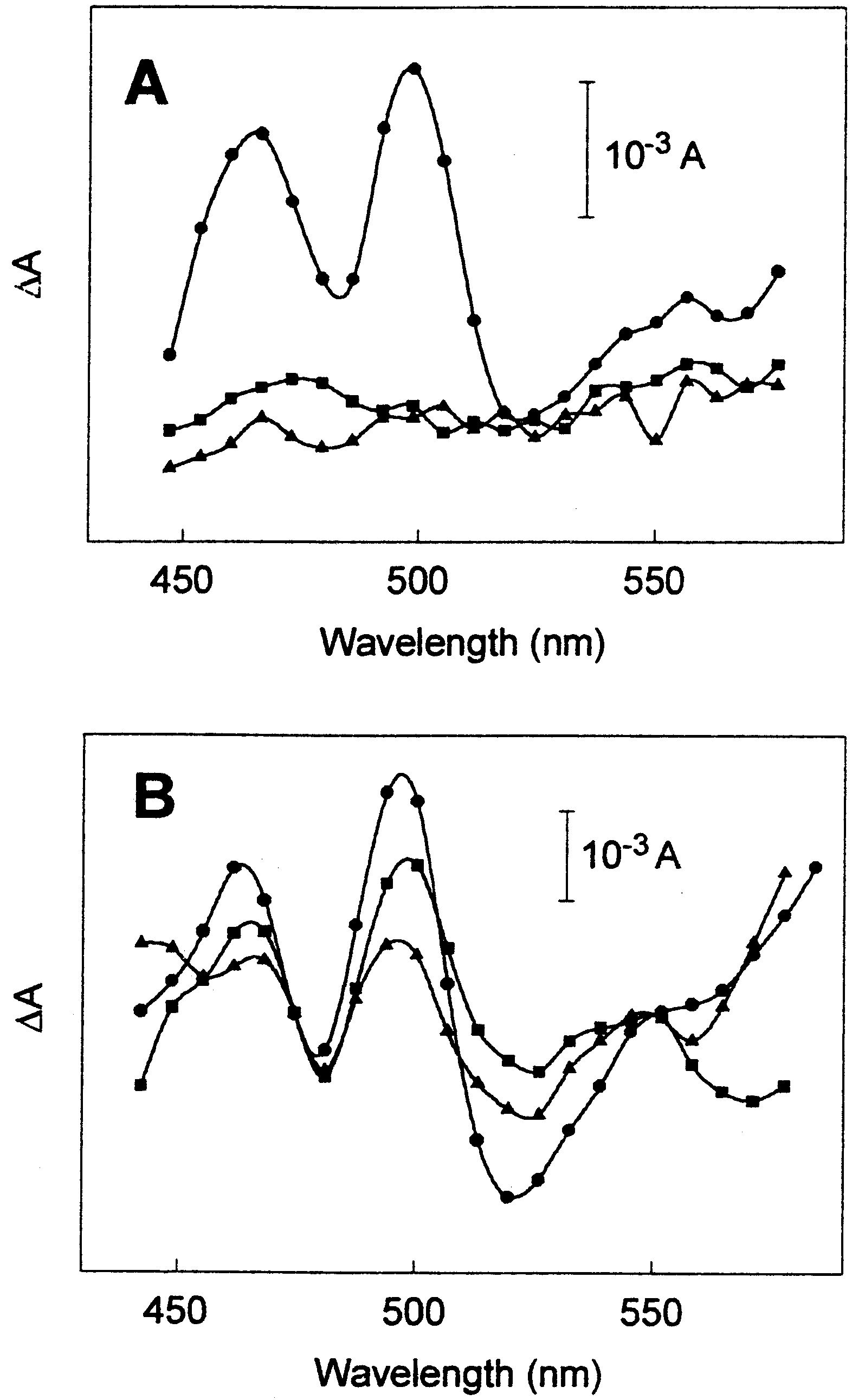 Condensed by Berni Michel-Samuels, CBC Administrative Assistant SPECIAL SESSION on February 3rd, 2005 10-signature Approve grant application for funding from US Department 2005-038.com of Commerce, Economic Development Administration in the HM, GD, DL, MH) 0 AGAINST 0 amount of $43,000 as submitted by the Tribal Planning Department. The Chair or designee is authorized to sign. 10-s