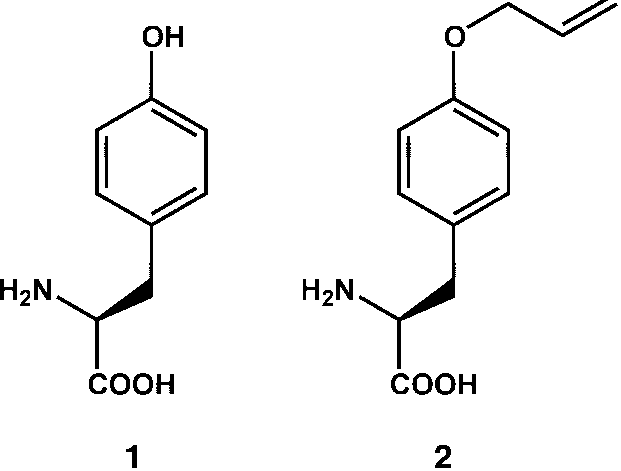 [12] The side product related to 6 was also formed, but the optical purity of O-allyl-l-tyrosine (2) into proteins in E. coli. The alkene functional group of this unnatural amino acid should provide [13] M. Shimazaki, H. Haram, K. Suzuki, G.-i. Tsuchihashi, Tetrahedron new chemical methods for the selective modification of Lett. 1987, 28, 5891; K. Suzuki, E. Katayama, G.-i. Tsuchihashi, [14] Rearrangements of optically active vinyl epoxides mediated by Lewis Previously we generated an orthogonal tRNA ± synthetase acids give quaternary asymmetric carbon centers with inversion of the pair, mutRNATyr ± TyrRS, in E. coli by modifying the configuration: a) M. E. Jung, D. C. D×Amino, J. Am. Chem. Soc. 1995, tRNATyr ± TyrRS pair of Methanococcus jannaschii.[4, 5] This 117, 7379; b) for rearrangements that involve a sterically restricted mutRNATyr is not aminoacylated by endogenous synthetases cation center, see: S. A. Monti, S.-C. Chen, Y.-L. Yang, S.-S. Yuan, O. P. Bourgeois, J. Org. Chem. 1978, 43, 4062.
in E. coli, and functions well in translation. The TyrRS does [15] The enantiomeric purity of 15 was determined by HPLC (Chiralcel- not aminoacylate E. coli tRNAs,[6] but aminoacylates the with tyrosine (1); the acylated mutRNATyr [16] C. H. Senanayake, R. D. Larsen, T. J. Bill, J. Liu, E. G. Corley, P. J.
inserts tyrosine in response to the amber nonsense codon. To change the substrate specificity of the TyrRS so that itaminoacylates the mutRNATyr common amino acids, a mutant TyrRS library was generated The Selective Incorporation of Alkenes intoProteins in Escherichia coli** Zhiwen Zhang,[] Lei Wang,[] Ansgar Brock, andPeter G. Schultz* The addition of amino acids with novel functional groups to the genetic code of Escherichia coli should greatly enhanceour ability to study protein structure and function, as well asgenerate proteins with novel properties. We recently showedthat the unnatural amino acids O-methyl-l-tyrosine and l-3- and selected. Based on an analysis of the crystal structure of (2-naphthyl)alanine can be site-specifically incorporated into the homologous TyrRS from Bacillus stearothermophilus,[7] proteins in Escherichia coli with high efficiency and fidel- five residues (Tyr 32, Glu 107, Asp 158, Ile 159, and Leu 162) in ity.[1, 2] This result requires the addition of an orthogonal the active site of M. jannaschii TyrRS that are within 6.5 ä of tRNA ± codon pair and aminoacyl-tRNA synthetase to the the para position of the aryl ring of tyrosine were randomly translational machinery of the cell. The new synthetase (and mutated.[1, 8] This mutant library was first subjected to a only this synthetase) aminoacylates the orthogonal tRNA positive selection based on the suppression of an amber codon (and only this tRNA) with the unnatural amino acid only, introduced at a nonessential position (Asp 112) in the which is inserted into proteins in response to the amber chloramphenicol acetyl transferase (CAT) gene. Cells trans- codon, TAG.[3] We report here the site-specific incorporation formed with the mutant TyrRS libraries, the mutRNATyr gene, and the amber mutant CAT gene were grown in minimal media containing 1 mm 2 and 70 mg mLÀ1 chloramphenicol.
The survivors must encode a mutant TyrRS that amino- the Skaggs Institute for Chemical Biology acylates the mutRNATyr with either 2 or endogenous amino acids. To remove mutant synthetases with specificities for 10550 North Torrey Pines Road, La Jolla, CA 92037(USA) endogenous amino acids, a negative selection was applied.
Fax: ( 1) 858-784-9440E-mail: [email protected] Three amber codons were introduced at nonessential posi- tions (Gln 2, Asp 44, Gly 65) in the toxic barnase gene.[9] Cells expressing the mutant synthetase from the positive selection, the mutRNATyr gene, and the amber mutant barnase gene 10550 North Torrey Pines Road, La Jolla, CA 92037(USA) were grown in Luria ± Bertani (LB) media in the absence of 2.
Cells encoding synthetases with specificities for any endoge- Department of ChemistryUniversity of California at Berkeley nous amino acids will produce barnase and die. Only those encoding a mutant synthetase with specificity for 2 can Genomics Institute of the Novartis Research Foundation After three rounds of positive selection alternating with two 10675 John Jay Hopkins Drive, San Diego, CA 92121 (USA) rounds of negative selection, a clone was evolved whose [] These authors contributed equally to this work.
survival in chloramphenicol was dependent on the presence of [**] Support for this work was provided by the Department of Energy, 2 when the selected mutant TyrRS gene (AL-TyrRS) was Basic Energy Sciences Program, and the National Institutes of Health.
coexpressed with the Asp 112amber CAT gene and the We thank Dr. Steve Santoro for plasmid pREP(2) and Sheng Ding forhelpful discussions. This is TSRI manuscript no. 14950-CH.
mutRNATyr gene. Cells can survive in 120 mg mLÀ1 chloram- ¹ WILEY-VCH Verlag GmbH, 69451 Weinheim, Germany, 2002 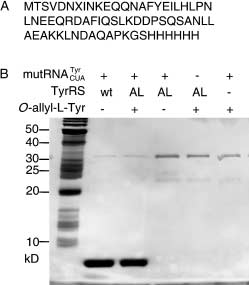 phenicol in the presence of 2, and up to 10 mg mLÀ1 chloramphenicol in the absence of 2. For comparison, E. coli mutRNATyr ± AL-TyrRS was analyzed by electrospray ion- cells expressing the Asp112amber CAT gene and the ization Fourier transform ion cyclotron resonance mass gene survive in 4 mg mLÀ1 chloramphenicol.[5] spectrometry (FT-ICR MS). The experimental monoisotopic This result suggests that the AL-TyrRS has higher activity for mass of the intact protein was 7963.891 Da, which is within 2 than for natural amino acids. The evolved AL-TyrRS has the 1 ppm of the theoretical mass of 7963.889 Da. Another major following mutations: Glu 107 3Ala 107, Asp 158 3Cys 158, signal corresponds to the protein without the first methionine and Ile 159 3Ala 159. The residues Tyr 32 and Leu 162 remain unchanged. The mutations of Glu 107 3Ala 107and Ile 159 The signal-to-noise ratio of more than 1500 observed in the 3Ala 159 may enlarge the active site of the mutant synthetase intact protein mass spectrum suggests a fidelity for the to accommodate the allyl group. The exact roles of these incorporation of 2 of better than 99.8 %. This result clearly mutations will be revealed by solving the crystal structure of demonstrates the site-specific incorporation of 2 in response to the amber codon by the mutRNATyr ± AL-TyrRS, and that To confirm that the observed phenotype is caused by the other endogenous E. coli synthetases do not utilize 2 as a site-specific incorporation of 2 by the mutRNATyr ± AL- TyrRS pair, a mutant Z domain[10, 11] protein was produced In summary, a useful nonnatural amino acid, O-allyl-l- and characterized. An amber codon was introduced at the tyrosine, has been site-specifically incorporated into proteins seventh position in the gene encoding the Z domain. A His6 in vivo. The allyl group is versatile in organic transformations, tag was added to the C terminus of the Z domain to facilitate including metathesis,[13] Diels-Alder and 1,3-dipolar cyclo- protein purification by Ni2-affinity chromatography. As a addition reactions.[14] Olefin metathesis has been used suc- positive control, the wild type M. jannaschii TyrRS was cessfully to cross-link amino acid derivatives[15] and cyclize coexpressed with the mutRNATyr , which resulted in the peptides.[16, 17] Recent progress in developing water-soluble suppression of the amber codon with tyrosine and production ruthenium catalysts[18] should facilitate the application of this of full-length Z-domain protein (Figure 1). When AL-TyrRS reaction to the modification of proteins containing alkenegroups.[19, 20] Moreover, the allyl side chain of this nonnaturalamino acid may confer new physical properties on proteins aswell.
All chemicals were purchased from Aldrich. NMR spectroscopic data wasrecorded using a Bruker AMX 400. Mass spectra of small molecules wereobtained from Scripps Center for Mass Spectrometry.
Synthesis of 2: O-allyl-l-tyrosine (2) was synthesized according to thepublished procedures[21] with minor modifications. N-(tert-butoxycarbon-yl)-l-tyrosine (2.95 g, 10 mmole) was dissolved in 80 mL of N,N-dimethyl-formamide (DMF). The solution was cooled to 5 8C and NaH (0.63 g,26 mmole) was added. The reaction mixture was allowed to warm up to10 8C and stirred for an additional 2 h. Allyl bromide (1.33 g, 11 mmole)was then added with stirring and the reaction mixture was warmed to roomtemperature and stirred for an additional 4 h. Water was added and theaqueous layer was extracted with ethyl acetate and CH2Cl2. The organiclayer was dried over anhydrous MgSO Figure 1. A) Amino acid sequence of the Z domain. X indicates the to afford a white solid, which was then refluxed in 4 m HCl in 1,4-dioxane position for incorporation of 2 encoded by the amber nonsense codon; for 4 h. All solvent was evaporated to give the desired product as a white B) SDS-PAGE analysis of the accumulation of Z domain under different conditions. The far left lane is a molecular-weight marker. Expression 5.1 Hz, 1 H), 4.53 (d, J  4.6 Hz, 2 H), 5.37(q, J  17.4, 11.3, 10.6 Hz, 1 H), conditions are noted at the top of each lane. Proteins were purified by Ni2- 5.99 (m, 1 H), 6.91 (d, J  8.4 Hz, 2 H), 7.12 ppm (d, J  8.4 Hz, 2 H);[21] affinity chromatography and the gel was silver-stained.[12] AL-TyrRS  O-allyl-l-tyrosine-specific mutant synthetase; wt  wild type.
3OD): d  40.0, 69.5, 73.1, 115.8, 117.4, 130.5, 131.5, 135.6, 158.4, 177.5 ppm; m/z (ESI, MH): 222.19.
Selection for AL-TyrRS: The positive selection based on the suppression ofan amber codon in chloramphenicol acetyl transferase was carried out as was expressed together with the mutRNATyr in the presence described.[1] For the negative selection, plasmid pLWJ17B3 was used to of 2, full-length Z domain was also obtained. In the absence of under the control of the lpp promoter and either the AL-TyrRS, the mutRNATyr , or 2, no full-length rrnC terminator, and the barnase gene with three amber codons at Gln 2, Asp 44, and Gly 65 under arabinose induction. After positive selection, Z domain was observed. These results show that full-length pBK plasmids encoding mutant TyrRS were isolated and transformed into mutant protein is produced only in the presence of the AL- E. coli DH10B competent cells harboring pLWJ17B3. Cells were grown in TyrRS, the mutRNATyr , and 2. The yield of full-length LB media containing 0.2 % arabinose, 50 mg mLÀ1 kanamycin, and mutant Z domain containing 2 is 5.6 mg LÀ1 in minimal media.
35 mg mLÀ1 chloramphenicol. After 8 h, cells were pelleted, and pBKplasmids were purified for further rounds of selection. After sequential For comparison, the yield of Z-domain is 9.2 mg LÀ1 when the positive, negative, positive, negative, then positive selection, the candidate and wild-type M. jannaschii TyrRS are coex- pBK-ALRS encoding AL-TyrRS was identified and characterized using an in vivo chloramphenicol acetyl transferase assay.[5] ¹ WILEY-VCH Verlag GmbH, 69451 Weinheim, Germany, 2002