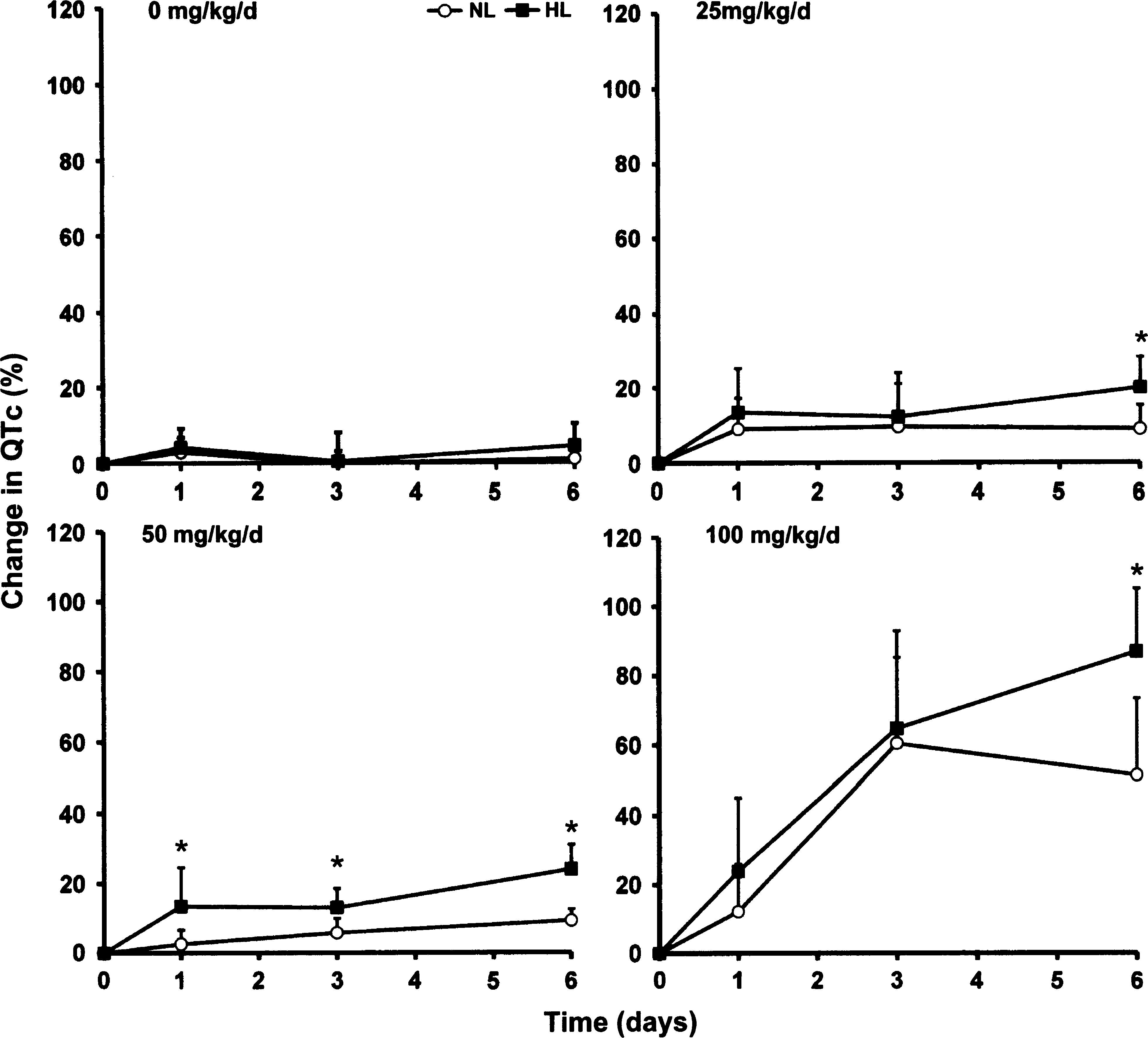 J Cardiovasc Pharmacol ä  Volume 00, Number 0, Month 2009 FIGURE 1. Percent change in QTcinterval (mean 6 SD) in NL and HLrats after IV doses of 0, 25, 50, and100 mgÁkg21Ád21 AM HCl on days 1,3, and 6 of the study. *Significantdifference between HL and NL rats(P , 0.05).
(Table 1). At the end of the study, heart AM concentrations differential in the slope (approximately 10-fold higher for NL) were significantly higher (.1.7-fold) in AM-treated HL rat between the NL and HL animals. Similarly, there was a strong groups than likewise treated NL rat groups (P , 0.05; Fig. 2).
linear correlation between AM heart concentrations and The heart concentrations of DEA in all groups showed a trend change in QTc, although here the slopes were similar (Fig.
(.1.3-fold) toward increases in HL rats compared with NL rats, 3). The relationships between total AM heart uptake and total although the values were variable, and statistical differences AM plasma concentration for both NL and HL rat groups were only detected between the 100 mgÁkg21Ád21 AM-treated yielded strong correlations although with different slopes HL and NL rats (Table 1). A disproportionate increase in AM (NL = 9.6; HL = 1.3, Fig. 4). These slope values closely plasma and heart concentrations was noted 12 hours after the matched those of the heart to plasma concentration ratios (Kp) last dose in NL and HL rat groups upon increasing the daily previously observed for AM when given as single doses to NL dose from 50 to 100 mgÁkg21Ád21. Thus a 2-fold increase in (8.7) and HL (2.1).22 Strong positive and significant linear the dose resulted in .4-fold increase in AM plasma and heart correlations were noted in the plasma CHOL:TG ratios versus trough concentrations in both NL and HL rats (Fig. 2; Table 1).
the QT interval, plasma AM, and heart AM concentrations The same dose-dependent nonlinear pattern was demonstrated (Fig. 5), for both NL and HL rats. The slopes of the relationships, however, were much higher for the HL rats.
For the NL rats, the accumulation factors for mean plasma concentrations, respectively, were 1.96 6 0.58, 1.59 60.155, and 4.87 6 1.60 for the 25, 50, and 100 mgÁkg21Ád21 doses. The corresponding accumulation factors for HL rats The HL state is a precursor to cardiovascular disease were 8.08 6 11.9, 15.0 6 17.6, and 27.5 6 38.4, respectively.
and as such is likely to be present in patients receiving AM.
In terms of ranking, the accumulation factor of the highest To induce HL here, P407 was used; its IP administration is dose of NL rats was significantly higher than that of the lower known to cause a profound but reversible rise in circulating doses in NL rats. There were no differences noted between lipoprotein, particularly those of the very low density cate- accumulation factors of the HL rats.
gory.30 Although lipoprotein concentrations are greatly in- There was a strong correlation noted between AM creased, it does so with no apparent toxicity, and additionally, plasma concentrations and change in QTc interval, in both NL P407 provides one of the few rodent models of HL in which, and HL rat groups (Fig. 3). However, there was a large 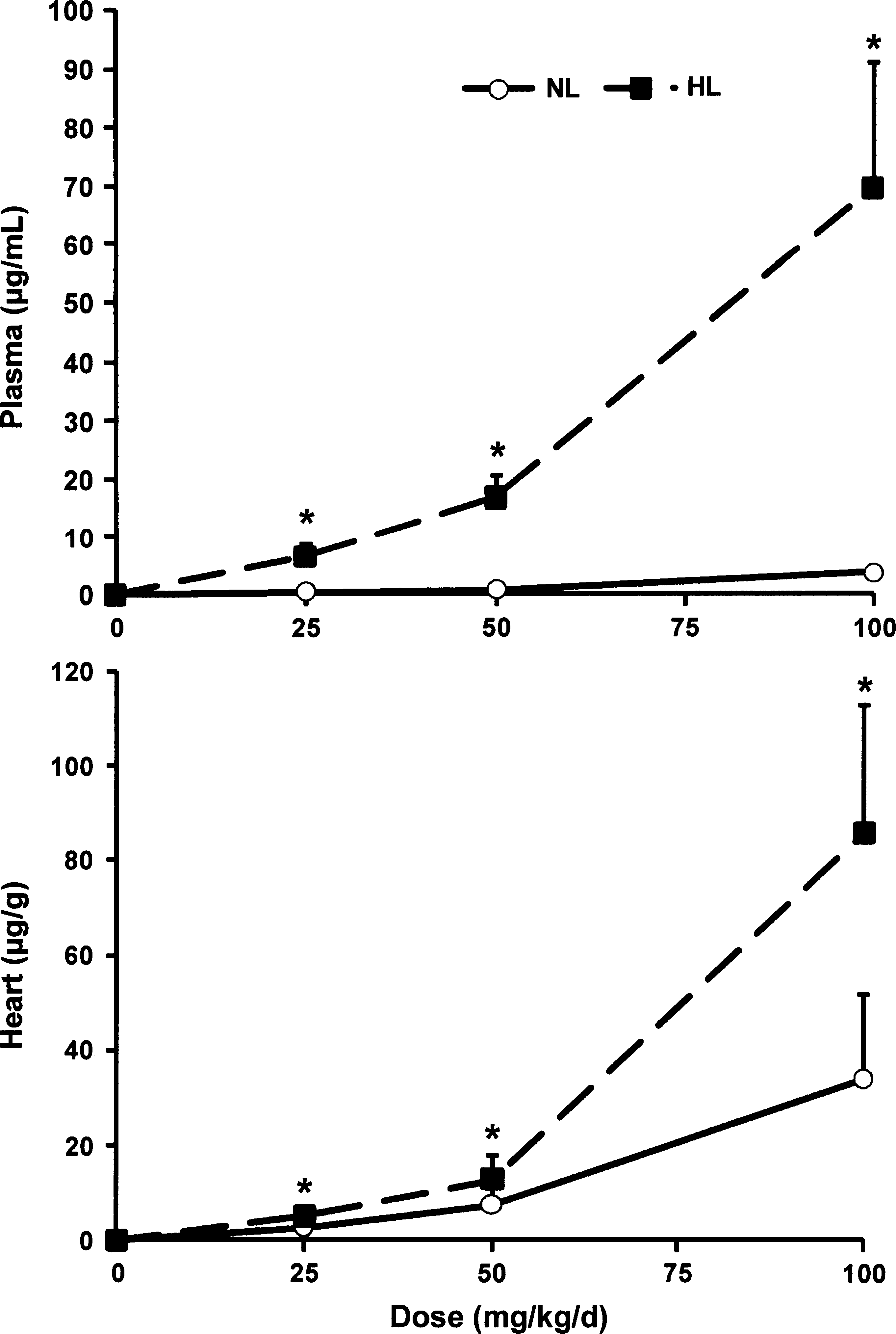 J Cardiovasc Pharmacol ä  Volume 00, Number 0, Month 2009 prolongation in the QTc, RR, and PR intervals of the ECG.
Some strong linear correlations were observed between AMheart concentrations and QTc interval prolongation in both NLand HL rats with very similar slopes, indicating similar effectsat the level of the heart (Fig. 3). However, although therelationship between AM total (bound + unbound) plasmaconcentrations and QTc interval prolongation was linear inboth groups, the slope in NL rats was 10-fold higher than HLrats, suggesting heterogeneity in the heart uptake of the drugbetween the 2 groups (Fig. 3). Because it is commonlybelieved that only the unbound drug is capable of traversingthe cell membrane and exerting the pharmacological activity,and because the drug had the same concentration versus effectrelationship at the level of the heart (Fig. 3), the slopes ofunbound concentration versus heart uptake should match. Itwas possible to estimate the unbound AM plasma concentra-tions by multiplying previously obtained estimates of theunbound fraction in NL (0.0853%) and HL (0.00345%) plasmaby the total drug (bound + unbound) concentrations.12,22 Indoing so, it was clear that there was a difference in NL and HLslopes of unbound plasma AM concentrations and heart uptake,indicating that an additional factor besides unbound fraction wasinvolved in controlling uptake of AM into the heart (Fig. 4).
It had previously suggested that the cause of the increased heart concentrations of AM in HL rats was at least inpart due to the influence of VLDL receptor–mediated uptakeof drug.22 There are 9 members of the LDL receptor familywhich comprise cell surface receptors that transport a numberof lipoproteins, and lipoprotein-encapsulated drug, into cellsthrough endocytosis.33 The VLDL receptors, which area member of the LDL receptor family, are abundantlyexpressed in fatty acid–active tissues (heart, muscle, andadipose) and macrophages.34 Unlike LDL receptors, in-tracellular lipoproteins do not downregulate VLDL receptor FIGURE 2. AM plasma and heart concentrations (mg/mL) in NL expression.34,35 It has been reported that in HL plasma, there is and HL rats 12 hours after the last AM HCl doses of 25, 50, or a substantial shift of drug and metabolite mostly from the 100 mgÁkg21Ád21. *Significant difference between NL and HL lipoprotein-deficient plasma fractions to the chylomicron and VLDL fractions,36 which is in line with the high level ofVLDL receptor expression in heart.
The positive correlations (Fig. 5) noted between the total induced.31 It has been shown to increase the plasma CHOL:TG ratio and the QT interval, AM plasma, and heart concentrations of several drugs including AM after single concentrations at first glance would seem to contradict the doses,12,22,32 due to increased plasma lipoprotein binding and involvement of VLDL receptors in the heart uptake of AM, reduction in metabolism. In the rat, AM has a moderate hepatic because next to chylomicrons, VLDL possesses the lowest extraction ratio, and as such a decrease in unbound fraction CHOL:TG ratio of all lipoproteins. It must be recognized, should be expected to cause either no change or a decrease in however, that it is not VLDL itself that is taken up by cells the tissue uptake of the drug. However, as was recently through the actions of VLDL-mediated endocytosis but rather reported, in some tissues, HL caused increases in concen- VLDL remnants, also called IDL.37 The IDL particles are the trations, and notably, one of these tissues was the heart.22 This product of the action of lipoprotein lipase, which facilitates the was confirmed here in the present repeated dose study in which loss of TG from the VLDL particles. Further loss of TG from heart AM concentrations were higher in HL rats and where IDL particles causes them to become LDL particles. The ECG changes were in line with the higher tissue concen- VLDL receptors also possess lipolytic activity and further aid in the transformation of VLDL to IDL.34 Therefore, the correla- AM has been classified as a Vaughan-Williams class III tions observed between total CHOL:TG ratio versus QT interval antiarrhythmic agent. Such activity results in increases in atrial and heart concentrations are still consistent with the uptake of and ventricular refractoriness. It also depresses automaticity of AM into VLDL. In plasma, although the AM shift to VLDL is the sinoatrial node, resulting in slowing of the heart rate. The apparently greater than that to LDL fractions in HL plasma, the drug also slows conduction and increases refractoriness of the AM association to LDL is virtually identical in NL and HL atrioventricular node.14 These effects can be visualized by plasma.36 This suggests that the affinity of AM to LDL, with its 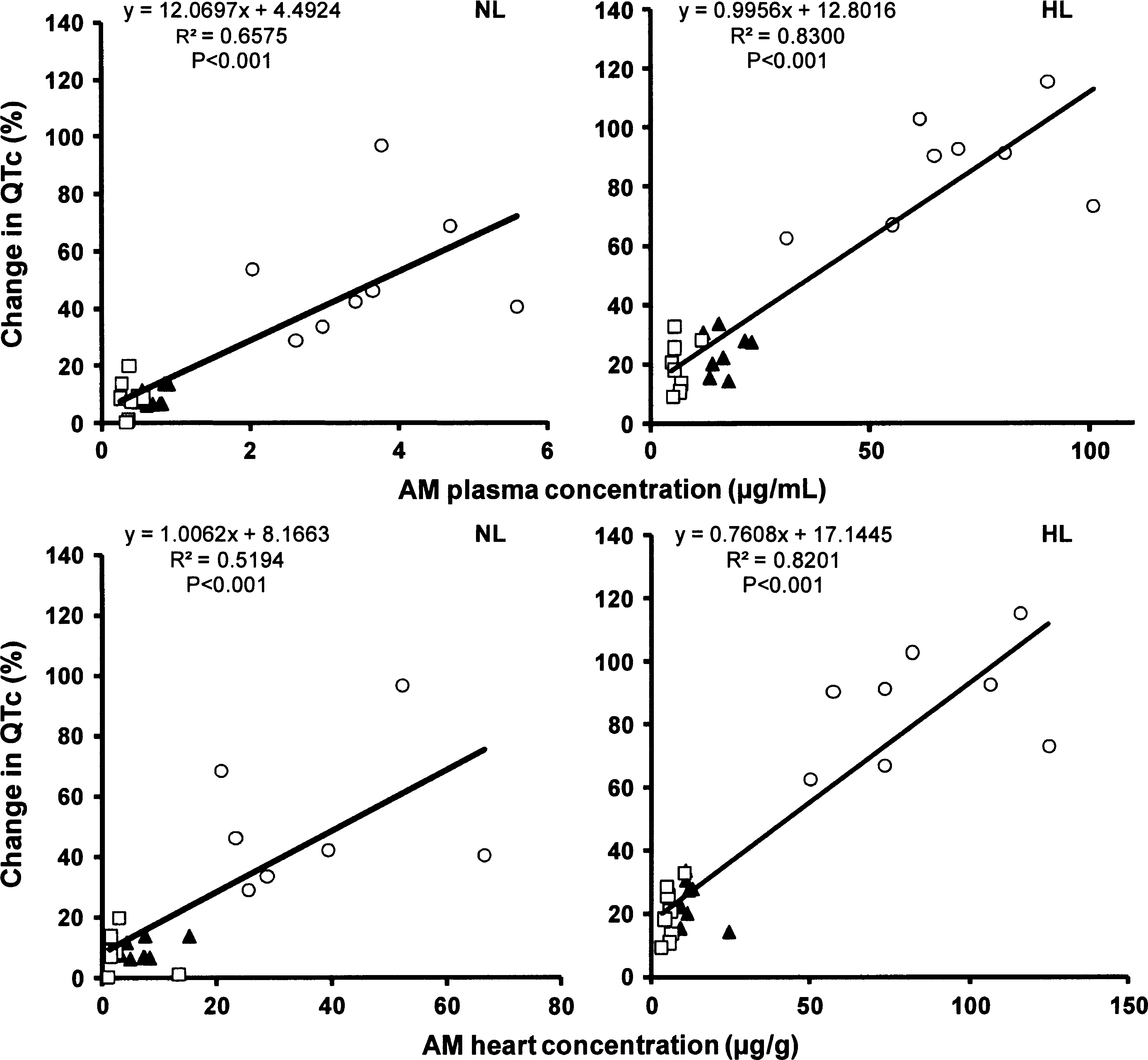 J Cardiovasc Pharmacol ä  Volume 00, Number 0, Month 2009 FIGURE 3. The correlation betweenpercent increase in QTc interval inNL and HL rats and AM plasma orheart concentrations of all drug-treated rats at the time of heartcollection. Open circles, closed tri-angles, and open squares represent100, 50, and 25 mgÁkg21Ád21 AMdose groups, respectively.
higher CHOL:TG ratio, is greater than to VLDL. Therefore, in thought to be dose dependent.38,39 Similar observations were plasma, which contains higher CHOL:TG ratios, more AM made in human where long-term AM therapy resulted in might be anticipated to be present in the LDL particles, which in turn might lead to a lower AM plasma–unbound fraction and The values of ECG parameters in saline control rats came increased total (bound + unbound) AM concentrations in in accordance with those previously published (Table 1).27 plasma, as was seen in these HL rats (Fig. 5, upper panels).
As anticipated, AM treatment resulted in PR, RR, and QTc It was apparent that the total CHOL:TG ratio was similar interval prolongations in both NL and HL rats. However, HL- between the 25 and 50 mgÁkg21Ád21 doses but higher with the treated rats showed significantly more prominent PR and QTc 100 mgÁkg21Ád21 dose (Fig. 5). This pattern was similar for prolongation than equivalently treated NL rats. This was not each of the NL and HL rats, suggesting that AM by itself may attributed to the HL condition as there was essentially no differ- be affecting the lipid profile. It was previously reported that ence in ECG parameters between NL and HL AM-untreated AM could significantly increase the CHOL and phospholipid rats (Fig. 1; Table 1). Although there was only slight difference levels without altering the TG levels in rat, an increase that was between RR interval prolongation among HL and NL AM- FIGURE 4. The correlation betweenheart and total or unbound plasmaAM concentrations in all drug-trea-ted NL and HL rats. 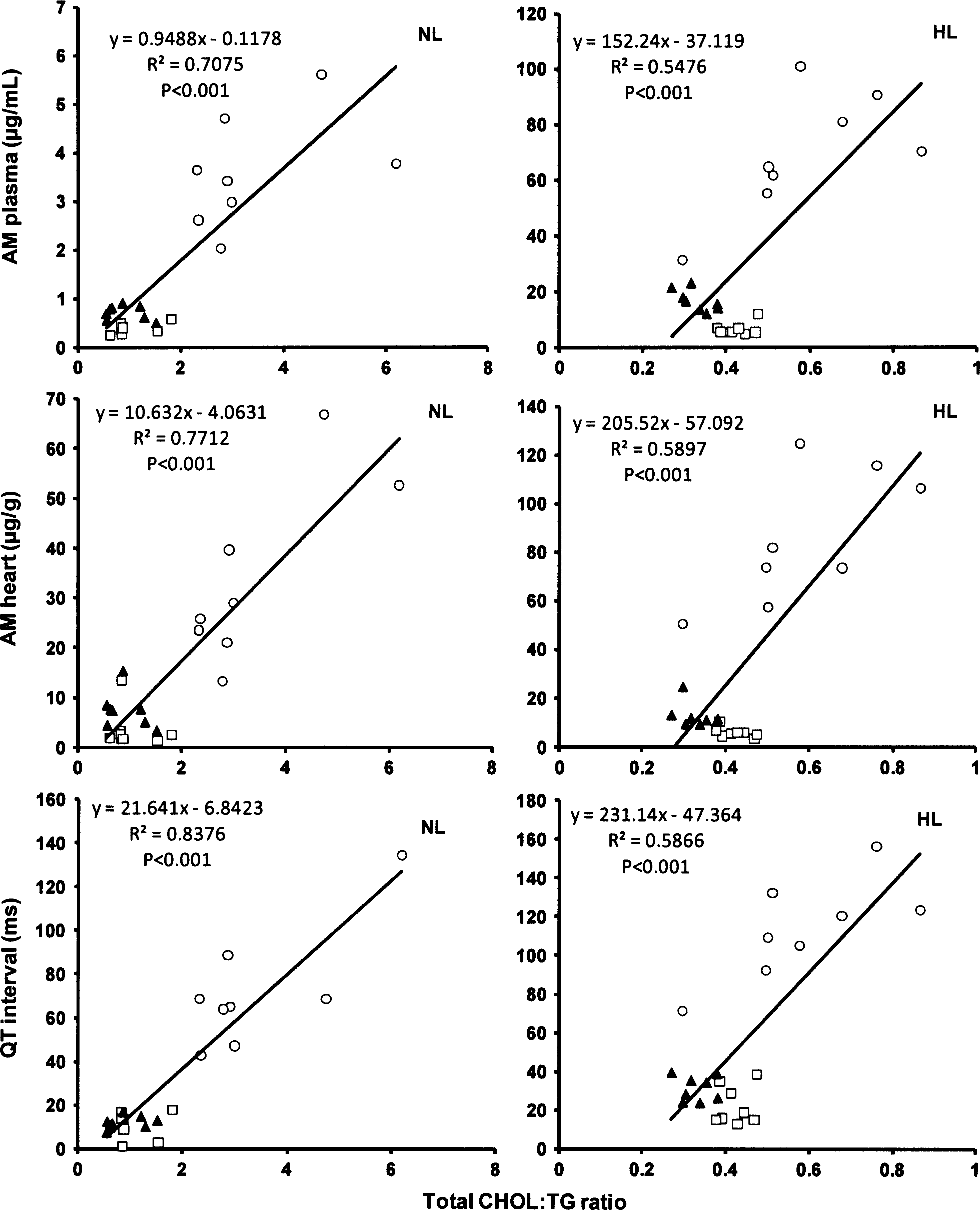 Terror medicine: birth of a discipline

JUNIOR CLASS TRIP MEETING Wednesday, April 18th Tuesday, May 1st Chaperones : 1. Important Dates & Times :  Register your cel phone on GAGGLE by May 4th .  Medication forms AND medication in the original container must be handed into the Nurse’s Office NO LATER THAN FRIDAY , May 25th.  Luggage drop-off wil be on Wednesday, May 30th from 6:00PM-