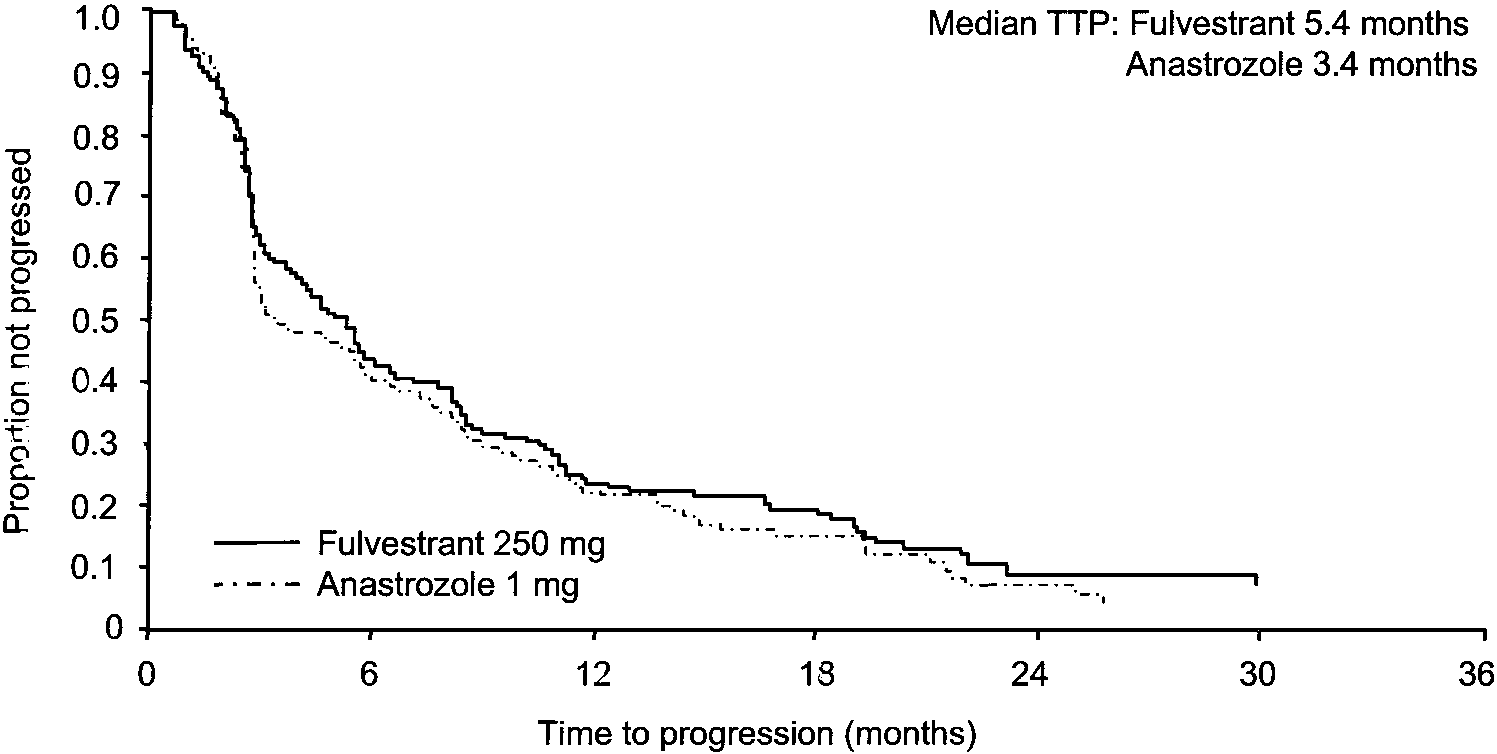 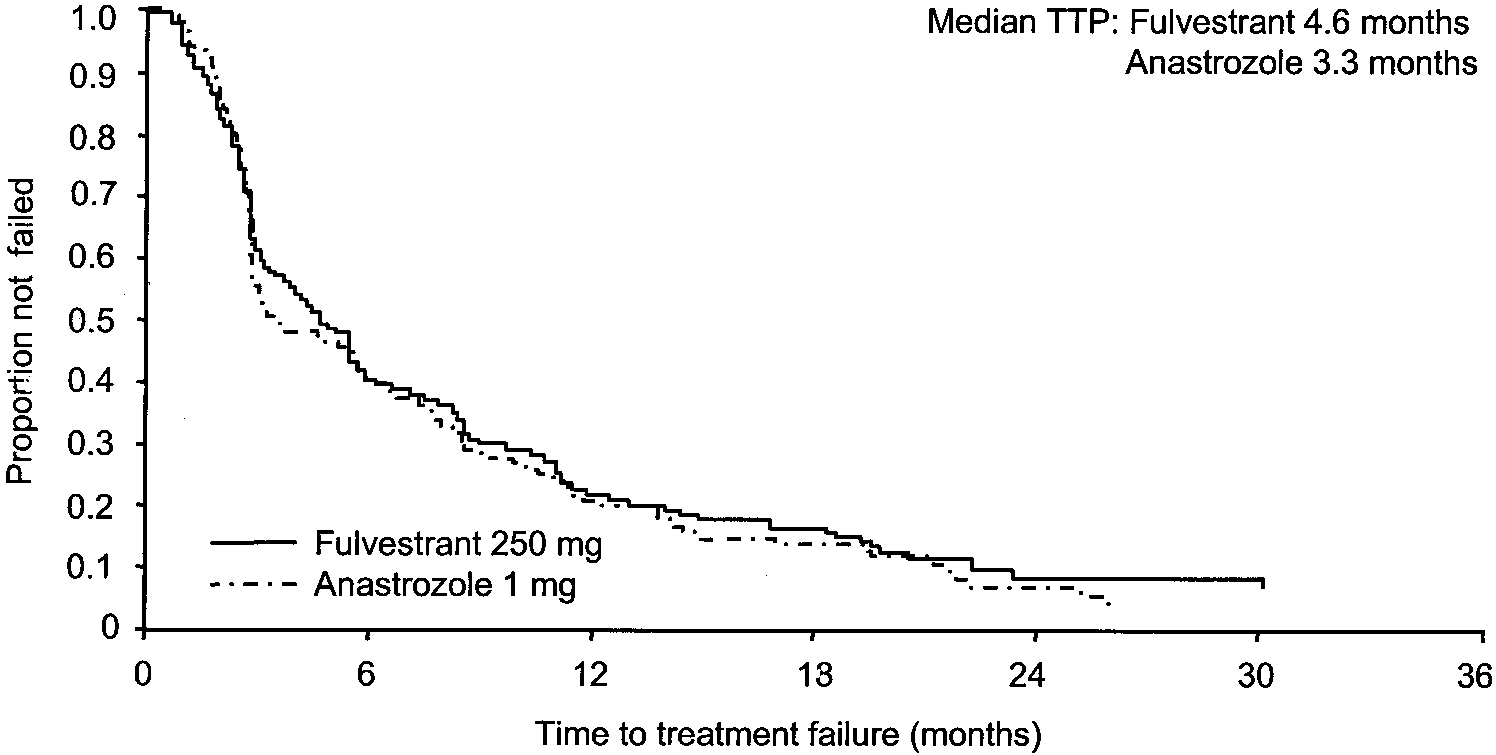 Fig 1. Kaplan-Meier estimates
for time to progression.
noninferiority of fulvestrant relative to anastrozole. The patients—where DOR was defined as from the onset of odds ratio for achieving an OR in the fulvestrant group response to disease progression for responders and zero for versus the anastrozole group was 1.01 (95.14% CI, 0.59 to nonresponders—was significantly greater for fulvestrant compared with anastrozole (ratio of average response dura- Clinical benefit rates of 42.2% and 36.1% were observed tions, 1.35; 95% CI, 1.10 to 1.67; P Ͻ .01). The Kaplan- for fulvestrant and anastrozole, respectively (Table 2), with Meier curves for DOR in all patients are shown in Fig 4.
the analysis showing no statistically significant difference The median duration of clinical benefit was 12.9 months for (difference in clinical benefit rates, 5.83%; 95% CI, fulvestrant (n ϭ 87) and 10.9 months for anastrozole (n ϭ Extended follow-up was performed in order to obtain At the time of this data analysis, a similar more complete information for DOR (median follow-up, number of deaths had occurred in each treatment group 21.3 months). The median DOR, as measured from random- (fulvestrant, n ϭ 73 [35.4%]; anastrozole, n ϭ 65 ization to progression, in those patients who responded to [33.5%]). However, as specified in the protocol, TTD treatment was 19.0 months for fulvestrant (n ϭ 36) and 10.8 (overall survival) will be analyzed when more than 50% months for anastrozole (n ϭ 34). The Kaplan-Meier curves of the patients have died. Consequently, no formal for the DOR are shown in Fig 3. In addition, DOR using all statistical analyses have been conducted on these data. In Fig 2. Kaplan-Meier estimates
for time to treatment failure. 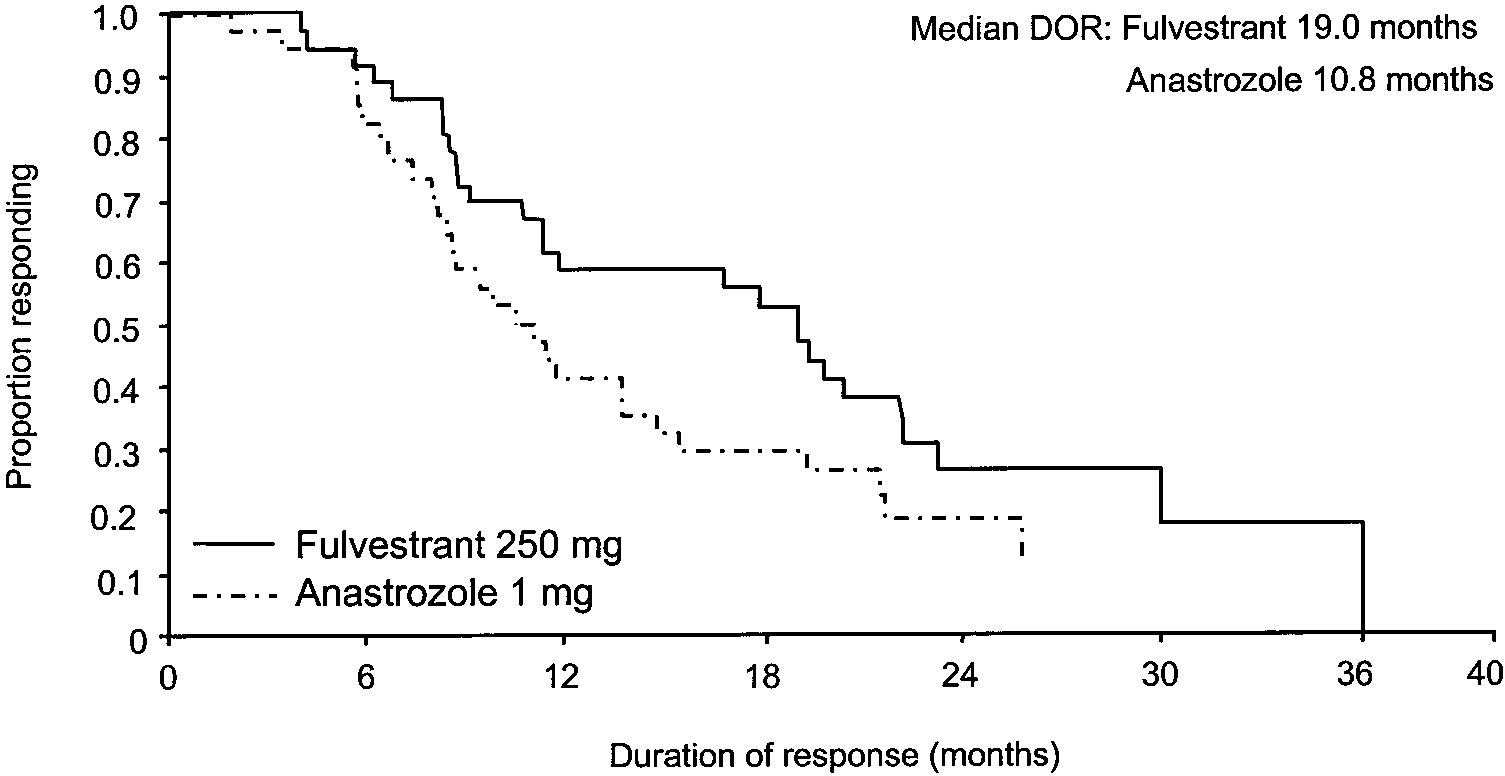 FULVESTRANT v ANASTROZOLE IN ADVANCED BREAST CANCER Table 2. Best Objective Responses for Fulvestrant 250 mg IM or
were generally similar between treatment groups. The Anastrozole 1 mg Orally od
most common drug-related AEs are shown in Table 4.
The incidence of hot flashes was similar for both drugs (23.5% for fulvestrant and 24.9% for anastrozole).
The incidence of weight gain (fulvestrant v anastrozole: 1.5% v 1.6%), vaginitis (3.4% v2.6%), and thromboem- bolic disease (3.4% v 6.7%) was low for both fulvestrant and anastrozole. Joint disorders (including arthritis, arthralgia, and arthrosis) were reported by 9.3% and 13.5% of patients in the fulvestrant and anastrozole total 6,908 monthly injections: 3,752 injections in the fulvestrant group and 3,156 placebo injections in the anas- Abbreviations: CR, complete response; PR, partial response; SD, stable trozole group. Fifty-five patients (27.0%) receiving fulves- trant and 45 patients (23.3%) receiving anastrozole (plusplacebo injection) reported injection site reactions. Overall, line with the study protocol, TTD analyses will be 86 fulvestrant courses (4.6%) of the total of 1,879 and 71 placebo courses (4.4%) of the total of 1,624 resulted in aninjection site event. Most of these events were charac- terized as injection site pain, reaction, and/or inflamma- Both fulvestrant and anastrozole were well tolerated, tion. None of these events was serious, and only one with only five fulvestrant patients (2.5%) and five anas- patient complained of severe injection site pain and trozole patients (2.6%) withdrawing because of AEs. The requested to be withdrawn from fulvestrant treatment (the profile of AEs (thought to be drug-related or not) was investigator did not consider the event to be drug similar for the two drugs, and patients in both treatment related). Two anastrozole-treated patients given placebo groups reported a wide range of AEs. The most fre- injections were also withdrawn because of AEs related to quently reported AEs, graded according to Coding Sym- (COSTART) classification, are shown in Table 3 andincluded asthenia, nausea, pain, headache, vasodilatation, A graph of the mean TOI (Ϯ standard deviation) over pharyngitis, dyspnea, back pain, bone pain, and vomiting.
time is shown in Fig 6. The analysis of QOL data up to the The incidence and severity (most were mild) of events date of progression showed that QOL was maintained over 3. Kaplan-Meier
mates for duration of response. 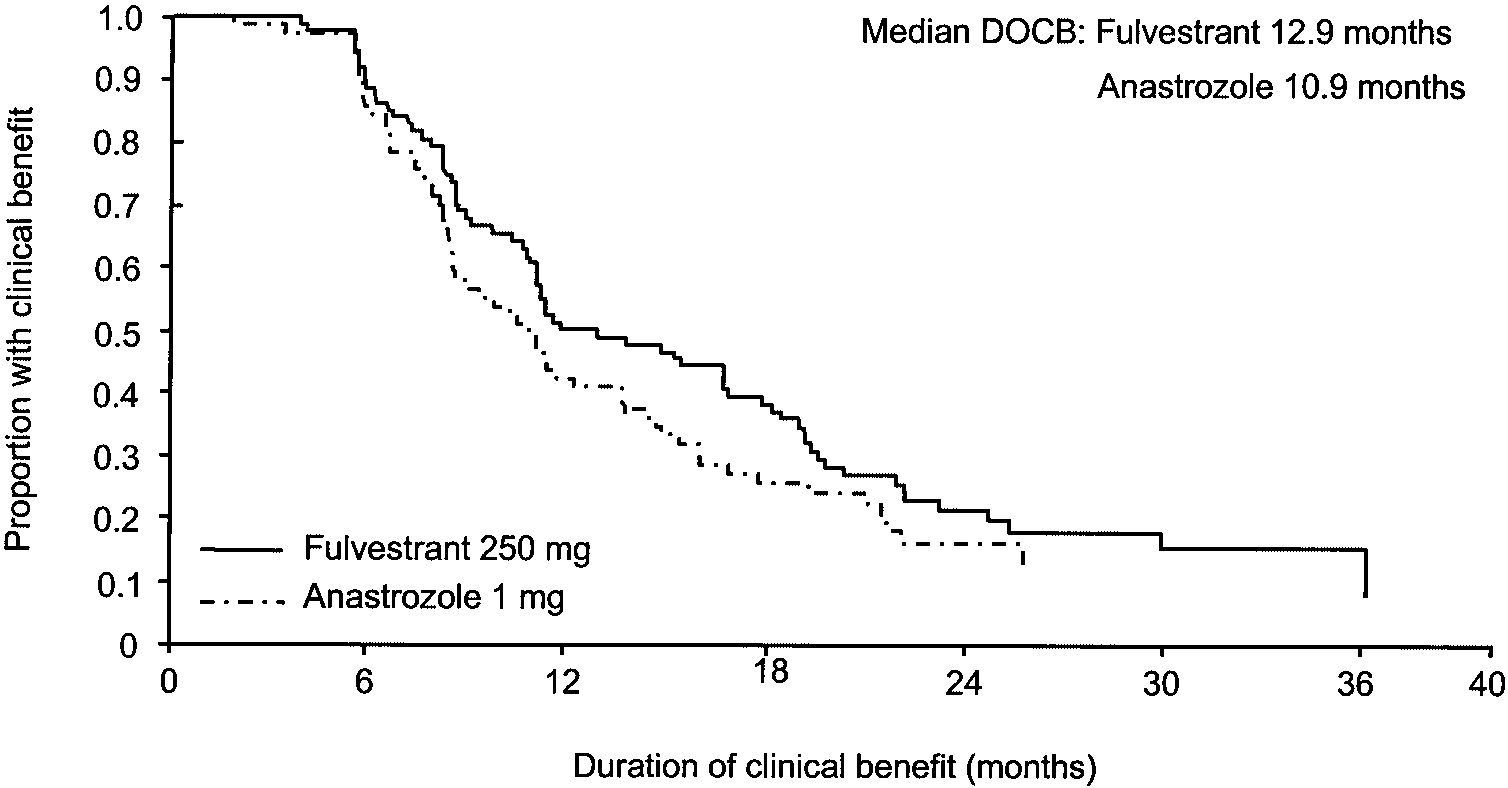 4. Kaplan-Meier
mates for duration of response
(all patients).
time and that the two treatments were not statistically significantly greater in the fulvestrant group than in the anastrozole group. The clinically durable response observedwith fulvestrant is in accordance with preclinical observa- tions in tumor models, where fulvestrant was shown to This North American, randomized, double-blind, double- double the DOR compared with tamoxifen or withdrawal of dummy, phase III study in postmenopausal women with estrogen,6 as well as with phase II clinical data,10 where advanced breast cancer was designed to compare the effi- long responses were observed in tamoxifen-resistant, ad- cacy and tolerability of fulvestrant with that of the well- vanced breast cancer patients. Furthermore, in the clinical established third-generation aromatase inhibitor anastro- benefit group, where patient numbers were higher, the zole. Although the results did not show superiority of duration of clinical benefit also favored fulvestrant. With fulvestrant over anastrozole, the primary analysis of TTP respect to other end points of the study, fulvestrant showed showed fulvestrant to be at least as effective as anastrozole.
a numerical improvement in TTP (median, 5.4 months) and The CIs observed for TTP, TTF, and OR for the two TTF (median, 4.6 months) compared with anastrozole hormone agents allow us to rule out inferiority of fulvestrant (median, 3.4 and 3.3 months, respectively), although the to anastrozole. Furthermore, DOR using all patients was analyses of TTP and TTF showed no statistically significant 5. Kaplan-Meier
mates for duration of clinical
benefit (DOCB).
FULVESTRANT v ANASTROZOLE IN ADVANCED BREAST CANCER differences. OR was identical in the fulvestrant and anastrozole tively protocoled for the combined data from this North groups (17.5%). A greater number of patients in the fulvestrant American trial 0021 and the multinational trial 0020.
group achieved long-term SD, giving a slightly higher clinical These results will be presented separately; therefore, the benefit rate (42.2% for fulvestrant v 36.1% for anastrozole), comparative tolerability of fulvestrant and anastrozole in although the analysis of clinical benefit rate showed no the present study is not discussed further.
statistically significant difference. Thus, trends for all major With regard to the route of administration, fulvestrant end points favored fulvestrant. Reassuringly, the summary data was well tolerated, with only one patient withdrawing from of QOL showed that the use of fulvestrant in this patient treatment because of an injection site reaction. The data population maintained QOL as well as anastrozole did. It is from the placebo treatment in the anastrozole arm provided premature to perform survival analyses, which by protocol confirmation that injection site reactions to fulvestrant are design require that more than 50% of patients have died. Given related to the injection itself (or the excipients used to carry the results to date and the multiple additional therapies given fulvestrant) and not to the local effects of fulvestrant itself.
after progression in such patients, it seems highly unlikely that Injection site reactions were also few in the companion patients randomized to fulvestrant would have worse overall multinational study, in which patients received a larger survival. The double-dummy design provided the opportunity single 5-mL injection. A potential advantage of the paren- to determine more thoroughly the toxicity profile of fulves- teral injection is that compliance, which can be a problem trant. In this trial, fulvestrant and anastrozole were both very (particularly in elderly patients), can be assured.
well tolerated, with the AE profile for fulvestrant being similar This study confirms that an antiestrogen with a dominant to that of anastrozole. Similar numbers of AEs were observed estrogen antagonist profile and unique mechanism of action in both treatment arms, with the majority being mild. Most can induce long remissions in tumors with acquired resistance importantly, a low percentage of patients in each group to tamoxifen, a SERM with mixed agonist/antagonist proper- withdrew because of AEs (2.5% with fulvestrant v 2.6% ties. This lack of cross-resistance between tamoxifen and with anastrozole). Many of the AEs in both groups could fulvestrant has not been observed clinically with other anties- have been related more to the serious underlying and trogens. Raloxifene was found to be ineffective in metastatic progressive disease or to concomitant therapy (eg, opi- breast cancer patients who were refractory to tamoxifen.14,15 ates for pain). Statistical analysis of AEs was prospec- Multiple phase II metastatic breast cancer trials investigatingtoremifene in tamoxifen-refractory patients also demonstratedcross-resistance to tamoxifen.16,17 Clearly, the fact that fulves- Table 3. Most Common Adverse Effects Occurring in > 10% of Patients
trant is effective in women progressing after prior tamoxifen therapy emphasizes that it has a mode of action distinct from that of tamoxifen and the other SERMs.
The results of trial 0021 are similar to those found in the another multinational trial (0020), also published in this of the Journal.11 The difference in DOR between fulvestrant and anastrozole, as measured from randomization to pro- gression, in those patients who responded to treatment was greater in trial 0021 compared with trial 0020. However, the Table 4. Drug-Related Adverse Events Occurring in > 3% of Patients in
Either Group (excluding injection site reactions) 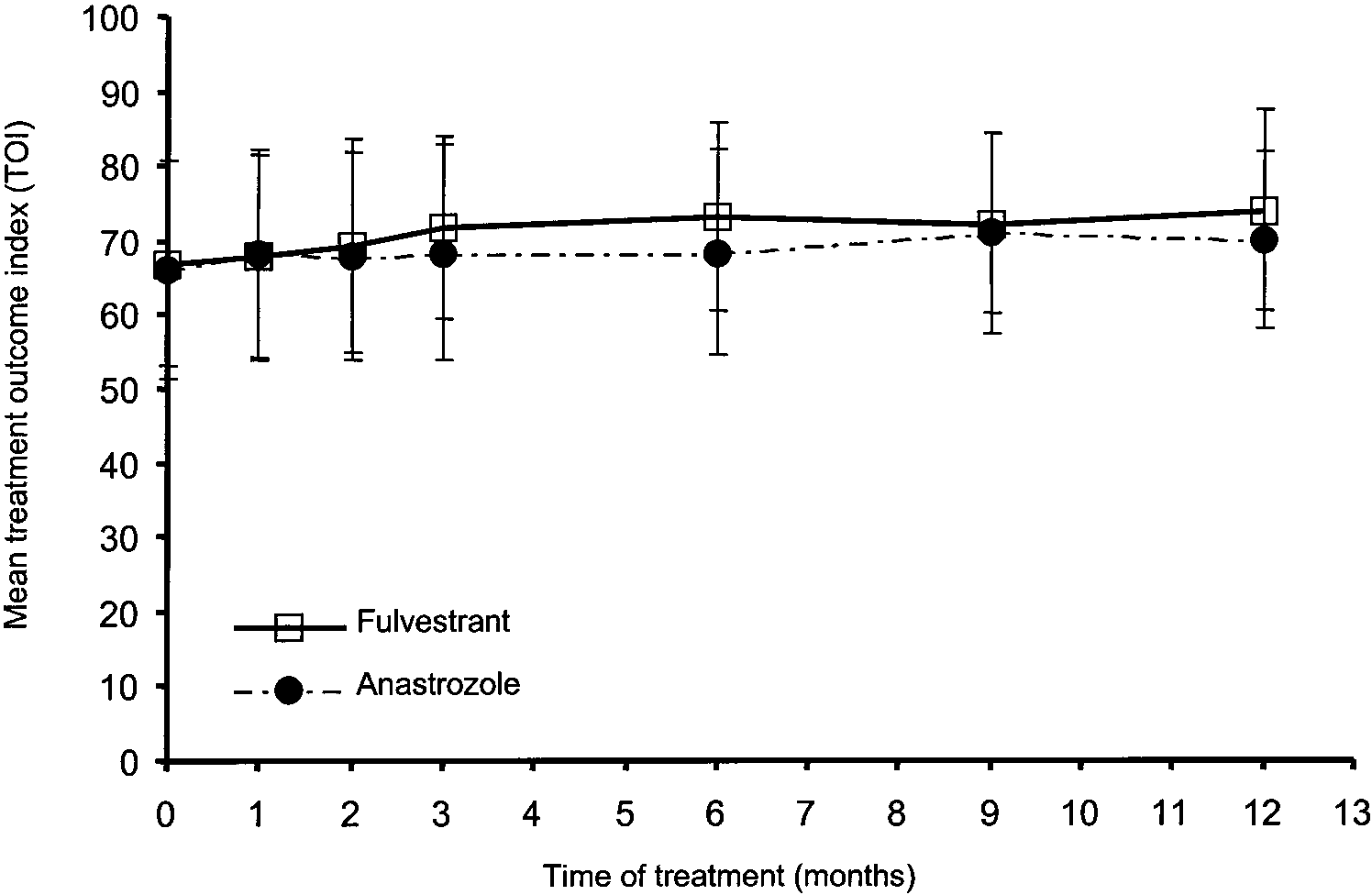