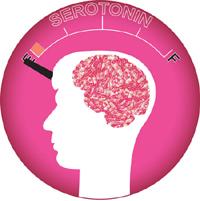 Public release date: 7-Nov-2005 Contact: Paul Ocampo [email protected] 415-624-1224 Public Library of Science Ads for SSRI antidepressants are misleading, say researchers Consumer ads for a class of antidepressants called SSRIs often claim that depression is due to a chemical imbalance in the brain, and that SSRIs correct this imbalance, but these claims are not supported by scientific evidence, say researchers in PLoS Medicine. Although scientists in the 1960s suggested that depression may be linked to low brain levels of the chemical serotonin (the so-called "serotonin hypothesis"), contemporary research has failed to Illustration: Margaret Shear, Public Library of Science The researchers--Jeffrey Lacasse, a doctoral candidate Click here for a high resolution at Florida State University and Dr. Jonathan Leo, a neuroanatomy professor at Lake Erie College of Osteopathic Medicine--studied US consumer advertisements for SSRIs from print, television, and the Internet. They found widespread claims that SSRIs restore the serotonin balance of the brain. "Yet there is no such thing as a scientifically established correct 'balance' of serotonin," the authors say. According to Lacasse and Leo, in the scientific literature it is openly admitted that the serotonin hypothesis remains unconfirmed and that there is "a growing body of medical literature casting doubt on the serotonin hypothesis," which is not reflected in the consumer ads. For instance, the widely televised animated Zoloft (setraline) commercials have dramatized a serotonin imbalance and stated, "Prescription Zoloft works to correct this imbalance." Advertisements for other SSRIs, such as Prozac (fluoxetine), Paxil (paroxetine), and Lexapro (escitalopram), have made similar claims. In the US, the FDA is responsible for regulating consumer advertisements, and requires that they be based on scientific evidence. Yet, according to Lacasse and Leo, the mismatch between the scientific literature and the SSRI advertisements is "remarkable, and possibly unparalleled." And while the Irish equivalent of the FDA, the Irish Medicines Board, recently banned GlaxoSmithKline from claiming in their patient information leaflets that paroxetine (Paxil) corrects a chemical imbalance, the FDA has never taken any similar action on this issue. Commenting on Lacasse and Leo's work, Professor David Healy of the North Wales Department of Psychological Medicine, said: "The serotonin theory of depression is comparable to the masturbatory theory of insanity. Both have been depletion theories, both have survived in spite of the evidence, both contain an implicit message as to what people ought to do. In the case of these myths, the key question is whose interests are being served by a widespread promulgation of such views rather than how do we test this theory." Dr Joanna Moncrieff, Senior Lecturer in Psychiatry at University College London, said: "It is high time that it was stated clearly that the serotonin imbalance theory of depression is not supported by the scientific evidence or by expert opinion. Through misleading publicity the pharmaceutical industry has helped to ensure that most of the general public is unaware of this." Citation: Lacasse JR, Leo J (2005) Serotonin and depression: A disconnect between the advertisements and the scientific literature. PLoS Med 2(12): e392. CONTACTS: Jeffrey Lacasse [email protected] (850) 294-0875 Jonathan Leo [email protected] 941-321-9034 or 941-723-8710 PLEASE MENTION THE OPEN-ACCESS JOURNAL PLoS MEDICINE (http://www.plosmedicine.org/) AS THE SOURCE FOR THIS ARTICLE AND PROVIDE A LINK TO THE FREELY-AVAILABLE TEXT. THANK YOU. All works published in PLoS Medicine are open access. Everything is immediately available without cost to anyone, anywhere--to read, download, redistribute, include in databases, and otherwise use--subject only to the condition that the original authorship is properly attributed. Copyright is retained by the authors. The Public Library of Science uses the Creative Commons Attribution License. About PLoS Medicine PLoS Medicine is an open access, freely available international medical journal. It publishes original research that enhances our understanding of human health and disease, together with commentary and analysis of important global health issues. For more information, visit http://www.plosmedicine.org/ About the Public Library of Science The Public Library of Science (PLoS) is a non-profit organization of scientists and physicians committed to making the world's scientific and medical literature a freely available public resource. For more information, visit http://www.plos.org/

Bug Bites, Spider Bites and Tick Bites Bug bites and stings usually are just nuisances. They bring momentary alarm, temporary discomfort and pain, but no serious or lasting health problems. But on occasion, they can cause infections that require treatment and allergic reactions Parents should know the signs of an infection or allergic reaction, and when to get medical attention. Inform a