CONSERVATIVE TREATMENT OF A FEMALE COLLEGIATEVOLLEYBALL PLAYER WITH COSTOCHONDRITIS Donald Aspegren, DC,a Tom Hyde, DC,b and Matt Miller, MDc Objective: This study was conducted to discuss the conservative care used to treat a female collegiate volleyball playerwith acute costochondritis.
Clinical Features: A 21-year-old collegiate volleyball player had right anterior chest pain and midthoracic stiffness of8 months duration.
Intervention and Outcome: High-velocity, low-amplitude manipulation was performed to the associatedhypokinetic costovertebral, costotransverse, and intervertebral zygapophyseal thoracic joints. Instrument-assisted softtissue mobilization was performed by using the Graston technique. Pain levels improved on numeric pain scale, as didfunctional status identified on Dallas Pain Questionnaire and Functional Rating Index.
Conclusion: This athlete seemed to respond positively to manipulation, soft tissue mobilization, and taping.
(J Manipulative Physiol Ther 2007;30:321-325) Key Indexing Terms: Manipulation; Spinal; Athletic Injuries; Tietze’s Syndrome; Chiropractic The participation of women in sports has steadily therapeuticapproaccture, mentation of Title IX.As participation increases, so does physical stress placed on the musculoskeletal system medications such as sulfasalazine.15 Symptoms may persist of the female athlete. Chest wall pain is a common symptom for several months to several years but most commonly in athletes. Costochondritis typically presents as pain on the anterior chest wall of the costochondral or nal joints.
We present a case study of a female collegiate volleyball This condition is more common in associated player with acute pain of the right fifth costocartilage, right with physical stresses experienced in athleticon- second through fifth chondrosternal joints, and stiffness of dritis is typically a benign and self-limiting condition.
the midthoracic region. A literature search of the Ovid and PubMed indices was performed. We present what we ichia coli infecthe cartilage,intraabuse, believe is the first published case of a collegiate volleyball player with costochondritis managed conservatively. Treat- to be an associated cause of symptoms.
ment included high-velocity, low-amplitude (HVLA) As soon as serious causes of anterior chest pain, such as manipulation, Graston technique (GT), and Kinesio taping methods. The purpose of the article was to report the diagnosis of a benign etiology of costochondritis has been conservative treatment of costochondritis in a female made, the management begins. The most commonly used Private Practice, Director, Lakewood Spine and Sports Center, A 21-year-old collegiate volleyball player presented with b Private Practice, North Miami Beach, FL.
right anterior chest pain and midthoracic stiffness that had c Private Practice, Director, Mile Hi Occupational Medicine.
been present for 8 months. She played year-round in the No funding was received in the preparation of this paper.
United States and Europe and had begun this vigorous level Submit requests for reprints to: Donald Aspegren, DC, 11220 W.
of activity in high school. The anterior chest pain was constant and described by the patent as a sharp ache that Paper submitted July 31, 2006; in revised form January 1, 2007; worsened with volleyball and weightlifting. The weightlift- ing activities that exacerbated her pain were bench presses, bent flies, and power cleans. The patient denied respiratory or Copyright D 2007 by National University of Health Sciences.
doi:10.1016/j.jmpt.2007.03.003 cardiac problems, and the onset of chest pain was reported to 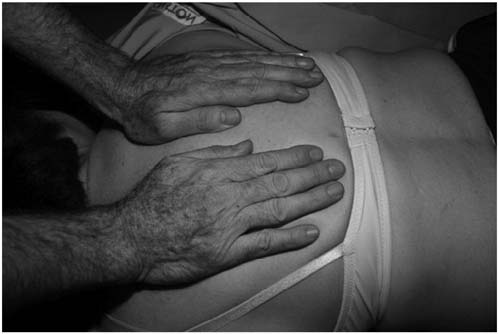 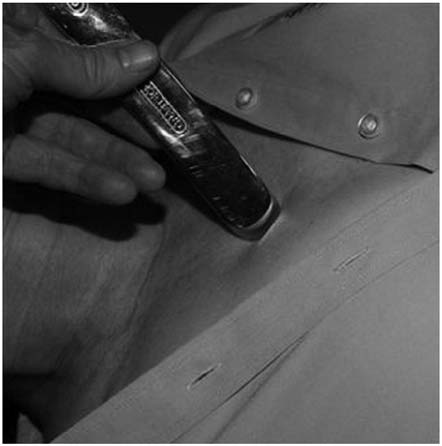 Journal of Manipulative and Physiological Therapeutics Fig 1. High-velocity, low-amplitude manipulation being applied tothoracic region.
be insidious. Her quality of play had been adversely affectedbecause of the pain. The pain made it difficult for her to focus Fig 2. Application of GT to costocartilage.
in the classroom and obtain restful sleep. When pain levelsincreased during play, it became difficult to bdigQ and bspikeQ range of motion was within normal limits, but elevating the balls. She had no prior treatments for this problem.
right arm through the range of motion reproduced symp- She marked her Numeric Pain Scale at a 7 on a 10-point toms in the chondrosternal and costocartilage areas and, to a scale. A Dallas Pain Questionnaire strated lesser degree, in the dorsal region. Motion palpation moderate pain levels with activities, with highest pain levels revealed dysfunctional motion from the fifth through ninth noted during lifting and movements experienced during costovertebral, costotransverse joints, and intervertebral practicing and playing volleyball. The DPQ is a 16-item segments. A bimanual spring test of the ribs yielded visual analog tool developed for the purpose of evaluating a patient’s cognition of how chronic pain affects 4 aspects of A diagnostic ultrasound study was previously ordered by their lives. These 4 categories are as follows: (1) daily her primary care physician and offered an impression of activities, including pain and intensity, personal care, lifting, benign nodules in the rib region. Results of a plain film chest walking, sitting, standing, and sleeping; (2) work and radiograph were normal. A 3-phase bone scan ordered by the leisure, including social life, traveling, and vocational; (3) consulting orthopedic surgeon showed negative results.
anxiety-depression, including social life, traveling, and The patient expressed a desire to avoid medications and/ vocational; (4) social interest, which include interpersonal or injection therapy. Consequently, we approached the case relationships, social support, and punishing responses.
using HVLA manipulation to the hypokinetic costoverte- Initial DPQ scores were 60 for daily activities, 70 for bral, costotransverse joints, tervertebral thoracic work/leisure, 10 for anxiety/depression, and 0 for social zygapophyseal (facet) joints (Audible cavitations, activities. A Functional Rating Index (Ffound the as described by Ross et could be heard when patient reporting severe pain, with greatly disturbed sleep, performing manipulation to the involved spinal segments.
and the ability to perform only 25% of her regular work/ Instrument-assisted soft tissue mobilization incorporating sport activities. The FRI is a self-reporting instrument GT was gently applied to the chondrosternal joint and fifth consisting of 10 items, each with 5 possible responses that costochondral segmenKinesio tape was applied in express graduating levels of disability. Regarding clinical 2 strips. First, a vertical strip (an I strip) was applied over the use of the FRI tool, the average time required to complete it chondrosternal joints, and a second I strip was placed is 78 seconds. A higher score suggests more pain and a horizontally over the fifth costo). The patient reduction in functional levels. Her initial FRI score was 22.
was initially treated twice a week for 2 weeks. After 2 weeks, Acute pain was noted upon palpation and deep inspira- she reported a subjective improvement in pain of b70%.Q tion at the right fifth rib chondosternal joint and the Sport participation was allowed to continue; however, costochondral segment. Palpation tenderness in this region weightlifting was initially suspended and reintroduced after was graded 3 on a 4-point scale as per standforth by several weeks. Pain stopped during volleyball play and American College of Rheumatology in 1sternal decreased during nonparticipation periods.
compression test was acutely positive and at both High-velocity, low-amplitude spinal manipulation, GT, the chondrosternal and costocartilage regior and Kinesio taping were performed on a weekly basis 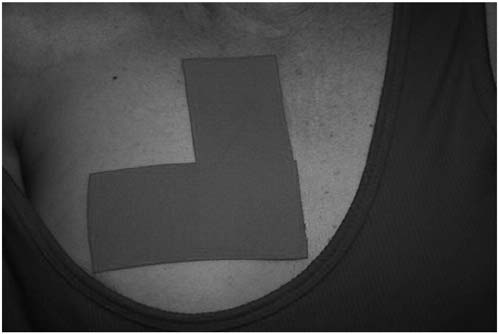 Journal of Manipulative and Physiological Therapeutics we present, a significant history of breast cancer was in thefamily and of concern to this student-athlete.
Physical examination findings for costochondritis typi- cally include anterior chest wall tenderness that is localized tothe costochondral junction of 1 oribs, but does notinclude swelling, heat, or erythThe second throughfifth costal cartilage areas are most commonly involved.
Associated restriction of corresponding costovertebral andcostotransverse joints may be discovered on joint playassesssuch as by motion palpaMotionpalpation is a manual process of moving a joint into itsmaximal end range of motion, after which it is challengedwith a light springing movement. This end point of jointmovement forms the basis for determination of a normal orabnormal joint play. motion of the joint is considered Fig 3. Kinesio taping over chondral-sternal joints and costocar- fixated or hypokinetic.Hypokinetic motion of the second and fifth costovertebral, costotransverse, and facet joints wasdetected in our patient. The loss of normal spinal movement during the spring workouts to control pain and improve and associated chest pain was recently described by Yell- function of the previously described thoracic joints. We used observed thoracic intervertebral dysfunction by 2 in Kinesio tape strips o tension or stretch applied to using active movement and applying an intersegmental the tape during The patient was treated a total overpressure to the zygapophyseal joints. An examiner who of 16 times. Pain scores at the end of treatment included an was blinded to pertinent details identified intervertebral FRI score of 5; her FRI score on initial presentation was 22.
dysfunction in only 25% of controls, whereas 79% of patients Her Numeric Pain Scale score improved to 0.25 from a with thoracic and associated chest pain were identified as previous score of 7. Her DPQ improved; daily activities having alterations in spinal intersegmental motion.
reduced from 60 to 6, work/leisure reduced from 70 to 10, Plain film radiography is normally used in costochon- anxiety/depression reduced from 10 to 0, social activities dritis, mild soft tissue swelling may be present.
remained the same at 0. The athlete was able to continue Ontell et cribe radiographic and computerized participating as a volleyball player and fulfilled her athletic tomography scan features of costochondritis that may commitments to the university and her goals as a student- include chondral enlargement or destruction, low attenuation athlete. An extended treatment plan included care as needed of the costal cartilage (observed on computerized tomog- for control of any increased symptoms and a 60-day rest raphy), and soft tissue swelling. Three-phase bone scan may period from play and weightlifting during the summer. Six offer a a costochondral junction that may be months after discharge from care, the patient required no asymptoming for the presented volleyball player did not yield remarkable results. Most studies fail to describelaboratory findings; however, Disla et ed elevatedsedimentation rates in patients with costocondritis. Our patient’s sedimentation rate was normal with no abnormal- Costochondritis is 1 of several chest wall conditions ities found in the complete blood count or differential.
commonly present to the emergency department. Disla et The main theraapproaches involved in our case reported that of the 122 consecutive patients presenting to an reassurance,HVLA manipulation of costoverte- emergency department with anterior chest wall pain, 36 (30%) had costochondritis. Of the 36, women accounted for (facet) directly to the costal cartilage, those diagnosed with costochondritis. Brown and and Kinesio tapingthe fifth costal cartilage and along 137 adolescents presenting with chest pain and the third through sixth chondrosternal joints. The subject’s found that 82% were afraid their pain was cardiac in origin.
weightlifting workouts were altered, excluding bench Of those who were concerned that a heart ailment was pressing and flies. We allowed the athlete to continue present, 29% continued to worry even after the diagnosis of Rumball et ly described the mechanisms of tively analyzed 100 adolescents with chest pain and found rowing as a mechanical factor leading to the development of that 56% believed their chest pain was due to a heart costochondritis. They believe inflammation in the costo- pathology. These authors further discuss that adolescents chondral region is most likely caused by an increase in begin to perceive themselves as adults, consequently viewing pulling from adjoining muscles to the rib or a dysfunction at themselves as vulnerable to adult diseases. In the case study the costotransverse joint of the involved rib. In the

Medical data is for informational purposes only. You should always consult your family physician, or one of our referral physicians prior to treatment . arterial circulation disorders, colitis, gum diseases, and assortedchildren's diseases. The First International Conference of Bio-oxidative Medicinewas held February 17-19, 1989 in Dallas/Ft. Worth, TX. Physicianspresented papers on the effi