Most Commercial soaps are made by mixing the “base” soap with variety of synthetic compounds - not
unlike those used in powder/liquid laundry detergents.
Base soap is the result of a chemical reaction known as saponification - when an alkaline is mixed with a fatty
acid in the presence of water: Water + Alkaline + Fatty Acid = Base Soap + Glycerin
Most commercial soaps are prepared in the following three steps:
Animal fat, primarily cattle fat, (also known as tallow, the inexpensive byproduct of slaughter houses) is
first boiled and then mixed with water and alkaline (almost always lye, NaOH) to produce the “base” Glycerin is removed and sold for use in the more lucrative cosmetic industry. Glycerin is
widely used in cosmetics as a means of improving smoothness and moisturizing properties because it can draw moisture up through skin layers to slow or prevent its excessive drying or Synthetic compounds are added (perfumes, colors, sudsing & sequestering agents similar to those used in
laundry detergents) to the base soap to enhance marketability and help differentiate the product
among many. After vacuum drying, cooling and solidifying, the soap mass is milled or crushed in stages and, with the addition of synthetic lubricants, extruded into bars and pressed into its
Did you know?
14 of the 20 listed ingredients of the Dove - Go Fresh Cool Moisture Beauty Bar are synthetic compounds
similar to those used in laundry detergents: 1.Sodium Lauroyl Isethionate , 2.Sodium Stearate, 3.Sodium Isethionate, 4.Lauric Acid, 5.Sodium C14-C16 Olefin Sulfonate, 6.Fragrance, 7.Sodium Sulfate, 8.Sodium Chloride, 9.Dipropylene Glycol, 10.Tetrasodium EDTA, 11.Tetrasodium Etidronate, 12.Blue 1, 13.Titanium Dioxide, 14.Yellow 5. The entire ingredients and their use are listed in the Glossary of Ingredients below – it’s not a pleasant surprise.

Traditional soaps are typically made from a wide range of natural oils – as opposed to animal fat used in
commercial soap - such as canola oil (good) or olive oil (best). Instead of removing the glycerin from soap,
soapmakers sometimes add “superfatting” agents such as apricot kernel oil, cocoa butter, or coconut oil to help
augment glycerin’s capability in retaining skin’s moisture, resulting in a softer and supple skin. Most soapmakers don’t like to add scent and color to their soap. Adding color is particularly difficult because of the highly alkaline conditions of soapmaking. To reach a wider market, traditional soaps are becoming available in a variety of scents however, mostly by adding the essential oil of fragrant plants – typically extracted by the distillation process from local flowers and plants. Most soapmakers use one of the following two methods: (a) Cold Process has become the dominant method of traditional soapmaking primarily because of
commercial availability of lye. One disadvantage of this method, however, is that because it is difficult to achieve complete saponification, excess amount of oil may become rancid and appear as brown spots on the soap. On the other hand, avoiding the problem by adding extra alkali to the mix results in a harsh soap. For that reason, cold process soapmaking requires very accurate measurements. 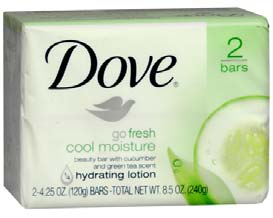 (b) Hot Process is typically used by the most traditional soapmakers. In this method, oil is boiled in
large kettles before the lye/water mixture is added to it and stirred constantly. As the lye works to saponify the oil, the liquid will become stringy and muddy-looking before it turns uniformly into a clear mixture of soap and glycerin. After about six to eight hours, when the froth no longer rises and large white bubbles pop on the surface, the soap is removed. It is possible to make hard soap from this jel y by further boiling and adding fillers such as common salt to it. When cooled, it can be poured into mould, cut into bars, and allowed to cure for several weeks into a hard bar.


Dove – Go Fresh Cool Moisture Beauty Bar with Cucumber & Green Tea Scent
1.Sodium Lauroyl Isethionate, 2.Stearic Acid, 3&4.Sodium Tallowate or Sodium Palmitate, 5.Sodium Stearate, 6.Water, 7.Sodium Isethionate, 8.Lauric Acid, 9.Sodium C14-C16 Olefin Sulfonate, 10&11.Sodium Cocoate or Sodium Palm Kernelate, 12.Fragrance, 13.Sodium Sulfate, 14.Sodium Chloride, 15.Dipropylene Glycol, 16.Tetrasodium EDTA, 17.Tetrasodium Etidronate, 18.Blue 1, 19.Titanium Dioxide, 20.Yellow 5 The ingredients listed above, are rearranged under the following three groups: Group I: These are necessary for making a “base” soap – soap before color, scent, and other synthetic and
enhancing ingredients are added.
Water: is one of the 3 necessary elements for the saponification process (Water + Alkaline + Fatty Acid =
Soap + Glycerin)
Stearic Acid : A fatty acid that occurs in many animal fats and vegetable oils, but is more common in
animal fat than vegetable oil. It is prepared by treating animal fat with water at a high pressure and
temperature. It can also be obtained from the hydrogenation of some unsaturated vegetable oils.
Sodium Tallowate or Sodium Palmitate: Sodium Tallowate is made from sodium hydroxide (also
known as lye), steam, and animal tallow (animal fat, typically cattle fat). Sodium Palmitate’s kernelate is a
product of the saponification of palm kernel oil with sodium hydroxide.
Sodium Cocoate or Sodium Palm Kernelate: Sodium Cocoate is a mixture of acid salts of coconut
oil and is produced by hydrolysis of the coconut oil with lye and used as a surfactant. Sodium Palm
Kernelate is a product of the saponification of palm kernel oil with lye. Note: The base soap (soap before scent, color and synthetics are added) used in most commercial soaps use a mix of sodium palmate, sodium cocoate and sodium tallow in various combinations. Group II: These are the enhancing ingredients – they are not necessary for the cleaning purpose and are
typically used to increase lather in hard water. Lauric Acid: is the main acid in coconut oil and palm kernel oil. It is also found in human milk and
cow’s & goat’s milk. It’s used primarily as a cleansing surfactant (helps water to mix with oil and dirt so that they
can be rinsed away) and emulsifying surfactant (helps reduce the surface tension of water – making water “wetter”).
Sodium Lauroyl Isethionate: is a synthetic detergent used as a wetting agent and emulsifier.
Sodium Isethionate: is a synthetic detergent that makes a dense lather. Works equally well in soft or

Sodium C14-C16 Olefin Sulfonate: is mixtures of long-chain sulfonate salts and used as emulsifiers
and/or surface-active agents. According to Cosmetic Ingredient Review (CRI) Expert Panel, it is safe to use in rinse-off products and safe up to 2% in leave-on products. Tetrasodium EDTA: EDTA is an abbreviation for Ethylenediaminetetraacetic acid which is widely used
to dissolve scale (the hard, off-white, chalky deposit found in kettles). It is used as a chelating agent which can sequester metal ions such as calcium and iron and therefore, reduce the water hardness in laundry applications. Tetrasodium EDTA is the sodium salt of EDTA. Tetrasodium Etidronate: is the salt of Etidronic acid and is added to detergents and other cleaning
agents to prevent the effects of hard water. Etidronic acid – present in several cosmetic formulations -
is used for emulsion stabilizing and viscosity control and is recommended to be thoroughly rinsed from the skin after use. Etidronic acid is used in swimming pool chemicals as a stain inhibitor. Group III: These are not necessary for the soapmaking process and don’t improve the cleaning process. They
are for look/feel and market differentiation purposes only.
Fragrance: Loopholes in federal law allows the chemical composition of fragrances to remain
undisclosed. Fragrances, however, were voted Allergen of the Year in 2007 by the American Contact
Dipropylene Glycol: is a mixture of three isomeric chemical compounds used primarily as a plasticizer
(in plastic products and cement for example) and a solvent. Its low toxicity and solvent properties make it an
ideal additive for skin/hair care products. Sodium Sulfate: is the sodium salt of sulfuric acid and approximately 50% of its world production is
used as filler in powdered laundry detergents.
Sodium Stearate: is the sodium salt of stearic acid and is generally used for its lubricating properties
and to increase the thickness of the oil portion of cosmetics and personal care products.
Sodium Chloride: also known as table salt, is primarily used as a filler.

Titanium Dioxide: is the naturally occurring oxide of titanium and is primarily used as a white
pigment for a wide range of applications including paints.
Blue 1: is a synthetic dye manufactured from petroleum. It was previously banned in ten European
countries, but has been certified in the European Union.
Yellow 5: is a synthetic dye used as a food coloring. It was banned in Norway, Austria, and Germany
until overturned by European Union. United Kingdom’s Food Standards Agency called in April 2008 for a
voluntary phase-out of Yellow 5 along with five other colorings, due to a reported link with hyperactivity